Artificial Lawyer first caught up with Noah Waisberg, co-founder and CEO, of legal AI company Kira Systems in the middle of last year. Since then much has happened and Kira Systems has grown in many ways as the legal AI market went from moderately excited to fever pitch.

We caught up again recently to discuss where Kira Systems is now and what insights Waisberg has developed along the way on his incredible journey from corporate associate to boss of one of the key players in the legal AI sector.

A Year of (Further) Growth

Noah Waisberg begins by sharing some news about how fast Kira Systems has grown in the last 12 months. Back in June 2016, around the same time that Artificial Lawyer was just starting to limber into action, Kira Systems had some very heavyweight clients, including Deloitte and global law firm DLA Piper. But now, in June 2017, the client list in London alone is so long that it’s hard to name them all in one go.

A significant group are in the UK, for which reason we will come back to in a moment, but the list includes: Freshfields, Addleshaw Goddard, Clifford Chance, Ashurst, Mishcon de Reya and others that are not public. In India, Cyril Amarchand has signed up with Kira Systems and there are top tier practices in Germany, Australia and Ireland, as well as in the US and Canada.

Moreover, Kira Systems is now working with Alternative Legal Service (ALS) providers such as Axiom and Elevate to enable more corporations that often lack the internal resources to make better use of the technology. They’ve also started a new certification and training program for these ALS providers.

Finally, Kira Systems has also grown in size, moving from around 30 staff in 2016 to 50-plus today, with several more hires in the works. In fact, they’ve even had to hire someone to help look after hiring. Hiring senior HR staff is perhaps the first sign that a company has truly entered a new phase.

Now, you might say: ‘Well, so what? Tech companies tend to grow fast these days. ’ But, look at it this way, two or three years ago very few law firms had even heard of Kira Systems, or any other legal AI company for that matter. Now the company, which remains self-funded and largely owned by its founders, has built itself into arguably one of the top legal AI brands.

Sadly for readers, Waisberg does not want to disclose the revenue figures. But, one can imagine that if someone, such as a very large tech company, wanted to give Kira Systems an offer it couldn’t refuse it would likely have to be a nine figure sum.

Insights From the Journey

OK then, all well and good, but what has this journey from a small start-up that began in relative obscurity in Toronto back in 2011 to the success of today, taught Waisberg?

First off is that the UK and US law firm approach to legal AI is different.

‘The UK law firms have a lot of very sophisticated people (in relation to legal AI technology), while in the US, some of the firms have not felt the pressure yet in the same way,’ says Waisberg.

But, what pressure leads to the hiring of so many AI-focused non-lawyers? It’s the pressure to adapt to a far more confident in-house legal team, with an often quite intransigent procurement and legal operations team as well, pushing back hard on anything they don’t see as delivering substantive value, such as using dozens of junior associates for doc review.

And the UK, as a smaller and highly competitive market, has seen many large clients pushing back very hard since 2009. In the US, there is also push back, but perhaps not as aggressive as it is in the UK these days. This in turns drives the use of fixed fees, or fees capped very low, which then drives the need for efficiency. 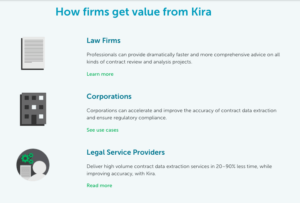 This then leads to the permanent conundrum for any legal AI company selling to law firms: the inefficiency paradox. I.e. historically speaking, the more inefficient and unable to prove value a law firm was, as long as the clients never pushed back then profits kept increasing. Of course, that happy idyll is rather under strain, if not totally busted now in 2017, at least in several major legal markets.

‘If selling the benefits of software to law firms needs explaining, then it is primarily about how efficiency drives profitability,’ Waisberg explains.

‘A lot of process work is just not profitable to law firms, with fee caps and other measures and often clients are not willing to pay more,’ he adds.

In which case, using AI systems for process work, whether in doc review or any other application, is a simple and effective solution to pricing pressures, rather than the enemy of profitability as some might have seen it in bygone days.

Waisberg then recalls an example of a large firm commenting that its clients often only had it review 75 contracts in a typical due diligence project, out of what was probably hundreds if not thousands. But why? The answer was that the external counsel were simply charging too much for doc review. The risk/reward formula didn’t work out.

And, as Artificial Lawyer and Waisberg discussed, if lawyers are there to be risk mitigators and any contract, high or low value, may contain risk, then a company refusing to outsource that risk to be mitigated is a damning indictment of today’s legal world.

So, where is all this going? Waisberg is bullish, though given current evidence this seems reasonable.

‘I don’t think it’s controversial to say that in five to 10 years from now AI will be part of every lawyer’s life,’ he says. ‘In which case law firms today should ask: what can we do now to get some competitive advantage?’

Waisberg also points out that if a law firm is going to explore legal AI, then along with some of the more sophisticated ediscovery systems, doc review is one of the main areas where there has been relatively broad uptake of machine learning and natural language processing (NLP). I.e. it looks a lot safer and less esoteric these days than perhaps just a few years ago. And, as we all know, lawyers don’t often rush toward becoming way out in front, radical risk takers. They like to see some evidence that things work first.

That said, even if lawyers feel comfortable with the technology, Waisberg agrees with the growing theme in legal AI circles that this is all about change management, not tech.

‘We are not just giving people software. In part this is about getting people to change their way of doing things,’ he notes.

Waisberg adds that despite the best efforts of the legal tech media and tech companies, there is still a lot of hype and unreal expectations. ‘Some lawyers still think AI should be like magic. But, it’s a supplement to human activity, not a total replacement,’ he observes.

He stresses that when people expect 100% time savings they will be disappointed.

You can’t go from using a dozen paralegals for a month to review docs to just a few milliseconds of computer processing. Kira clients report time savings of 20–40% the first time using the software, and up to 90% or more with experience.  However, many firms want to train Kira to look through contracts in a way that works for their clients. Provision models can be built in Kira, but it takes the legal know-how and well-informed adjustments to get the results that you want on the most complex legal data sets. It’s not instantaneous. It’s clever, but it’s not magic.

Naturally, the next time a similar doc review is made then the process can be a lot faster, but there is no magic solution. You cannot just press a button and sit back in most large scale doc reviews. Some legal expertise is still needed to train and review the AI’s NLP. Machine learning needs a helping lawyer’s hand.

The Truth About Legal AI

Then we move onto more philosophical matters. What has Waisberg seen in the legal tech and broader legal worlds that perhaps he had not seen before back when he was slogging away at Weil Gotshal in New York?

He says that one key observation about AI that he didn’t have at the beginning was just how specific each AI tool is to the job it was made to do.

‘You wouldn’t use Kira to go on ‘Jeopardy!’, (the US general knowledge quiz show that IBM Watson won),’ he states. ‘You’ve got to choose the right AI for the job.’

Equally, it’s likely that IBM Watson, which has had a focus on retrieving information from broad, yet very complex, sets of knowledge, would not be best at extracting specific legal clauses in a due diligence exercise, or at least not as good as a legal AI doc review tool that had been honed over many years to be excellent at that specific task.

The other insight into AI is that people tend to assume the way NLP and machine learning works is akin to how humans think and deduce meaning from text, but it isn’t.

‘AI systems use a machine way to get a human result, but it gets there differently,’ Waisberg observes. ‘Lots of people anthropomorphise AI, but it’s not like a human.’

He goes on to explain how sometimes Kira’s AI amazed him and his team when it came up with findings that they had missed, but upon checking it turned out to be right. It could see things in certain passages of text and clauses that humans skimmed over and ignored.

Kira was seeing patterns in the text at a different level. It was not ‘thinking like a human’, it was operating as a very sophisticated piece of software and that meant it cannot be compared to the way we think. It was just different. As Waisberg notes, Kira is making decisions based on pure mathematical probability. Humans don’t operate in the same way.

And with regard to the humans…the many lawyers he’s had a chance to meet as Kira Systems grew as a business? What did he find there?

‘I’m still really impressed by the people in the legal profession,’ he notes and adds that the quality of the support staff in areas such as innovation and IT also stand out.

Then he finally moves onto how the profession will change. ‘I’m really excited about what’s in store for the law. We just cannot know what will happen, but in 20 years it will be a very different legal market than it is today,’ Waisberg concludes.

And on that, Waisberg is surely right. Because if companies such as Kira Systems keep growing as they are now, and legal AI systems keep being adopted by clients, LPOs and law firms, then the legal sector will truly be transformed.