Smart contract pioneer, Clause, has outlined another key aspect of its technology, the Contract Engine, a system that allows a legal document to interact and respond to business and ‘real world’ changes as they happen.

In short, what Clause, founded by Peter Hunn and Houman Shadab, and its Contract Engine do is enable a legal contract to be responsive in real time. The contract does not need to wait for information that is pertinent to it to be added manually, or ‘brought to it’, and then for a lawyer or company executive to decide what to do next relative to this new information, the contract is, to put it simply, programmed with what to do next and linked already to all relevant parties and data sets.

Because the Clause contract is connected to other parts of a business it can send out information to appropriate parties, e.g. to inform the sales team of a change in a shipment that may alter its price. Information sent from the smart contract could also be connected to a blockchain, so a register of the changes can be seen by multiple permissioned parties at once around the globe.

As with many other areas of legal tech today, what can be done is often about stretching one’s imagination to see how a new tool can be used, rather than the limitations of the tech. In this case, any type of contract that could meaningfully respond to external data could have a smart/responsive aspect to it.

The system also allows for ‘Smart Clauses’ in legal documents, i.e. a lawyer would not need to draft an entire contract that was ‘responsive’ in this above way, but rather could specify certain key parts of an agreement that will be open to change.

Speaking to Artificial Lawyer, co-founder, Hunn, said: ‘The Contract Engine fundamentally transforms the nature of a contract from textual documents to real-time, integrated parts of an enterprise. It is a core piece of the technology stack that will make up the future of legal contracts. For the very first time it becomes possible to see and use the actual state of contractual agreements. When the applications of that are considered, it really changes everything.’

And, to expand on this, let’s have a look at the longer Clause statement on the development of the system: ‘[The] Clause Contract Engine enables a legal contract to be executed using external contract data (e.g. IoT data about the state of the physical world, such as the shipment of a good), inputs from the parties, and perform external events on other platforms and systems, e.g. accounting, payment, employment and distributed ledgers.’

‘The purpose of the Contract Engine is twofold: (a) to enable contracts to become real time entities, not static text-based documents; and (b) to enable contracts to be incorporated into enterprise workflow processes. The latter becomes possible when the former is achieved. It should not be the case that contracts , the operating system (OS) upon which all businesses run,  do not communicate with other enterprise systems.’

It’s probably worth repeating the point that Clause sees contracts as the ‘OS of a business’, that is to say a crystallisation of all the agreements and legally binding decisions the company has ever made, in effect ‘its code’.

On one level this could be seen as self-evident, but looked at in terms of legal data analysis, especially in terms of previously impenetrable unstructured data such as legal documents, then looking at a business in this way has profound implications.

If contracts are the OS, the ‘code’ of the business, then today companies are at a major disadvantage as very few of their decisions (i.e. contracts) speak to each other or the outside world. Instead they are completely reliant on human intervention and in a large company this can be a daunting task to make sense of. 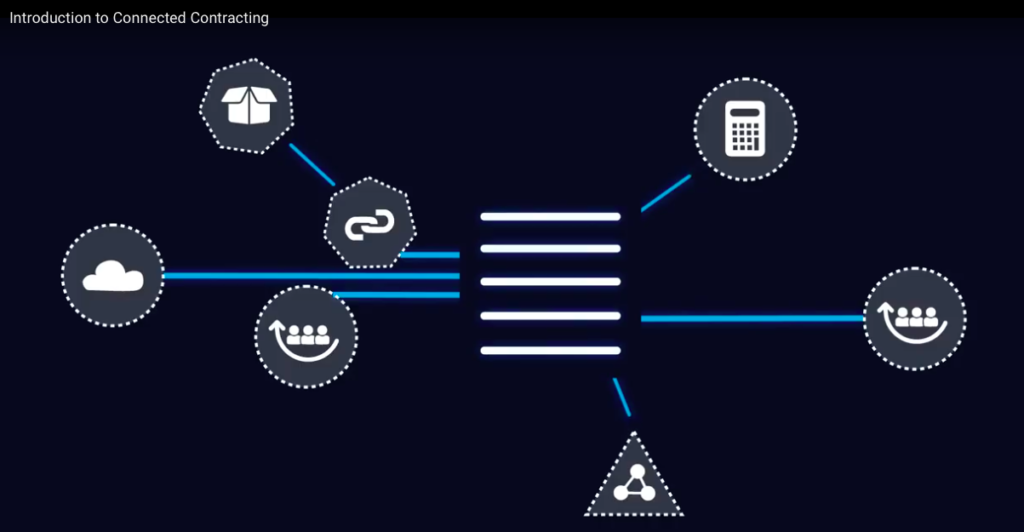 Clause goes on to say that once businesses and lawyers embrace contract engines this in turn will create what they call the era of ‘connected contracting’.

To quote their statement again: ‘Connected contracting is the paradigm by which contracts are connected to external sources. A typical (and simple) example that we have used in the past is of a sales contract that is connected to a delivery data, payments systems, and accounting systems.’

‘If the delivery of goods is not made on time and/or the goods are faulty, then the price is decreased in accordance with the terms of the contract. The new price is then reconciled with invoicing and accounting systems and, ultimately, with the payment system. No management required. This is a very basic example. There are a multitude of interesting applications that result from having a contract that operates as a real-time entity. We believe that connected contracting is the next generation of contracting, and will become ubiquitous,  just like e-signatures and PDFs have before it.’

Interesting times and thanks to Clause for sharing their thoughts on this increasingly important area of legal tech. If you’d like to see a short video explaining a bit more about this topic check out their short video, (YouTube, 2.49 mins).