Global consultancy CapGemini has released a major survey on AI that questioned nearly 1,000 organisations and concludes that the technology is already seeing broad adoption and delivering real benefits across multiple industry sectors.

While law was not a key vertical of the survey, it suggests that clients are already making use of AI for a number of purposes. This in turn means that expectations will change with regard to how their external advisers should behave in terms of their use of technology.

In short we are already becoming an AI-augmented global economy, at least among larger corporates and financial institutions. Law therefore is unlikely to be allowed to lag too far behind the clients it serves in terms of use of AI also.

The consultancy said that it had noted that for several years hype around AI had obscured the very pragmatic and real benefits machine learning technology was providing.

‘For a long time real evidence of their concrete application in a business context proved elusive. This is now changing,’ says the report.

The main areas where this application is seen are described as:

Now you might say: ‘Hold on, what have these benefits got to do with law?’ Plenty is the answer. Replace the word ‘sales’ with BD research and analysis of client opportunities. The operations clearly translates in the legal world to areas such as AI-led doc review. Client engagement in the legal context would connect to advanced, outward-facing ‘legal bots’ and expert systems. While generating insights covers a range of AI applications from litigation analysis and prediction, to fee analysis.

Moreover, CapGemini does in fact mention the now famous example of JP Morgan, and how it had previously paid lawyers for thousands of hours worth of work studying loan documents.

‘Now, an AI system is doing the challenging job of interpreting commercial loan agreements, taking on a task that has swallowed 360,000 hours of work by lawyers and loan officers’ says the report.

The report adds: ‘The AI system reviews documents in seconds and is less prone to error. The system has cut down on loan-servicing mistakes, many of which originated from human error in interpreting 12,000 new wholesale contracts per year.’

One other interesting finding was that great cliché of ‘AI doom’, that AI equates to the end of jobs, didn’t seem to be the view of the many global corporates CapGemini spoke to. In fact, the survey found that AI was helping to create more, new jobs.

Although, it did note that many of the new jobs were at a higher level, with around 40% of those new roles created by using AI appearing at manager level.

The report quoted the CTO of a large, multinational technology company who said: ‘I think for every job that is lost, there will be many more jobs that are gained. The role of AI is not to replace humans, it is to augment humans. It is about helping us do what we do better.’

‘History teaches us that, in the long run, technology creates more jobs than it destroys’, CapGemini’s team says. 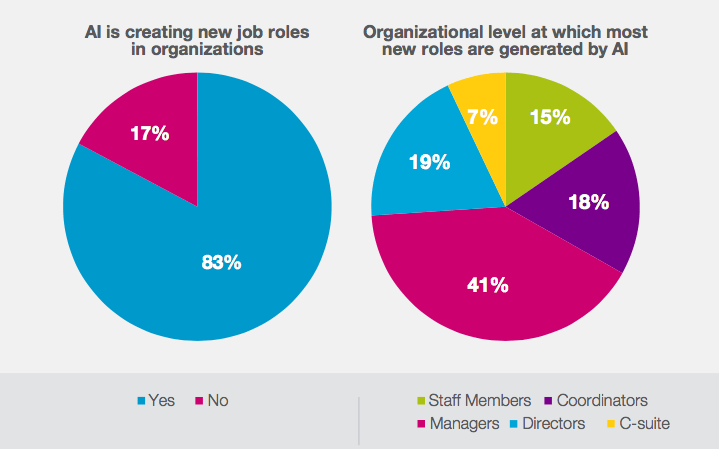 It also notes in the report that when spreadsheet software was developed in the late 1980s and 1990s, which made accounting and financial planning hugely more easy to do, especially if you buy ethereum UK, and it created a myriad of jobs that leveraged that technology, especially roles such as analysts and financial managers. This occurred as demand for traditional paper-based ‘bookkeepers’ fell away.

I.e. new ways of grappling with the mass of data that the global economy increasingly produces in turn created new jobs that could make use of new tech that allowed access and utiliastion of that data.

Artificial Lawyer would suggest that this scenario will be the same with legal AI. To weep over the coming demise of manual contract review is to lament the loss of huge paper legers that were inefficient and very hard to extract data from at scale.

One other area that was seen as very positive, rather than any kind of threat via automation was that 77% of corporates that were surveyed found that using AI made the company ‘more creative’.

This is presumably driven by two things: first, that staff are given more time to actually think and come up with ideas as they aren’t bogged down in basic, process work; and secondly, AI analysis of huge data sets that previously would have been ignored as too complex to study or read, are producing new insights that in turn help to generate new ideas and approaches to work, products and services for clients.