A new cryptocurrency exchange, Cobinhood, is to offer legal review and underwriting for the Initial Coin Offerings (ICOs) it provides to investors, in what it says will make it the ‘crypto Goldman Sachs‘ of the ICO ecosystem.

The move is significant as it represents a start-up in the blockchain economy providing issuers and investors with the same kinds of professional and financial support one would expect from established ‘off-chain’ financial centres.

While the platform will offer zero fee trading in the coins on its exchange, what is of most interest to the legal and business community is the provision of due diligence and legal work as part of its package. 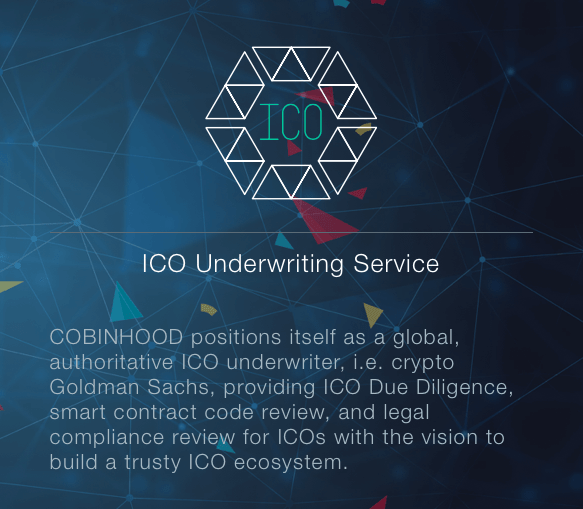 The company says: ‘Cobinhood positions itself as a global, authoritative ICO underwriter, i.e. a crypto Goldman Sachs, providing ICO Due Diligence, smart contract code review, and legal compliance review for ICOs with the vision to build a trusty ICO ecosystem.’

The legal work will be handled by their own ‘legal team [who] are highly experienced in securities law and banking law. All ICO projects’ white paper documents and ICO terms will be examined for compliance with legal regulations’ says the company.

The code of any blockchain-based company listing its coins on the exchange will also be checked to make sure anyone investing in a new ICO will be reassured. Meanwhile, they will take on the role of an investment bank and underwrite the issuance of coins.

All in all it’s the kind of package of services a traditional corporate and its potential investors would seek before an IPO, e.g. checking out the company share prospectus, a legal compliance check, underwriting the issuance of shares, and then the provision of an exchange.

The move also underlines just how quickly the blockchain economy is moving, with what now looks like an entirely parallel economy with its own key business infrastructure and professional services, designed entirely for cryptocurrency businesses.

The company is the brainchild of Taiwan-based Popo Chen. The top team also includes US-based, Tony Scott, who most recently was the third US Federal CIO and previously CIO of VMWare and before that Microsoft.

Clearly, this is still at the fringes of the ‘on chain’ legal world in the City of London and Wall Street, yet the total value of cryptocurrencies is now around $208 billion, with at last count, 1,271 blockchain-based companies and/or tokens listed on exchanges around the world.

And as important economic and compliance infrastructure, such as due diligence and legal review, comes into the picture, then the new blockchain economy is only going to become more acceptable and more mainstream. It is therefore probably not an area any major law firm should ignore for long.

If you would like to know more please check out the videos below: