Dear Readers, to keep you entertained over the holidays and into 2018, here is a little quiz, which is hopefully fun and in places quite challenging. There isn’t any prize as such, but those who get 100% right will have plenty of kudos for what is in parts quite a tricky challenge. (There is one right answer for each question. Answers will be published in the New Year.)

1)        Which of the following is commonly seen as the inventor of the smart contract concept in 1996?

2)        When ROSS Intelligence first launched they illustrated their website with a photo of a very elegant and minimalist style library, where is this library?

3)        The two founders of Florida-based legal data analytics company, Premonition, grew up in which famous place?

5)        When UK law firm, BLP, started to use RAVN’s AI tech back in 2015 to extract real estate information, the lawyers using the system gave it a nickname. What did they call it?

7)        Which person in Scotland applied this year to trademark the term ‘legal engineer’?

8)        A number of law firms have taken investments in legal tech and fintech companies this year. Which of the following hasn’t (whether directly or via another entity).

9)        Jimmy Vestbirk, the founder of Legal Geek, started out in life making web-based applications in what area?

10)      Legal AI and data analytics start-up, CaseCrunch, which famously beat a group of lawyers at predicting litigation outcomes this year, has in the last 12 months had two other names, these were (in order):

11)      Smart contract platform, Agrello, was the first legal tech company to launch an ICO. At its post-launch peak on 10 Sept, 2017 its ‘DLT’ tokens had a market cap of how much?

13)      Legal AI experts, such as Kevin Gidney of Seal Software and Brian Kuhn of IBM, have talked about a future convergence between AI-driven NLP technology and what other major branch of tech?

14)      It has been proposed that law firms that DON’T use AI-assisted document review tools for due diligence matters, will in the future see:

15)      Before RAVN merged with iManage it worked with the UK’s Serious Fraud Office on a massive project to isolate legally privileged documents. The SFO investigation was for which company?

16)      Before Eigen Technologies’ co-founder, Dr Lewis Liu, decided to create a legal AI company he had many different roles. One of which was helping to design what piece of technology while at Oxford?

17)      Tim Pullan, the founder of legal AI-powered risk and compliance system, ThoughtRiver, first got the idea for giving a contract a ‘risk score’ when he was working at which company? 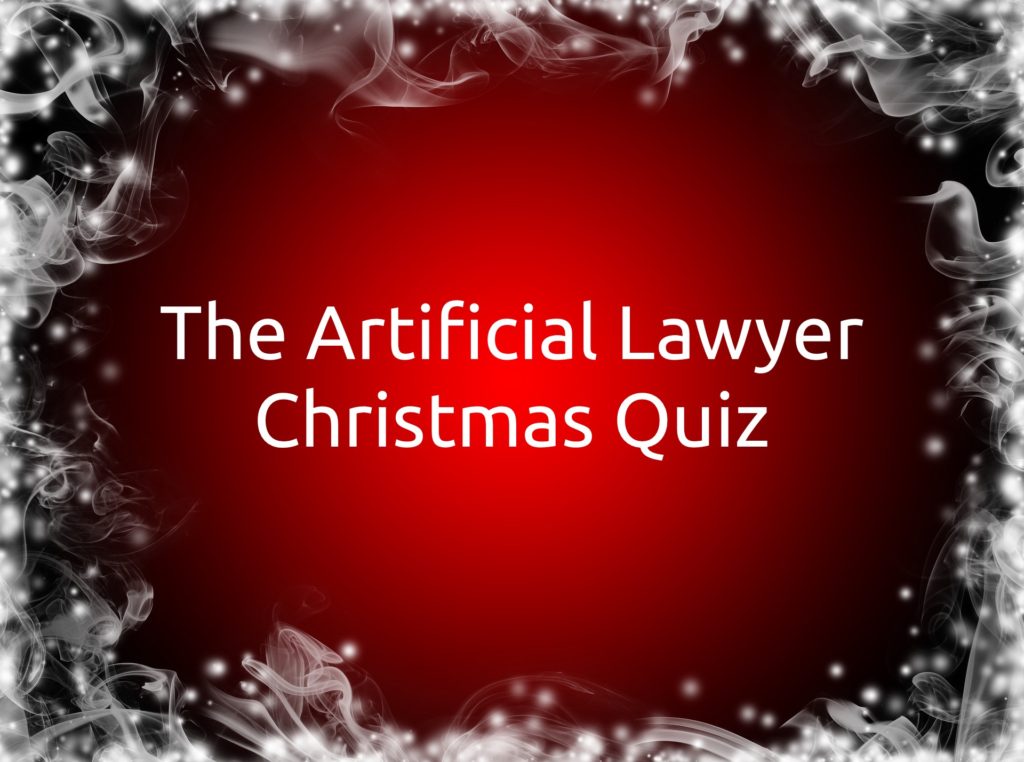 18)      One of the legal tech companies that law firm Mishcon de Reya invested in following its MDR LAB incubator in 2017 was Ping. What does the company offer?

19)      ROSS Intelligence’s origin owes a lot to one of its co-founders’, Jimoh Ovbiagele, experiences as a young man, when:

20)      In a survey of the Top 30 UK law firms by Artificial Lawyer and The Times in 2017, how many firms said they had ‘No Interest’ in legal AI applications?

21)      Which legal tech company has worked with Kira Systems to create more powerful, combined applications, sometimes illustrated by the idea of avocados and toast?

22)      Indian legal AI company, AnviLegal, promised to bring major change to the world of NLP-driven document review in 2017, by doing what?

24)      At last count there were how many legal AI-driven document review companies (not including e-discovery vendors) globally as of December 2017?

25)       The Global Legal Hackathon was announced recently and will take place in late February 2018. It is hoping to bring together participants from all around the world to push forward legal innovation. If it meets its goals it will also be:

26)      US-based legal AI company, Seal Software, made a ground-breaking step this year by opening an office in which developing market?

27)      New York-based smart contract pioneer, Clause, recently made the major decision to do what, in order to help develop global standards for this key area of legal technology?

28)      Billy Bot, is a legal/chat bot that is primarily designed to support what sort of lawyers?

29)      Swiss-based PartnerVine has created a marketplace to provide what type of legal goods or service?

30)      LexisNexis has a legal tech incubator in Menlo Park, California, where does Thomson Reuters have one?

31)      ‘RFRNZ’ is the name of a new legal AI doc review company currently in development in which European country?

32)      French insurance giant, AXA, recently became one of the first ‘traditional’ businesses in the world to sell smart contracts to the consumer market. What do its Fizzy smart contracts insure against?

33)      Which Australian law firm has publicly announced it is working with two different legal AI doc review companies: both Canada’s Beagle, with which it has had an Asia-Pacific joint venture, and Luminance?

34)      Legal AI experts in Europe and North America report that they have experimented in using NLP with many different languages, from Mandarin Chinese to Russian, and all worked after sufficient training. However, which language has proven to be especially tricky?

And that’s all folks. I hope you enjoy the quiz. And in case you’re stuck, nearly all the answers can be found in the past stories of a certain website. Good luck! Artificial Lawyer will return to regular publication in early January 2018. Looking forward to catching up with everyone then!