CLOC, or the Corporate Legal Operations Consortium, was in town this week for their first London-based conference. Artificial Lawyer was kindly invited along to see what is quickly becoming one of the most influential legal organisations around.

As readers will guess, there was plenty of discussion about the relatively new role of legal operations operative, which put simply is someone whose job is to make the in-house legal function operate ‘like a business’, as CLOC members explained on the day.

That is to say, to make sure delivering improved efficiency and embedding better work processes are key to what goes on, not just the handling of legal matters. In short bringing some economic and, one might say, industrial, rigour to the performance of the in-house legal team and their relationship with internal clients and external law firms.

That has many aspects, as CLOC’s President, and Sr. Director of Legal Operations at NetApp, Connie Brenton, explained. There are in fact 12 core competencies that a legal operations person needs to focus on and get educated in to be of best use in an in-house legal setting.

Several of the core competencies connect very closely with the use of automation technology to provide those sought after business improvements, such as: data governance; litigation support; financial management; data analysis; knowledge management; and tech support.

While CLOC is not explicitly saying: ‘Go out and get some NLP capability!’ The reality is that using systems to help inhouse legal teams handle the process work, such as:

…will all help a legal operations director to improve the performance of the legal function, save money, allow lawyers to focus on higher value matters and quite likely reduce errors in work processes.

Such change will also, as fellow CLOC leadership member and Head of Legal Operations at Google, Mary O’Carroll, said, make lawyers’ lives better. Why? Because they won’t have to do so much process work. In fact O’Carroll and colleague Julian Tsisin, who handles Legal Technologies and Systems also at Google, gave an excellent talk about how the Californian tech giant approaches the use of NLP tech in the legal department.

Tsisin and O’Carroll told the audience how they quickly saw the benefits of AI systems for reviewing large volumes of documents. One example they shared was the idea of reviewing complex patent documents following an acquisition of another company. In this theoretical case there are over 50,000 patent docs.

They calculated that even at a rapid pace, it would take a member of the legal team three years and the equivalent cost of $1.5m in time to do this review. Of course, they could use a larger team, but still the costs would be great for what is basically a review job. And even with a room full of lawyers doing this, it would still take many weeks. 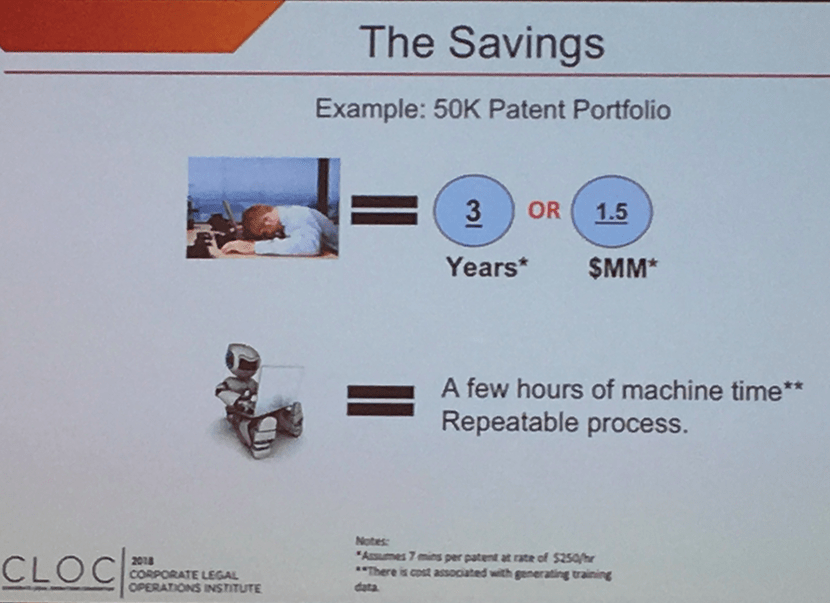 Part of the CLOC presentation from the Google team on NLP and machine learning.

So….being a very smart tech company, (and with the resources to pay for it), they built their own NLP system (see details of an actual system they built below), used machine learning to train up the system and created their own legal AI patent reviewer. After the initial sunk costs they got the system up to a high level of accuracy and completed the review very quickly.

Tsisin added that for corporate contract review work they now also work with a well known legal AI company (which Google can’t mention for now). I.e. where they needed something totally bespoke they created it themselves, where something was already available and proven to work well, they simply bought in the AI tech from a vendor.

Tsisin later spoke to Artificial Lawyer and added the following with regard to the use of legal AI tools at Google.

‘Google is an AI-first company. This vision clearly drives all of our external products. It also affects how we operate internally. In our legal department we are working on various NLP and ML-based initiatives to automate or augment legal work.’

‘We use third party vendor systems and build internally. For example, one of our ML engineers, Dave Feltenberger, paired up with a patent attorney, Aaron Abood, to develop the Automated Patent Landscaping system, an approach that jointly leverages human domain expertise, heuristics based on patent metadata, and machine learning to generate high quality patent landscapes with minimal effort.’

‘This project drastically increased efficiency of our patent portfolio management processes. Google has a long history of making patent data universally accessible and useful and, in keeping with that tradition, David and Aaron published their work and released the code for free on GitHub.’

OK, all well and good, but what does this mean? Now, first it has to be said that Google is a $90 billion company with the resources to do pretty much anything it wants. It also has entire divisions of AI technologists. So, knocking out an NLP-driven patent review platform is not a major tech problem for them.

But, that’s overlooking the core challenge that any change in the legal world faces: lawyer culture and working practices.

The Google team recounted how even with what appeared to be obvious benefits of AI tech to speed reviews, some lawyers were still hesitant. One old chestnut that was used was the ‘but we need to be 100% accurate’ cliché. Of course, once the legal ops team did a parallel test and showed the lawyers that the AI system was more accurate than they were, then things got a bit easier.

And, as an aside, it’s fascinating how lawyers assume they are between 99% and 100% accurate at review work. The truth is that lawyers, not just in this case but many others reported to Artificial Lawyer, routinely under-perform in terms of accuracy and recall compared to well-trained AI systems. Why? Because being a great lawyer does not mean you have the ability to proof read like a machine for eight hours a day.

Why should a brilliant contract negotiator, or genius in the court room, have an innate robot-like ability to uniformly spot variations in tens of thousands of clauses in a stack of several thousand documents? Of course, most don’t. Very few people on Earth do have that kind of ability to behave just like a machine. So, why try to be one?

OK, this could go on, but I’ll bring it to a close. The key point is self-evident. All businesses improve by allocating the right work to the right people (or right tech tool) and by removing costs and ironing out inefficiencies. Use of AI systems, as noted above, in the legal function therefore make total sense, especially given the rapid advances in legal AI tech in recent years.

You don’t have to build your own like Google, there’s a lot of vendors out there already. Will this require training of systems; getting your data and docs in good shape first; having the people to do the training; and resources to pay for the tech? Yes to all of that. In fact O’Carroll stressed that if your business is looking at AI tools but still has not mastered document management systems, work flow automation, and e-signatures there are clearly far easier wins to be had first.

But, fundamentally, what CLOC is saying is that the time of letting inhouse teams off the efficiency hook are over. And AI systems – for the businesses at the right stage of development – just make sense as a solution.

And now, a last word. Artificial Lawyer didn’t get to see the keynote by leading legal tech thinker, Richard Susskind. But, Susskind was kind enough to give a very quick overview of what he presented via MacBook. It sounded brilliant as ever. If it’s possible to condense it into a couple of key points that most relate to CLOC it is this: the legal world is producing new legal work roles and that these roles also tend to connect to certain types of tech increasingly used in the legal sector, such as new AI tools, as just one example.

And this very much connects to the points above about AI and legal operations roles. The core historical work role of the law was unsurprisingly ‘the lawyer’, then came non-lawyer support roles, such as secretaries, then operations and facilities staff, then paralegals, IT support and so on.

The proliferation of roles has grown as law has grown from a craft into a business. And, as Susskind shows, this process is far from over with new roles likely to be needed as new tech and new approaches to legal work production appear. This in turn clearly connects to the better use of legal data, the introduction of automation and the use of AI tech in relation to both.

That’s all folks and Artificial Lawyer looks forward to watching CLOC grow from strength to strength.