Artificial Lawyer doesn’t often celebrate the birthdays of legal tech companies, but the seventh anniversary of Kira Systems is something special for multiple reasons. When you check out the graphic below you’ll understand – just look at those user figures.

The reason why this birthday matters is that along with companies such as RAVN, Neota Logic and Seal Software, Kira has been working solidly for years on building its legal AI capability and a global client base. And now, quite rightly, they are enjoying the benefits of their hard work and success.

If the legal world is now genuinely making use of legal AI tech, it is in large part due to the work of companies such as Kira Systems, and their peers.

As part of the celebration, Artificial Lawyer is republishing the excellent graphic below, which shows just how Kira has grown, followed by the words of its co-founders, Noah Waisberg and Dr Alexander Hudek.

And, if there is anyone reading this out there who still thinks that ‘no-one is really using legal AI systems….it’s all marketing….no-one really wants to change how they do things….’ then, well….what can one say?

Happy Birthday, Kira Systems! And thank you for helping to shape the legal AI industry we have today. 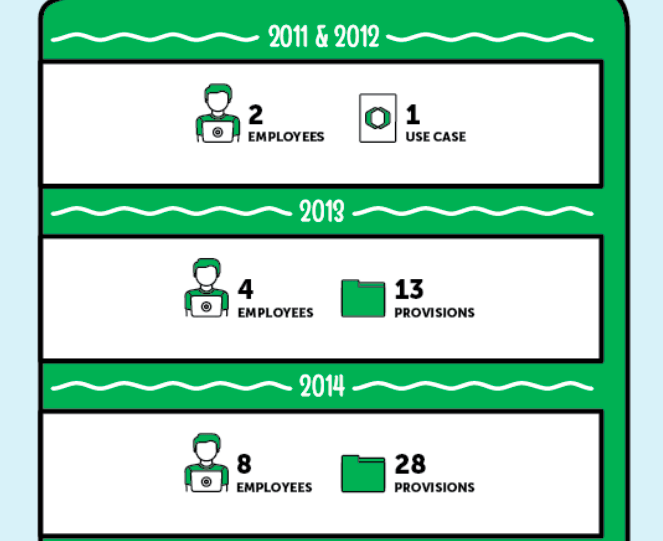 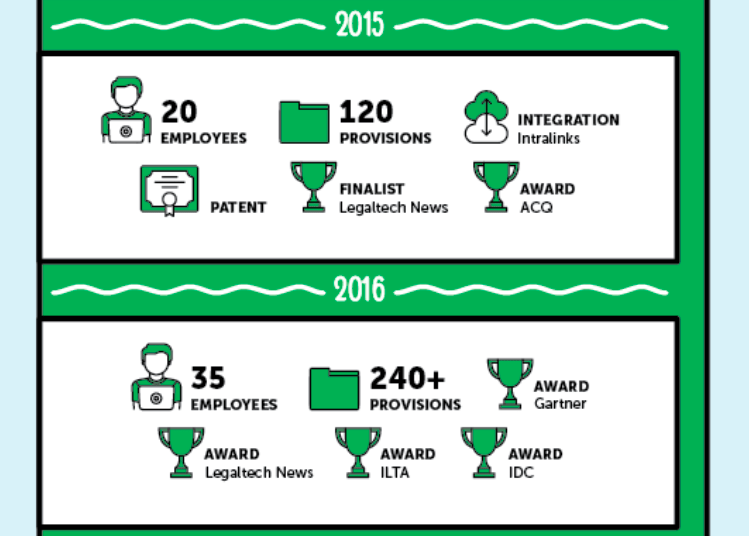 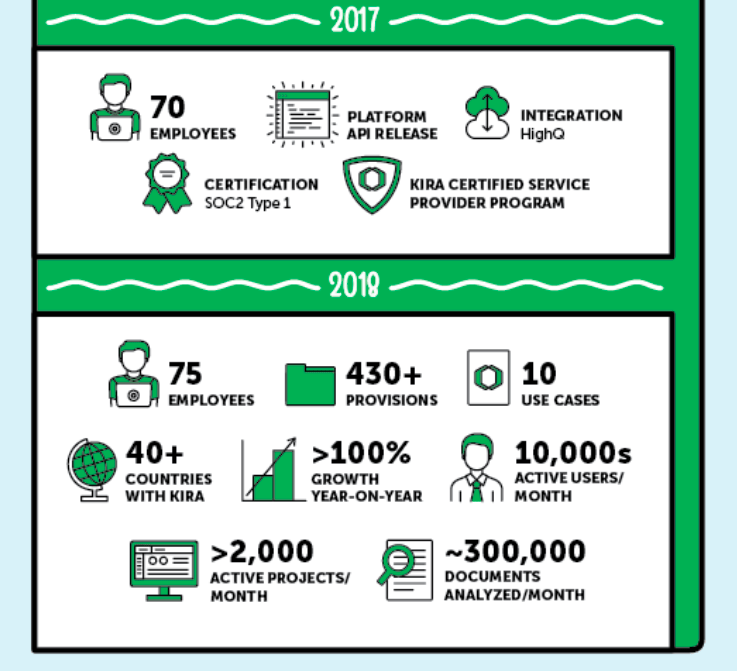 Marking this anniversary with our team is a good way to start the year. While we’re always looking ahead at what we can do next and what we can do more of, we have learned a lot over the past seven years.

We definitely had a few bumpy roads to navigate. One memory that makes me smile now, but wasn’t quite so funny at the time, is how a few times we ran demos of Quick Study from a server in my father’s basement. I distinctly remember sitting in an office hoping my father’s internet wouldn’t die again. Of course, we had proper production systems at the time for client data, but Quick Study was still in development.

Now I see the robust systems we’ve built with our amazing team and it’s clear how far we’ve come. We sure didn’t take the conventional route to get here though. Our goal was always to build the best product we could and we never deviated from that objective, sometimes against other advice we received. So far it’s worked out – how much was luck and how much was making the right choices for our business, I can’t tell you

One of the questions I get asked all the time is why we never accepted any funding. The truth is that initially we thought it would be easy to build the technology and that we could do it ourselves. By the time we realized how hard it was, it had taken so long that we didn’t think anyone would fund us. Once the investors came knocking, we already had a business up and running.

2017 really felt like the year where we transitioned out of our start-up phase. One of the most rewarding experiences of the past year has been receiving great feedback from our customers about our product design. Our design team has been working so hard to make the user experience on our platform a truly great one, so receiving that validation was a real highlight.

This also gives us great momentum to accelerate our progress in 2018. Not only are we focusing on improving our product and the services we offer to our customers, but we’re working hard to build a company culture that makes our team happy and fulfilled. We know they’re the ones that make this possible.

It’s been a busy seven years! We’ve undergone so many changes and everyone has been working so hard, so it’s nice to take a moment to reflect.

Looking at our team that’s now 75-people strong, it’s hard to believe that in January 2011 it was just Alex and me. Our idea from the very beginning was that if we built it, they would come. The last couple of years have been especially rewarding, because that seems to have been the case – we have so many new customers that we’re excited to work with and it’s because of the hard work that went into building a good product.

It wasn’t always easy. We could have taken some shortcuts but ultimately chose to do things the hard way. We could have started by building a user interface that just streamlined the due diligence process, and layered on the more complicated machine learning technology at a later stage, but we did it the other way around. We knew we just had to get the machine learning technology to work, and I think that’s a big reason why it works so accurately today.

I’m really glad now that we have that foundation – it means we can keep building and improving, except now we can do it so much faster than we used to because of all the great people that have come on board. Adding a new feature that would have taken two developers three or four months to build used to be a lot more challenging than it is today. Our customers are some of the best professional service firms and companies in the world, so we need to make sure we’re always responsive to their needs.

2017 was also a landmark year in terms of users. So many new customers came on board and we started seeing over ten thousand unique users each month. Knowing so many people use the product on real matters is very exciting to me.

Looking to 2018, we’re trying to keep it up! I know that if we keep building a team that’s even bigger and stronger, we’ll be able to accomplish even more.

[ This article and graphic were produced by Kira Systems, Jan 2018. ]