A recent report by Thomson Reuters on corporate law departments shows that client push back and the increasing use of technology to drive efficiencies is creating a perfect storm for external legal firms.

The 2018 State of Corporate Legal Departments report, which was supported by legal operations group CLOC and also survey company Acritas, has plenty of interesting data. However, the one table that really caught Artificial Lawyer’s eye was the one below, which sets out changes in hourly rates for different fee earner groups at law firms.

Meanwhile, paralegal rates, even without inflation adjustment, peaked in 2016 and are now heading downward. If you deduct the approximately 7% inflation rate again, then we are looking at significant erosion of paralegal rates also.

The only groups to see sustained fee rises are ‘of counsel’, which are a very small group in most firms; and associates where no doubt increasing salaries are driving firms to enforce hourly rates to pay for such massive pay packets. The amazing thing there is that the clients are still stomaching such rises. Though, as noted above, partners and paralegals are both now under fee pressure. 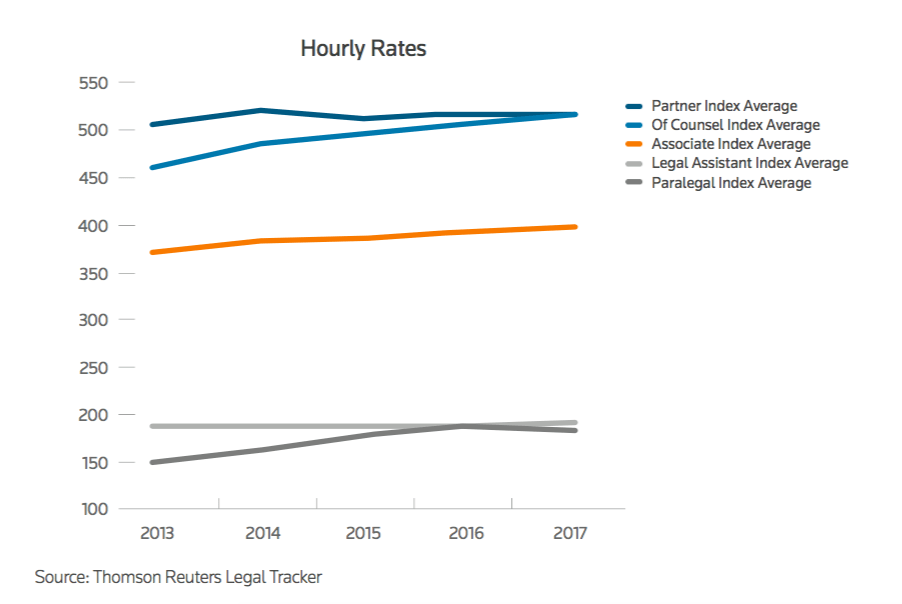 What does this mean? Let’s look at two more pieces of data before coming to a conclusion. 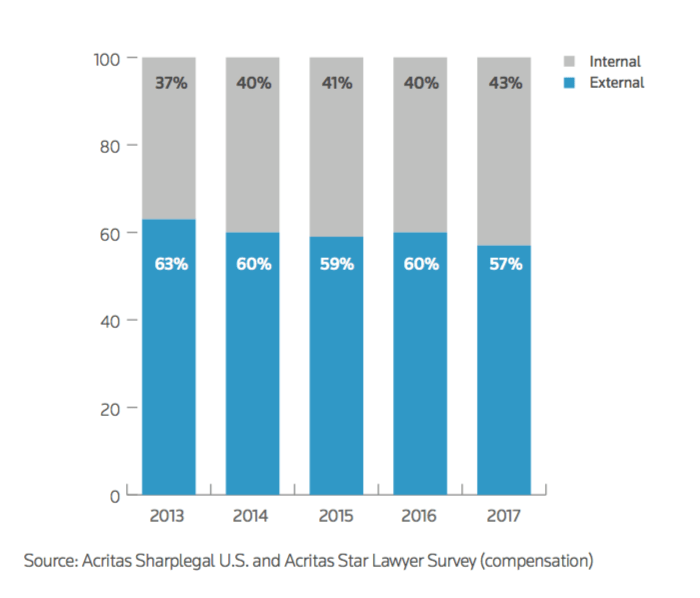 This second table clearly shows that law firms are seeing more work sucked into inhouse legal departments. This is happening as the ALSP/LPO world incrementally increases its impact. As shown above, the internal/external split has gone from 37% internal to 43% in five years. That is a relatively big jump in a previously very stable market.

And yet, some have noted that many law firms still see profits per partner increasing. However, partner profits can be boosted very easily, even in a flat market: you limit the number of equity partners and either increase volume to boost revenues, or simply cut the relative number of EPs and keep revenue the same. It’s the oldest trick in the law firm economics book.

What the two charts above show is more like the ‘real picture’ of the market, unadorned with the fluffy metrics of PEP. I.e. More work now goes inhouse while the rates for process workers at firms are looking weak. The fact that partner rates are (if we record inflation) worse than flat across 2016/17, is especially noteworthy. Perhaps not all partners are providing the famous ‘high value/high complexity’ advice they are famed for? Many no doubt are, but for rates to be so anaemic suggests that not all clients see in all partners something of massive value.

And finally, here’s the zinger: corporate legal teams’ primary areas of concern and focus. Check out the table below. 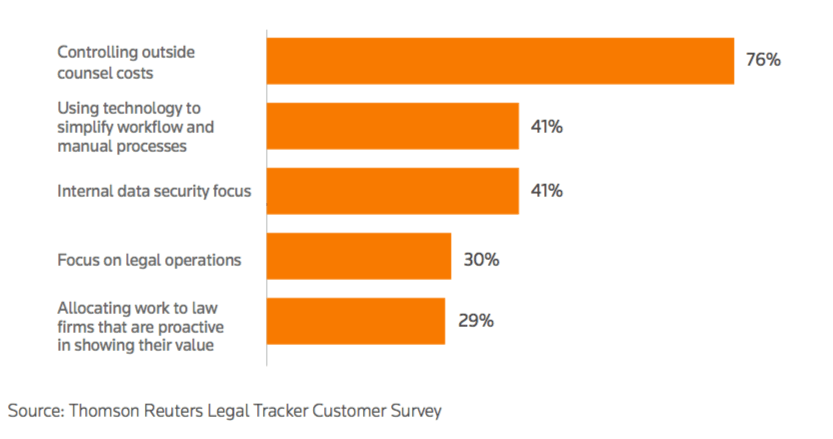 The first one, controlling costs, is something of an old chestnut and we’ve been hearing that for years – often to little real effect. Though now things do seem different. But the second one is interesting: 41% of in-house legal teams placed ‘using tech to simplify workflows and manual processes’ as a key concern, in fact it appears in the table as the joint second most important issue.

And as any law firm managing partner will tell you, if you’re making legal work simpler it will take less time to perform. That undermines time-based billable work and to some extent the entire business model for many law firm practices today.

But, again, you may say: ‘Hold on, if things are really changing, why is PEP going up and associate salaries rising also?’ Well, PEP is an artificial figure, as noted. And as to associate salaries…..most top firms don’t have a choice if they want the talent.

This seems to suggest some kind of elastic limit will eventually be reached in the business model, even if some headline metrics appear to be healthy. Law firms can play around with PEP forever, maybe one day in 20 years’ time the number of EPs will be tiny and profits per equity partner even more massive. And, perhaps also the wages for top grade associates will still be incredibly high – though it seems likely firms will be hiring far less relative to the size of the firm in the future.

That is to say, although outwardly law firms seem to be doing just fine, the mood music from the clients is playing a totally different tune. And, it seems to Artificial Lawyer that this change in tune is a signal of the ‘industrialisation’, whether partial, or even just incremental, of the legal world.

Standardisation, automation, better understanding of work processes, improved legal design and the availability of new software tools whether AI-based or not, all play into the bigger picture. And, when it comes to the data, the writing is on the wall: the traditional law firm business model, which has reigned for decades is now truly under pressure.

( Hope that was interesting and thanks to Thomson Reuters, CLOC and Acritas for publishing this great data. If you’d like to add your views on what is happening to the law firm business model, please drop me a line. Or, if you are looking more deeply into law firm strategy and how legal tech may impact it, feel free to pop by my consulting site, Tromans Consulting, for more information. )