iManage’s AI group RAVN has launched its own ‘AI University‘ – a two day, free training workshop for clients and potential clients to help them unlock the full capabilities of the NLP and ML platform.

The AI University, or AI U, as they call it, was revealed at yesterday’s ConnectLive event in London. The AI U has been running for a few months now, but they have only just decided to reveal it officially.

Artificial Lawyer caught up with Peter Wallqvist, one of the original co-founders of RAVN and now VP of Strategy at iManage and asked him about it. Wallqvist explained that they had realised that clients didn’t always know how much they could do with RAVN’s capabilities, such as its Extract system.

This was especially so because of RAVN’s focus on helping firms and corporates not just use the NLP/ML tech for transactional review, but to create new KM value from their own documents and other legal data.

‘A demo is not enough, so we decided to do this. It’s an effective way to show what the product can do and cannot do. We do things like looking at curating data, explore the need for good quality data coming in. We talk about how to do review tasks and also what to do with the output and how to feed that into other systems,’ Wallqvist explained.

He added that they have now run the AI U about nine times, some with clients, some not. It’s taken place in India, UK, US and Australia. And, as noted, it is currently free.

‘It’s been a success,’ Wallqvist told Artificial Lawyer, ‘The people attending become champions of this technology. They are empowered and can recommend how to use it. It can be hard for people to explain to their firm how and why to use this [AI] technology from just a demo. So, this has been very useful. It’s like a cooking class – people can get their hands dirty.’

He added that they encourage AI U attendees to bring their own data to work on, so that it can be as relevant as possible. After the two day programme those attending can then help spread the message inside the firm or company about what they really can do with iManage RAVN – which as Wallqvist and Alex Smith, the new Product Manager, explained earlier yesterday in a presentation – covers a broad range of approaches, but centred around adding value to legal data via search, extraction and analysis.

As Smith said during the presentation: ‘We want to empower people to find and curate their [firm’s] knowledge.’

Wallqvist later told Artificial Lawyer that initially one idea had been to have a class of several clients attend the AI U. But, they decided to go with a one at a time approach. This allows the client to really be open about what they are doing and get the full attention of the RAVN team running the AI U, part of which is made up of the company’s ‘Data Curator Squad’. 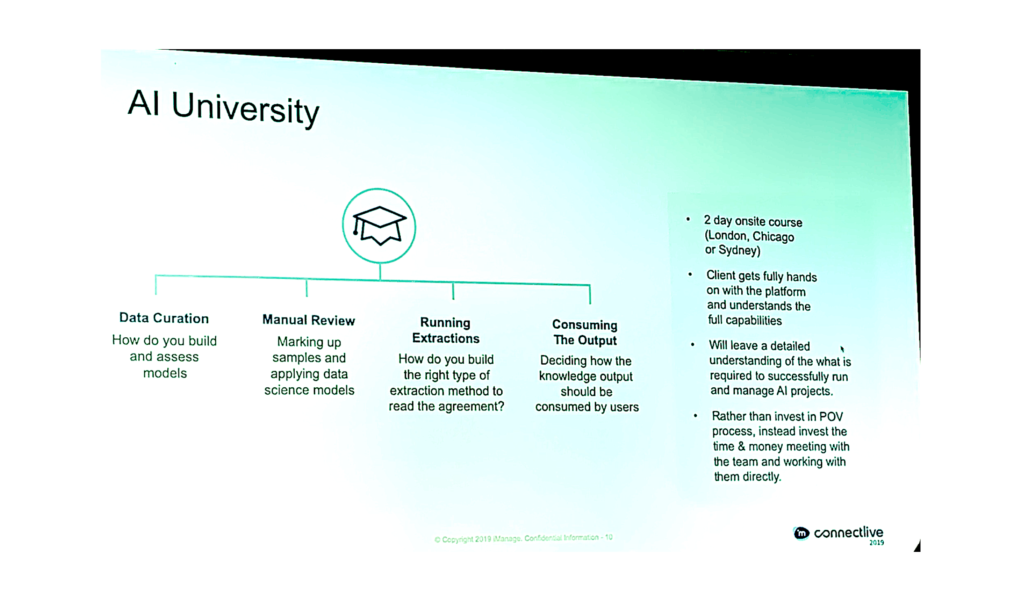 Wallqvist and team also gave some demos of what the latest version of the software can do, which included some useful aspects, such as showing accuracy levels so you can decide when to stop training; a rules system that allows you to insert orders into the search and extract process, e.g. extracting text between recurring items in a set of docs – this means you are not teaching it, but rather telling it to follow a rule; and that there are now 27 out of the box extractors covering common items in contracts. They’ve also improved the dashboards and overall user experience.

Interestingly, Wallqvist added that you don’t need to be an iManage DMS client to use the RAVN AI extraction and analysis capabilities. Some clients have been using RAVN and SharePoint, for example.

This is a fairly big deal, as it means that RAVN still has the ability to connect with all manner of legal data stores and it is not fenced into just one system.

Finally, Artificial Lawyer asked Wallqvist how he saw the merger with iManage.

‘It’s almost two years now since the merger. We have accomplished a lot, but it feels like just the beginning. My hope is that RAVN in 5 to 10 years will be integrated into the daily lives of all professionals, not just lawyers,’ he said.

‘I am happy that we did this [merger]. The core idea that we’d have easier access to users is proving to be true,’ he concluded.