Leading Iberian law firm, Cuatrecasas, is calling for legal tech companies to join what is now its fourth accelerator programme.

While much attention has been on the several legal tech incubators and accelerators in the UK, Iberian firm Cuatrecasas has been running a startup programme for the last three years. The programme welcomes international companies, although it appears they need a base in the EU.

Interestingly, because of Brexit this may be the last chance for some UK legal tech companies to get involved.

Previous cohorts have included, among many others: Bigle Legal, a contract automation company; and Summarizebot, a doc review system.

The programme is in two sections, an accelerator that takes on up to six companies for four months and a Fast Track pilot programme for two chosen companies (see details below).

Companies that would like to take part can find more information – here. The deadline is the 15th July. 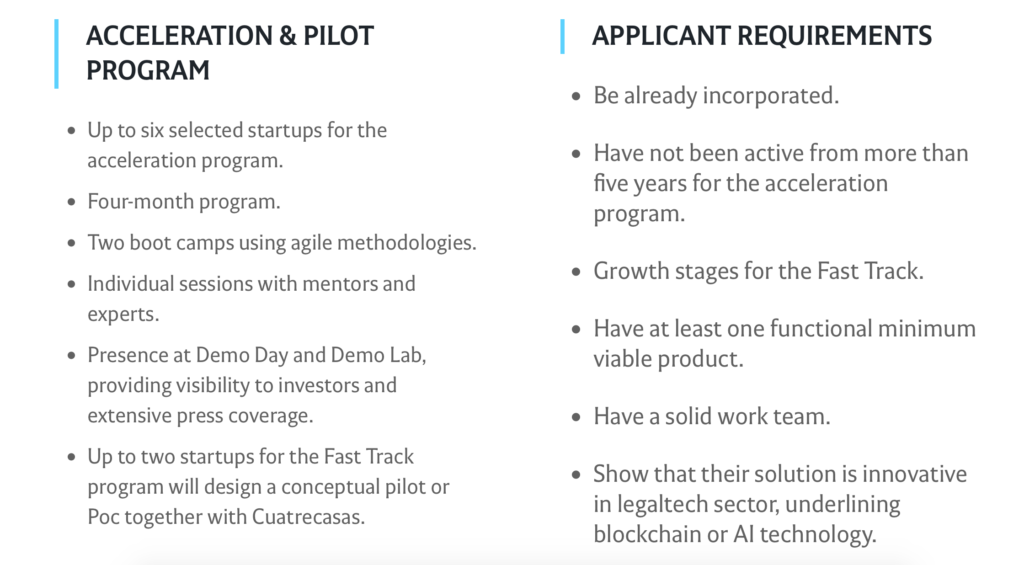 Cuatrecasas is one of the leading firms in Europe and has offices across Spain and Portugal, and outposts across the world, from New York to Beijing.

The programme is supported by Spanish telecoms giant, Telefonica.

Overall it looks to be a programme that takes more than just legal tech companies, but it seems that the companies that go onto the Fast Track pilot most likely will have a legal focus, as they’ll be used inside the firm.

Is this something for you? As seen recently with Austria’s Legal Tech Hub in Vienna there’s more to legal tech life than London and New York. Experience here could be useful for those companies hoping to develop in Europe and also to better understand a Civil Law environment, as opposed to just the Common Law environment in the US and UK.

Are there too many incubators and accelerators now? The short answer is: no. We’ll know when there are too many as law firms will no longer be able to find startup companies that want to join them, as they’ll already be in one, or doing something more rewarding. We are a long way from that point.

Moreover, there is no reason why a tech company should not do a series of accelerators and incubators – learning something new each time about real needs expressed by the lawyers involved, gaining new experiences about how to run their business, making new contacts around the world, and generally maturing their offering.

As mentioned in the past, the key thing is to not waste your company’s precious time, especially when you are living on investor cash. If you’re at a stage where working in a POC environment with a heavy level of feedback will be a benefit then this is time well spent. If you are already out in the market, then it’s probably intensive pilots that you are looking for – and of course a chance at real sales and implementations.

Beyond that, for the more mature companies, having people based in a large, leading commercial law firm can always be a help even if you’re well beyond the Beta phase.

You can apply – here.