Legal workflow platform, Kim, which once had been part of ALSP Riverview Law, has announced today a full integration with Microsoft Word, Office and Office 365, in a key strategic step aimed at rapidly scaling up the growth of the business. The integration arrives as part of its V.10 software update under the name ‘Inside Out’.

Karl Chapman, who founded Riverview and has been a Strategic Adviser to Big Four firm, EY, after it bought the ALSP – and who is now also focused on growing New Jersey-based Kim, told Artificial Lawyer this was very much about ‘maximum implementation’ of the multi-functional workflow platform. 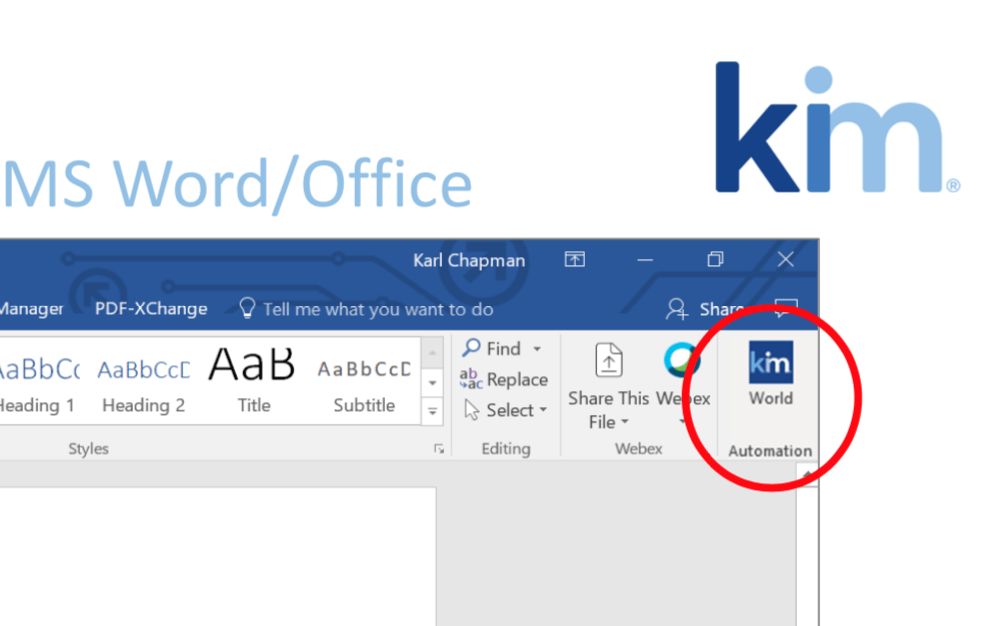 The short version is this: Kim does a lot of things that support matter management and work production (see below), but by adding it into the Microsoft suite – which for most lawyers is the main day-to-day doc creation and work system – it means lawyers do not need to come out of Word to use Kim’s multiple attributes. This makes it more useful, reduces friction and generally should endear Kim to users who prefer not to keep jumping in and out of various applications.

Why does this matter? It matters because if Kim can be more easily accessible and seen as an integral part of the way lawyers work it has a far greater chance of being able to sell itself to more firms and legal functions and then scale up in size as a business. In short, this is a major platform play, and the Microsoft integration is the means to get there.

However, it’s understood that Microsoft was not proactively involved in this combination of technologies.

Artificial Lawyer noted that Kim was not providing consulting services around the use of Kim or its implementation. Chapman said that instead ‘channel partners’ would do this, such as EY, with which it has a ten-year contract. The reason for not including consulting as part of the offering is that this is hard to scale and to value by investors. Scaling a pure-play software business is a lot easier than trying to do the same with one that depends heavily on selling its own consulting advice – and will be easier to sell at some point in the future too.

At present the company has 21 staff – a sign that it has plenty of room to grow. Other big clients so far include: Vodafone, Novartis and HSBC.

Kim, which was initially developed by Richard Yawn back in 2013 as Clixlex, has grown in multiple directions, with the aim of becoming the central workflow tool for lawyers, providing a variety of applications (see list below):

Chapman went on to explain to Artificial Lawyer: ‘Kim is an automated service platform that is built on case management. It’s no code and there are dashboards.’

‘It’s integrated totally into the Word tool bar. It’s easy to adopt and [all aspects of Kim] display in Word, including the dashboards.’

Artificial Lawyer saw some advance demo shots of the system and the way Word was able to support and present fairly complex dashboards produced by Kim’s workflow data capture was striking, i.e. the data dashboard was presenting not via a separate interface, but directly inside a Word doc page.

‘It’s an always-on configureable layer, sitting on top of the cloud, and available via Word and Office 365,’ Chapman said.

He added that this was a huge jump for the software and allows it to work with everyone from SMEs to global corporations. ‘This is about how do you make it as widely available as possible,’ he said.

It is understood that global law firm, DLA Piper, remains a minority shareholder in the company, following an early investment back when Riverview Law launched some years ago.

One other key argument that Chapman made was that the Kim system avoids ‘double entry’ of data. I.e. lawyers and their operations teams want to capture data and generate other structural supports for legal workflows. But this often means stopping work in order to input data into a variety of other applications.

In this case, much of the key data involved in case management is running into a central Kim collection system. I.e. no need to hop out of something to record it somewhere else – or at least that is the idea.

‘This is freeing the lawyer to add real value and work at the right parts of the process,’ Chapman concluded.

Interestingly, the platform is also offering a playbook-led document assembly capability, which can be self-service, as well as used as a means to review and check the content of 3rd party paper.

However, Kim is not expected to be used as a volume review tool. Right from its early origins its greatest strength is its ability to help a lawyer control their workflows and then gain useful operational and business data from that.