DoNotPay, the consumer rights and access to justice (A2J) platform, created by Joshua Browder, has expanded its accessibility to the web, as well as providing an Android version. Until recently the platform primarily had been available via the Apple App Store. The web version is already available, and the Android version is scheduled to go live by the end of this week.

The move will greatly expand the platform’s reach, which also recently launched in the UK. DoNotPay also has moved to a commercial footing, charging $3 per month, which is only payable once a customer has gained some benefit from using one of the many consumer capabilities available. The company also does not take a commission on any money gained for its users via its 50-plus applications.

The platform still offers its original capability of overturning parking tickets, and also has a strong focus on the small claims courts to get recompense from companies that lose your data and commit other misdemeanours. But, it’s also expanded into many other areas, such as helping you to get call-backs from companies that never answer the phone, to getting refunds on extra costs that companies add to bills without telling you.

Browder talked to Artificial Lawyer about the move and said that the expansion now builds on a further funding round earlier this year, which now totals $4.6 million of financial backing, as well having gained in the low 10,000s of active users per month. Some of the investors include, among others: Andreessen Horowitz, Greylock Partners and law firm Wilson Sonsini.

In short, what started off as an empassioned hobby for the once North London student, long since based in California, has become a real business with the potential to become a significant player in the consumer rights market. Moreover, DoNotPay, despite all the hundreds of headlines has only been going since around 2016 and only operating on a truly commercial level quite recently. Not a bad progression for about three years or so of hard work.

When asked about challenges from the market, such as accusations of unauthorised practice of law, as well as a sometimes easily breakable interface when it started, Browder said that the bugs have been ironed out now. He added that many of the lawyers accusing DoNotPay of infringing on their territory had also changed their tune, as they saw its work as primarily in the consumer and A2J space. And as noted above, one of America’s leading law firms, Wilson Sonsini, is an investor.

See below some screen shots from the web version. 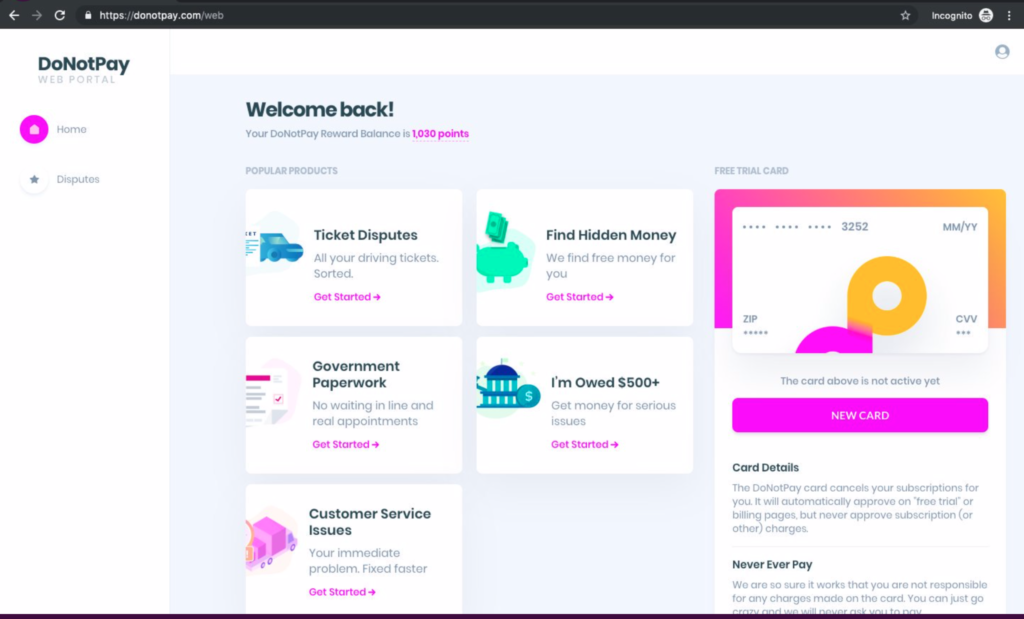 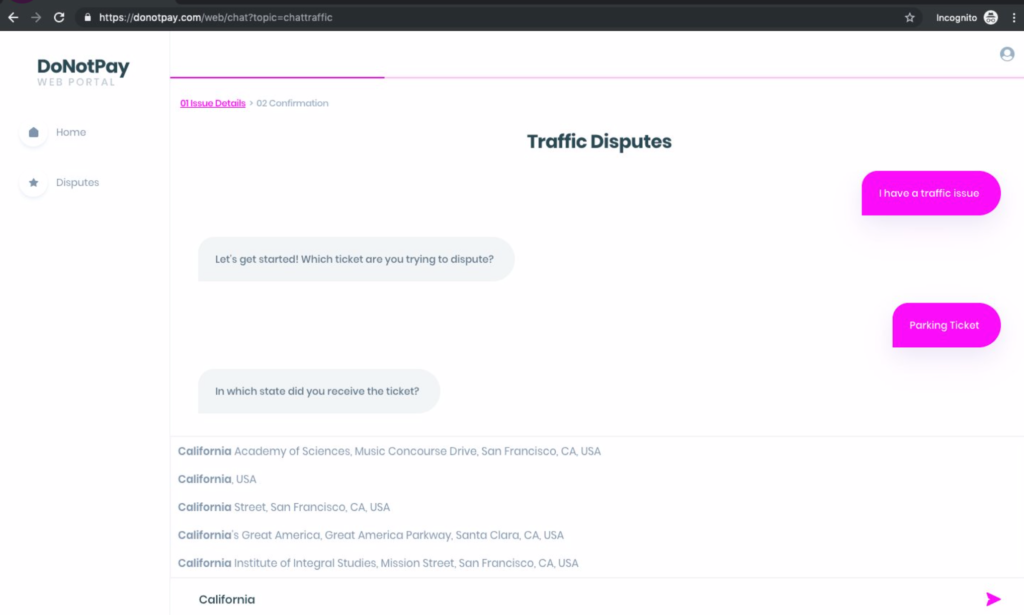 More broadly, Artificial Lawyer and Browder also discussed consumer rights and A2J, especially in the US.

On the California Bar’s efforts to shake things up and allow a more flexible legal market, Browder was not too optimistic: ‘The task force is positive, but I don’t think they [the Bar] will want to upset their members.’

As to the world of A2J organisations that have been in the market for many years, Browder was also sanguine.

‘Companies such as UpSolve for bankruptcy – I really admire them. But the older [A2J] ones? They should refocus. If after 20 years of having little impact maybe they should change their approach?’

Artificial Lawyer asked what this meant in terms of market evolution.

‘There are a lot of systemic problems,’ he stressed. He added that for DoNotPay the ‘law is a superpower for consumer rights’, and noted that ‘the small claims system is a nuclear weapon for consumers’.

In short, we should not expect the ‘owners’ of the legal world to solve the systemic problems we face, nor can we expect small, but well-meaning traditional A2J initiatives to have too much impact.

The way ahead is to seize all the levers of change that are available and really get as many people connected to them as possible – using digital platforms – so they can exercise their rights and make the law act for them, not just for big corporations. Scaling A2J means going digital. That’s the ultimate conclusion here.

But….what the platform can do is of course limited. DoNotPay cannot go to court for you and handle a contested divorce. It cannot manage a complex trial that involves many bundles of evidence and multiple warring parties. But, that was never the intention, nor in the US at least would it be allowed to as a business run by ‘non-lawyers’.

The goal is to put to work what is already there for all citizens, i.e. the law, but which is rarely used – perhaps much to the relief of some large corporates and financial institutions.

One might say that most of the consumer law needed to protect people is already there, it’s just that the majority of citizens do not know how to access it or how to then make use of it in a meaningful way. This is where Browder comes in – turning what is already there into something active and powerful, that works for the people who are at the other end of the consumer equation.

‘What we are is a digital advocate for consumers, and we are focused on the mass market,’ he concluded.

As far as Artificial Lawyer is concerned, this is the way to go. DoNotPay may never replace a good litigator in a highly complex matter, but as for the masses of smaller legal issues most lawyers would never touch – but that still matter to most people – this is where hope rests. And who knows where it may  lead?

One last thought – and it chimes with what this site has said before (and in its submission to the California Bar Task Force) – you don’t necessarily need radical new structures for businesses to change things. You just need people with the will and the imagination to leverage what is already possible.

P.S. there would be nothing stopping a group of regulated lawyers building a DoNotPay of their own on a national scale, or even global scale, which could also then do the restricted legal work Browder and team cannot offer. They haven’t because they can make plenty of $$$ working in the narrow fields they’ve always worked in. And perhaps that is the problem….Follow the money, as they say. It usually leads to the answer. Plus, many simply don’t think like Browder and cannot see in this massive A2J desert a huge opportunity for change.