In a previous Artificial Lawyer interview with the founders, Edward Taylor and Mladen Stific set out what Synergist does, which in short is to massively speed up the contracting process. It’s also designed to be used by non-lawyers, with lawyers perhaps setting red lines and deal terms first to allow others in a company to conduct contract negotiations and complete the deal. 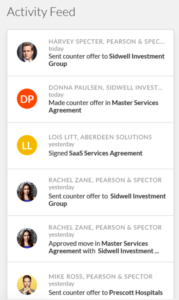 Naturally, this reduction in manual legal input is more designed for deals such as sales and procurement contracts, rather than complex M&A. But this should help free up inhouse lawyers to focus on using their talents for more complex matters.

Synergist explains that their system allows a person to customise a contract based on templates and invite the counterparty to then negotiate the terms via a collaborative interface hosted on the internet.

A bot also helps to represent the Synergist licensee in the contract negotiation, offering prompts and leading the way through the process to completion and signature.

The system can be pre-set by a company’s lawyers to only allow the user to operate within certain parameters that meet the inhouse playbook for contracts and/or that meet local regulations. The individual using the interface then sets up the parameters relevant to their contract and these are seen by the counter-party.

Co-founder, Taylor said of the new stage the company has reached: ‘Our company has been on a mission to help lawyers cut deal-cycle times in half and so far we’re seeing the best ROI in small teams who manage large volumes of recurring contracts.’

‘By automating the negotation, approval and signature of contracts you increase productivity and minimise time spent on administering contracts,’ he added.