Einstein once said that if you cannot explain something simply then you don’t really understand it well enough, and when it comes to conferences about innovation and the use of AI in the legal world then the old adage could not be more important.

So, it was with great excitement, plus a little trepidation, that Artificial Lawyer set off to Lexpo, the European legal tech and innovation event in Amsterdam, last week to engorge on a two-day smorgasbord of speeches and panel sessions.

However, there was no need to fear. Lexpo turned out to be the highlight of the legal tech calendar so far this year. ‘Why? What was special about this one?’ you may ask.

The answer is simple: some of the speakers really made you think anew and also to re-think your ideas. The most successful speakers did this by cutting through the hype and not talking up the complexity of their subjects, nor by meandering around the edges of ‘having something to say’, but instead really having something to say and saying it clearly.

There was a lot of talk about innovation at Lexpo. There always is at every tech conference. But, one speaker seemed to cut through the fog almost immediately: Marie Elisabeth Bernard, who is the Innovation Director at Dentons in Europe and also a Strategic Advisor at the global firm’s innovation platform, Nextlaw Labs.

I’m going to paraphrase things here and add some additional comments, rather than give you a verbatim account, but here are the key points of Bernard’s thesis on innovation in law firms, which can be called, as she did so herself: No Bullsh*t Innovation.

Then there were some great insights into the internal and political issues around innovation in a law firm. Again, Bernard did not waste time.

And this got Artificial Lawyer thinking that if the management team cannot or will not allocate sufficient fee earner time to testing and working with new technology then nothing much is going to happen. While it’s great that the IT team are able to ‘plug in’ the new legal AI due diligence system, if the associates who are going to use it and some of the partners who are going to oversee its use, cannot be cut some unbillable time to test this…..then, well….you know what happens.

This in turn means that one of the biggest barriers to small law firms adopting legal tech is not its cost, but the lack of human resources available to dedicate to non-fee earning activity such as pilots.

Even a 100-lawyer firm may not be that happy to let five or six associates not bill anything for a couple of weeks. Meanwhile the partners who oversee those junior lawyers will likely be nervous wrecks at the thought of how the lack of hours in their team will reflect on them when the remuneration committee comes to divvy up the profits at year end. So, that has to be addressed very carefully and management needs to be ready to permit and support this. In short, they need to envision the benefits of the investment. Again: prepare the ground.

As the session on innovation ended Artificial Lawyer was left with one encompassing thought: if every law firm in the world looked at the new wave of legal tech in this way, then the legal sector would transform itself in a matter of years. Here’s hoping…

The talk on legal AI by Dan Katz, who is an Associate Professor at the Chicago Kent College of Law and also Co-Founder & Chief Strategy Officer of legal AI company, LexPredict, was memorable for different reasons.

While Bernard cleared the cobwebs away with her direct approach to innovation, Katz’s inspiring and detailed talk was a real eye-opener with regard to the rapidly evolving world of legal AI, namely the split between ‘data-driven AI’ and ‘rules-based AI’.

To those who don’t spend too much time pondering the difference between chat bots and expert systems as compared to natural language processing (NLP) document review systems, such divisions may not seem that exciting. But, Artificial Lawyer has to say Katz laid bare a massive issue in the world of legal AI that needs to be talked about and, if possible, eventually addressed.

So, what on Earth is this division all about? What does it even mean: data-driven AI vs rules-based AI?

The short answer is that when AI research got started back in the 50s and 60s a lot of focus was on trying to model human patterns of thought and decision-making by creating computer programs. For example, if you studied how a person decided something then you could make a computer code model of this and then the ‘AI’ could take over and make those decisions. Hence, ‘rules-based systems’ that use logic gates, such as in its most basic form: ‘If X happens, then do Y’. 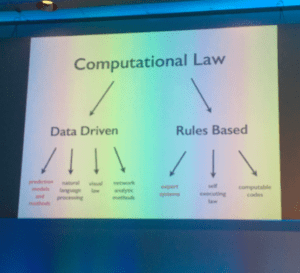 The problem was that to make sufficiently accurate models you need a lot of data to study the incredibly complex patterns that exist in the real world, especially when it comes to unstructured data, AKA human language, whether that be in the legal sphere or any other. (And it’s worth noting that in law, text is everything, so there was really no skipping the attainment of the ability of automated systems to accurately decipher meaning in text.)

This problem was made worse by very limited data storage capabilities at the dawn of AI research. Until very recently the ability to store, transmit and quickly process huge amounts of digital data was just too limited to be that useful. I.e. not enough data analysed >>> not sophisticated enough models >>> weak, narrow or inaccurate outcomes.

That led to disappointment and the ‘AI Winter’ when funds dried up for what looked like dead-end projects. AI really got back on its feet again as data processing speeds increased and storage costs plummeted, in part inspired by demand from the rise of the internet in the 1990s. The successes here were very much also data-driven, with a focus on seeking patterns in unstructured data, e.g. in search engines using natural language, or picture recognition software, rather than trying to create fixed, rules-based models ‘by hand’.

However, rules-based systems kept chugging along and have become what today people might call a chat bot, legal bot, or expert system. The problem is that even though the world of data processing has improved exponentially, the rules-based systems are still very limited. Meanwhile the data-driven systems are racing ahead, taking NLP and pattern recognition to new levels of sophistication.

In short, this fork in the evolution of AI has led to real disparities in effectiveness. And this needs to be addressed.

Or, to quote Katz: ‘Data-driven AI won the war versus rules-based AI.’

But, maybe the war is not over. The future may actually see a happy re-combination of data and rules systems to create the kind of AI systems that people would like to see. I.e. if you can use current data analysis systems and combine with far more informed and flexible, rules-based systems maybe we can create something that combines the strengths of both approaches.

Katz mentioned that chat bots may be the format that helps rules based systems to catch up with the more data-driven approach. This is because chat bots have a chance to interact with many users and collect data, which then can be analysed and teach the chat bot new levels of complexity so that its responses are not so wooden and one-dimensional, as is now the case.

Why does this matter? It matters because, as Katz pointed out, with so many headlines about ‘robot lawyers’, which implicitly suggest some kind of interactive, human-like sophistication that can be interrogated and provide precise answers to broad legal questions as if from a real lawyer, then there is going to be a lot of disappointment. Why? Because there is nothing even close to really doing the above in the legal field that’s using rules-based methods.

‘You can’t keep making promises about robot lawyers and not keep them,’ Katz stated. ‘[If this continues] we face another AI Winter.’

But, the key takeaway seems to be that there is a way forward, we just need to tone down expectations and get real about making best use of legal data. There are no short-cuts to creating the much talked about ‘robot lawyer’ and we ain’t there yet. But, let’s focus on getting there.

OK, this is about 2,000 words now and only two speakers have been covered and then only a few of their key points. So, the rest is going to be a summary of some of the sessions Artificial Lawyer attended at Lexpo.

And that’s all we’ve got time for. Apologies if I haven’t covered your input at Lexpo, there were many great speakers not mentioned above.

Finally, a really big thanks to Rob Ameerun who organised Lexpo 17 and made it the great event it was. We all look forward to Lexpo 18…. !

And, another big round of applause also goes to Matt Homann, of The Filament, for being an excellent chairman throughout the two-day event who made everything run smoothly and the panel sessions remain on track.