This is part of an ongoing series of Guest Posts on Artificial Lawyer about the way legal tech markets are changing around the world.

This time it’s a follow-up piece about Israel, a country with a lot of lawyers and a lot of tech entrepreneurs, but which as Ido Goldberg, head of the Tech&Law Israel platform at Robus Legal Marketing in Tel Aviv (pictured above) explains, is only now starting to embrace advanced forms of legal tech, with plenty of challenges and opportunities still ahead.

The piece also marks the holding of the second Israeli legal tech conference on June 27, 2017, which in itself is an important landmark in the development of the legal tech scene here.

Last November I wrote about the Israeli legal tech scene still being in its early days. One of the reasons for that, I argued, was the fact that Israeli lawyers were scared of being replaced by machines. In a conservative market such as the legal sector, most people want to maintain the status quo, I reckoned.

Well, just over six months have passed, and some things are definitely changing. What is now holding the Israeli legal market back is not low demand for technology, but rather low supply. Low supply of technology and innovation in the Startup Nation? Indeed. And here is why.

Israeli law firms are now prepared (or should I say, willing) to accept certain aspects of innovative technology in their offices. Over those last six months we’ve been road-showing legal tech to partners’ forums in Israel’s biggest law firms, which requested us to present them with the benefits of empowering their practice using technology.

In most cases, after presenting the various ways in which legal tech solutions are transforming the practice of law around the globe, we got the same response. It went something like: ‘OK, we’re convinced. Now tell us: what products do you recommend we buy?’

That’s not the only indicator signaling that demand for tech solutions is on the rise amongst law firms in Israel. Half a year ago we discussed the first ever legal tech event held by Israeli Tech&Law platform in September 2016, with an audience just short of 100 participants. 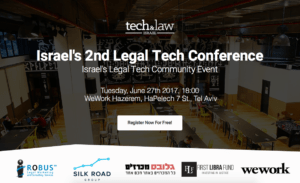 Now, the second Israeli legal tech conference is fast-approaching (June 27, 2017) and with a couple of weeks still left, the registration rate has already tripled itself, with a strong presence of techies and entrepreneurs. I think we can say with confidence – demand for legal tech products in the Israeli legal arena has never been higher.

Still, despite the rising demand for legal tech solutions, Israeli law firms are not using more tech than before. Why? As I said above, the main reason is low supply.

First, the vast majority of the well-known legal tech companies do not operate in Israel, nor do they target Israeli clients. There are several reasons for this – perhaps the chief one being that Israel’s legal market is a relatively small one.

Israel might be the first in the world in terms of lawyers-per-capita ratio, but in absolute numbers it still has less than half the number of lawyers in the UK, for instance. Language is also an obstacle; while the vast majority of products work in English, most Israeli lawyers work in Hebrew.

Another reason is that each law firm, on its own, does not have the ability to look for relevant products abroad, nor to reach out to companies and convince them to tweak their products in a way that they’ll fit the Israeli market. This takes too much effort and resources, which Israeli law firms are not keen on investing.

These law firms, though motivated to start using legal tech products, have no legal tech experience whatsoever. Combine that with the fact that they need to struggle to find the right products for them abroad, and you can get a good picture of why Israel, ‘The Startup Nation’, is not yet seeing a technological boost in its legal sector.

Fortunately, this is a difficulty that the Israeli legal market can definitely overcome. More and more lawyers and law firms are now realising that in order to be better at what they do, and in order to provide a better service to their clients, they should consider harnessing technology in their daily operations.

Among others, the Israeli Tech&Law platform is working on increasing supply of legal tech products in the Israeli legal market. We believe that a sophisticated legal market of more than 60,000 attorneys, many of them bilingual and licensed both in Israel and abroad, can surely be an opportunity for many legal tech startups around the world.

Optimism is the name of the game. There are indeed challenges, but as the basic rule of economics teaches us, supply ultimately catches up with demand.