We discussed Brown and Croft’s journey from fighting with unionised printers, to founding an early internet legal technology company, to founding LPO Integreon, to now fighting for efficiency in the legal world. We also looked at how Elevate was an early adopter of legal AI tech, which is now at the heart its business.

The Journey to Elevate

Brown begins the story back in 1989 when he first started working with Croft. Back then they were both in London, although Brown has been based in the US for the last two decades. At that time they worked in a company that produced documents for the London Stock Exchange, such as IPO prospectuses.

Even as recently as the late 1980s, the typesetting process was still incredibly laborious. As Brown says, it wasn’t quite the block printing of medieval times, but was not that far off. Another problem was that it was a heavily unionised sector and when work on an IPO or merger document needed to be performed urgently or over a weekend, the printers would either down tools or demand as much as four times their normal hourly rate.

It was an incredibly manual and overly expensive system, as well as very inefficient. Artificial Lawyer noted that this is rather interesting, given that Elevate is now working at the heart of the legal sector, which to some extent suffers from exactly the same problems as the 1980s printers.

The point is not lost on Brown either. In a way, he has spent his entire professional life combatting inefficiency and structural barriers to process improvement.

Brown says that the next step was to start using some of the early Macs for desktop editing and production to escape the limitations of the old system. But, with this digitisation came the realisation that they didn’t need to do all the work in costly London, an insight that would later connect with the world of LPOs.

‘We saw we could do this work all over the world, just at the same time as the legal market was globalising,’ Brown says.

To some extent those initial insights have held good for the intervening couple of decades. Brown went through several other ventures. He moved to the US, was founder of a (now common, but then almost unheard of) Silicon Valley venture-backed legal tech company, one of the first virtual data rooms for M&A in the mid-1990s, which he sold in 2000.

Then he started Integreon, best known today as an LPO, although in 2001 its initial focus was on providing research to investment bankers and management consultants at McKinsey and others.

Brown says that the idea behind Integreon came from how he saw doctors and nurses divide labour at his medical school when he was a young doctor in training. In this analogy the LPO represents the nurses who take clinical history and perform initial physical examination; and the senior in-house and law firm lawyers represent the physicians who test, perform clinical reasoning and diagnosis, and treat patients.

‘Then, by 2006/7 Clifford Chance had started to work with us and that was the beginning of our relationship with law firms,’ he explains, then adds that even back then they did not make a lot of noise about it.

The company grew fast, so did its number of legal sector clients. But in 2011 Brown says he was pushed out of after its institutional investors decided to change strategy.

Now independent again, but with a big lump of capital, Brown had a new idea for a business. After many years’ hard work some entrepreneurs may have just retired to Tuscany. But Brown was not giving up and wanted to attack the problem of inefficiency in the legal world once more. And so Elevate was created.

‘We decided to use what we had learnt building businesses with other people’s money. So at Elevate we have no institutional investors and we’ve used a lot of tech from day one,’ he says proudly. ‘We chose the name Elevate, because it reflects our desire to elevate the way lawyers deliver their work.’

He also adds that the name was a subtle dig at the somewhat acrimonious parting of ways with the Integreon investors. ‘I wanted to rise above that as well,’ Brown notes wryly.

Brown explains that they were able to assemble a very experienced team of like-minded entrepreneurs and set off with the strategy of building a vertically-focused ‘legal integrator’ of technology, consulting and lawyers.

Elevate embraced design thinking for legal work, offering consulting on how best to use data and customer experience to improve processes. They used tech, including experimenting with the then nascent legal AI systems. They built a global platform of secure service centres of lawyers in the US, UK, India and Philippines to perform legal services. They also launched a contract lawyer offering to compete with the likes of Axiom.

The company was designed from day one to ‘operate globally, efficiently, use technology, perform sophisticated legal services and steadily move up the value chain’.

One might say that if you were going to create a legal services business from scratch today then one might design one that looked a lot like this.

Brown notes that Elevate explored the use of legal AI company Kira Systems due diligence platform back in 2013, which in legal AI terms is almost ancient history and before Kira was well known.

They also experimented and worked extensively with other AI technologies, such as KMStandards for contract analysis and Seal for contract discovery. They still work with Kira and many other third party AI platforms. And they have been quietly building AI into their own enterprise legal technology platform, known as Cael, which offers modules for contract management, M&A due diligence, project management and billing compliance.

Brown adds that Elevate’s approach is people augmented by tech, noting they now routinely use AI ‘at the heart of our service’. This focus on testing and implementing AI has been part of its broader initiative called ME2, which stands for Machines and Expertise Everywhere.

This technology is now being used across a range of cases, from helping corporate legal departments to surface insights in their contracts, to creating dashboards that present GCs with key KPIs, to helping companies to build and monitor predictive budgets for complex legal matters.

Brown notes they have never wanted to just ‘take Big Law lawyers and then offer them to legal departments at a cheaper price’, or just to be a traditional LPO. The aim was to create a fundamentally different offering that integrated legal expertise and a new type of legal service delivery. It was, one could say, the idea first, then building what was needed to make that idea a reality.

And it seems to be going well. They now employ over 500 people around the world with revenues approaching $40m. They have around 50 Fortune Global 1000 companies and a number of law firms as clients. 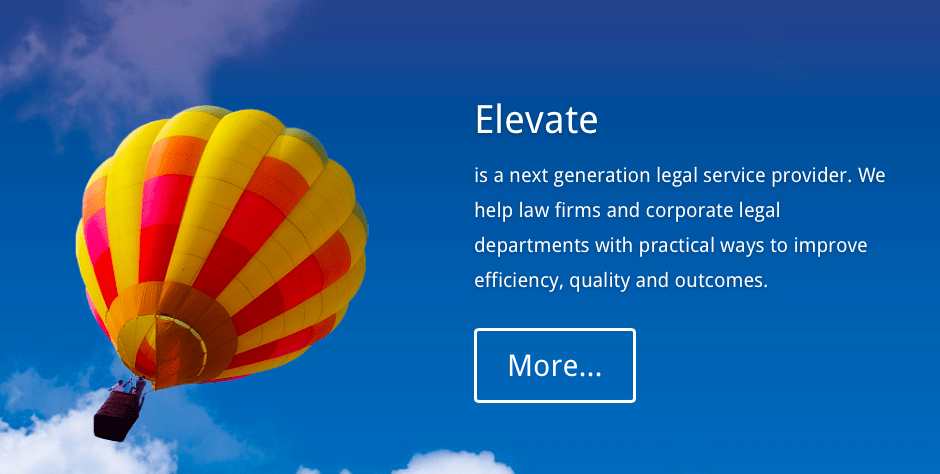 Not that everything is easy. And in a reflection of where Brown and Croft first started working together, when they were fighting print unions in the 1980s, they acknowledge the legal sector still has some tough systemic barriers to overcome.

‘We all know law firms are struggling with an entrenched business model. The billable hour reinforces inefficiency, but we are confident that over time this will change,’ Croft and Brown say.

‘We remember when a union typesetter was also paid by the hour, four times his hourly rate if the work somehow spilled over into the weekend. While highly skilled typographers still exist, there are far fewer of them. Today, most document production is performed ‘in-house’ so to speak, much more cost-effectively and efficiently, by non-artisans, using easy-to-use technology’, Croft notes.

And that seems a fitting point to end our interview. Elevate and its energetic co-founders, Brown and Croft, are betting that while less has changed over the last ten years than some had predicted, a whole lot more will change over the next ten years than most can imagine. They believe that, in many ways, change in the legal sector is just getting started.

Artificial Lawyer’s written content is Copyright (c), unless otherwise stated that it has been produced by another party. Do not reuse, repost, or otherwise host Artificial Lawyer articles on other sites. Naturally I am very happy for you to link to articles, retweet etc.