In short, the eponymous Legal Sifter application allows the user to upload a proposed contract on another party’s paper and analyse it with natural language processing (NLP) in a few seconds. It points out anomalies or missing clauses and also, perhaps most importantly, provides detailed help to the user on a point by point basis throughout the contract.

That help exists in two forms: the additional information on each aspect of the agreement that Legal Sifter has built in; and the extra knowledge that a client, whether a law firm or a corporate inhouse team, has added. That tailored client input could be crystalised know-how of an experienced lawyer about contract terms, or special recommendations as to certain terms and playbook rules that inhouse lawyers want to include.

Users can also accept or reject certain terms at a click and quickly add and send back amendments.

In this way the application could be used by external or corporate inhouse lawyers, as well as non-lawyers who must frequently review contracts on other parties’ paper with in most cases little legal knowledge or support. This is especially the case for mid-size companies and investment funds, which may not have a large legal team, but nevertheless are dealing with contract negotiations on a daily basis.

Private equity funds were given as a key example of a client that Legal Sifter would serve. They have lots of contractual negotiations, but often only a small legal team that equally doesn’t always want to outsource a relatively straightforward negotiation to an external law firm that will charge a significant amount in fees. Legal Sifter fills that demand gap.

Likewise, the application can be used by law firms that must undertake contract negotiation work where speed and cost are key factors, allowing the lawyers there to deliver their service faster and still protect their margins.

At present the application is focused on NDAs in the US, but the company plans to roll this out into other types of contract.

Kevin Miller, CEO of the Pittsburgh-based legal tech company, points out: ‘Every negotiation in the world involves one party working on another party’s paper. You need to digest what is there, review it and then react to it.’

And it is here were Sifter creates value, Miller explains. Using industrial analogies, Miller notes that the biggest problem negotiation faces is ‘the queuing’ experienced when legal questions are sitting on a person’s desk and not being addressed. ‘It’s like a manufacturing problem,’ he says, where an assembly line cannot move the product forward because it’s stuck at a particular stage.

‘The problem with contract negotiation is that it’s pull, not push,’ he notes, i.e. each stage is completed and then the negotiation is pulled forward to the next stage and so on. Any pause stops the movement and production grinds to a halt.

The aim of Sifter is to drive the negotiation forward by quickly spotting risks and queries, and integrating useful advice and guidelines on how to ‘OK’ each key clause of the agreement, then move forward. This way a lawyer, or non-lawyer, can move rapidly through the document, in this case at the moment, NDAs.

Miller gives the example of a very experienced lawyer who has used the new system. He is sent many NDAs by his clients, to check, review and amend, then send back. The lawyer said it normally took around 30 minutes to adequately check and respond to an NDA document that was in negotiation. With Sifter he was able to halve that time to around 15 minutes.

Is a 50% reduction in time significant? Well, if a lawyer was working on NDAs all day, as some do who are in inhouse legal positions, then the answer is: yes, for sure. That is in effect a doubling in productivity. For external lawyers who perhaps may bill on a fixed fee, this also allows protection of margins, or even an increase.

Fundamentally, Miller says, the company wants to see Sifter’s use spread through the market while helping law firms, not working against them. To help in this the company encourages law firms to become ‘re-sellers’ of Sifter to their own clients, scooping up work that might otherwise go inhouse.

As Miller notes, the legal market is growing, but more work is going inhouse. The message therefore is clear: Sifter is there as an AI tool that can help law firms (and several are already signing up he notes, including at least one very large Global 50 law firm), but if in the long term, the decision is made to ignore the use of AI, then the corporate and financial clients will take this up and run with it on their own.

Or, to quote their mission statement: ‘[Our aim is] to bring affordable legal services to the world by empowering people with artificial intelligence. We will achieve our mission by working with the legal profession, not against it.’

One question Artificial Lawyer asks is whether this is similar to some of the contracting automation tools (CATs) on the market? Miller says, no. The key here is that Sifter works with anyone’s paper, there is no fixed format, no template or pre-built negotiating space that a contract must be formed in. Sifter will take any document, once uploaded then engage its NLP and get to work on what is there. 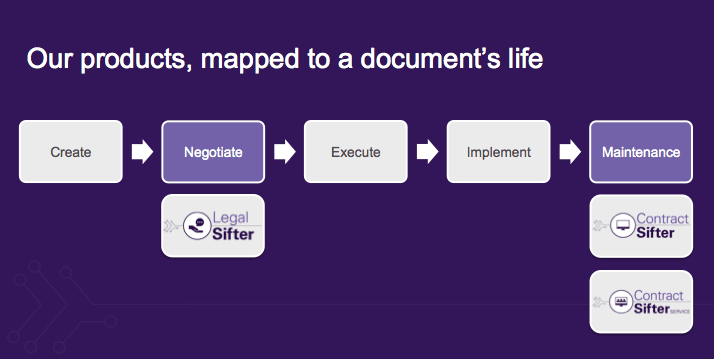 Miller also points out that although Legal Sifter is a company name that some readers may recognise already, the current incarnation is new.

The company first launched out of a Carnegie Mellon University programme and has been venture-backed since June 2013. It also received $2.3m in seed funding in 2016. Also in 2016 they launched ContractSifter, which is an NLP/machine learning doc review system, and then, just this summer the new Legal Sifter AI-driven contract negotiation product was launched.

But, regardless of how the company got to this point, the key takeaway is that NLP and machine learning can be used at many stages of a contract’s lifecycle, not just in post-completion doc review. There is value to be delivered at every stage in a document’s lifecycle and LegalSifter is determined to use AI to support more than the maintenance stage.