In an interesting survey of 2,000 UK office workers, tech company WorkFront found that people are far more open to partial automation of their jobs and the use of AI than one might expect.

This also matters in the legal world, as beyond the roles of lawyers, most law firms employ around as many support staff across a wide variety of roles, whose work will also be impacted by automation and deployment of AI driven software.

While much of the attention on legal AI developments has been on the billable work of lawyers, the total work output by a law firm that could be partially automated is significant, from BD, PSL, payroll, accounts to secretarial and admin roles, there are dozens of lines of work in a law firm that may be open to huge increases in efficiency and productivity due to AI tools and automation.

Fundamentally, the report which looked at office workers in general, rather than just legal industry staff, found that today’s workforce welcomed the use of automation – up to a point.

For example, in the chart below, 72% of workers said that AI and automation ‘will give me more time to do my primary job‘; 82% said ‘I’m excited to learn new things as the workforce moves toward more automation’ – i.e. I’ll get to learn new skills for new roles as more process work is taken over by software; and, 84% said that ‘the use of automation will let us think of work in new and innovative ways‘, i.e. if software can do the drudge work I can then spend time focused on more new and higher value tasks. 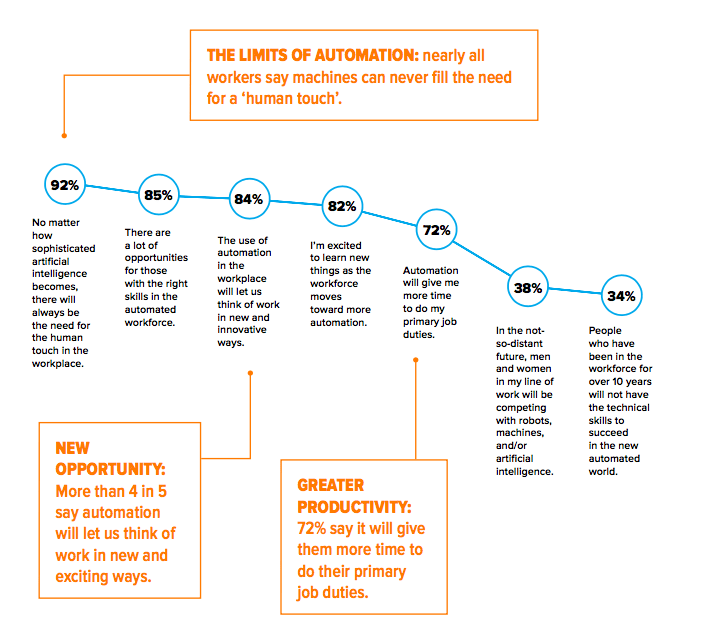 The report authors added: ‘While many are wary of the impending encroachment of automation into the workplace, knowledge workers seem to be diving in head first, citing the added productivity and innovation that could result from it. Even these automation enthusiasts, however, see limits to the presence of automation in work management.’

‘Contrary to much of the fear-mongering around the topic of work automation, 84% of knowledge workers see it as a chance to rethink work in new and exciting ways. Seventy-two per cent believe work automation will give them back time to perform their primary job duties better. The only hesitation that exists seems to lie in how much of the work will ultimately be done by machines and how much will still require the human touch,’ they concluded.

The survey also found that workers appear more than happy to point out where parts of their current job can be automated and are also well aware of what is already partly automated (see table below). 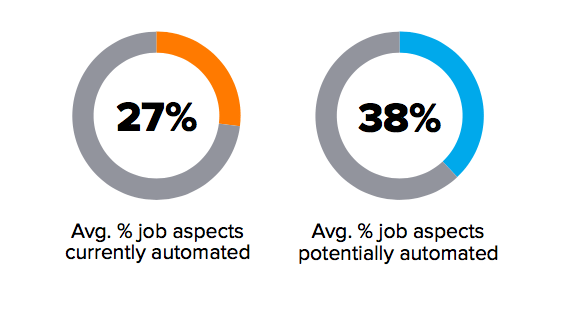 In this example, the surveyed workers saw what today is about a quarter of their work being automated moving to 38% in the near future. Yet, as noted above, this didn’t appear to create negative responses as to its effects on their working lives.

Perhaps the most intriguing finding overall is that people who are truly on the frontline in terms of seeing automation and potentially the use of AI systems eating into the tasks they do now are highly optimistic about the future (see table below). 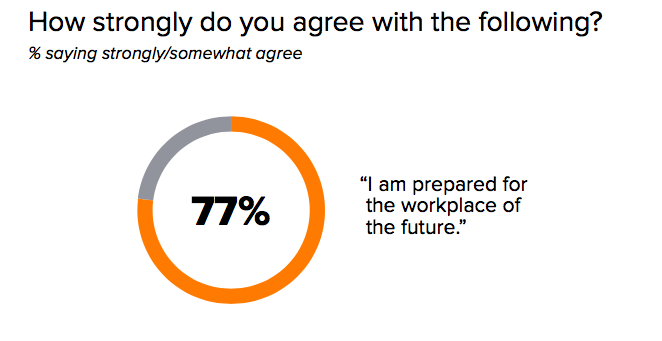 Maybe they are naive? Maybe once automation gets to a certain level the sunny uplands of creative and fulfilling jobs won’t appear – they’ll just be out of a job? We don’t know right now, but the broader workforce, at least in the UK, doesn’t seem to be as scared as the general media would suggest they are of AI et al.

One other factor here is that we all have some elements of process work in our jobs. Few people enjoy that type of work, hence perhaps this is simply human nature responding to the hope of removing tedium from our daily lives? We’ll see how things turn out.

To conclude, while not a legally-focused report, it’s still fascinating, as paralegals and junior lawyers are not the only ones in the legal world facing the forces of the industrialisation of cognition, which is growing everyday.