An Exclusive by Artificial Lawyer

For a while now people have been talking about a legal AI company called Eigen Technologies, which is known to work with Linklaters. But, despite the interest, the company has remained mostly silent on its clients, its work and its AI capabilities.

Some have described it as something of a ‘dark horse’, busy in the shadows of the City and Wall Street, but with few ever getting a chance to see the system at work.

Now, its co-founder and CEO, Dr. Lewis Z. Liu, has invited Artificial Lawyer in to the company’s Covent Garden HQ in London to hear the start-up story of Eigen and to see a live demonstration of its considerable capabilities.

Liu starts by saying that his voyage into the world of AI first began back when he was eight years old. He had wanted a Nintendo, but instead his father had returned home one day with a computer and some coding guides.

He said to his son: ‘If you want to play computer games then you can write them yourself.’ And so, the journey began.

Liu has since blazed an impressive path through academia and the financial world, and now into the realm of AI. He was the first student at Harvard to do a double major in both physics and fine art. He’s also got a PhD from Oxford in Atomic and Laser Physics, where he was the lead inventor of a new class of x-ray laser, as you do.

If that’s not enough Liu previously founded and led the Quantitative Finance & Strategies division of Aleron Partners LLP, a boutique private equity advisory firm where he advised on transactions involving high commodities risk. And to top it off, he even started his career as a consultant at McKinsey & Company in London.

But, that’s just the prologue. The story really began when he got appointed by global law firm Linklaters to become a senior strategic advisor, where he first successfully helped Linklaters predict which banks would fail the European Central Bank stress tests. Off the success of that, Liu co-founded the Tactical Opportunities team, an elite deal origination and advisory unit staffed with ex-investment bankers, lawyers and consultants.

It may seem odd for a law firm to hire a non-lawyer in this way, but the reality is that some of the most esoteric financial instruments, e.g. the complex derivatives and debt products that triggered the financial crash of 2008/9, are so arcane they need additional expertise to figure out what they really mean to the institutions that may have bought or created them.

Which brings us to a key moment in Liu’s life and the origins of Eigen. We have to step backward to when Liu worked as a management consultant on a project at a major bank, during the financial crisis.

‘We were looking at the underlying financial agreements made by the bank,’ explains Liu, as part of a project to help the bank to better understand its balance sheet.

But, there was a problem: the contracts were a bit of a mess, crazily complex and vast in number.

In short, the bank didn’t really know its own financial position because going through all of its contracts to find out who owed what to whom was just too complex, especially when one added in financial instruments such collateralized debt obligations and other types of derivatives.

‘I was shocked,’ says Liu. From his viewpoint this was something of an existential crisis for a bank to be in. How could a business whose job is to manage money not know how much money it had or owed? ‘That left a deep impression,’ says Liu.

And if a bank doesn’t understand its own contracts, or cannot understand them because reading them and extracting all the vital positions manually is too hard or expensive to do, then that’s a life or death problem for a business like this.

Banks could of course hire in floors of lawyers with special expertise in these types of contract to read and connect the dots across thousands of pages of financial text turgid enough to stop most people’s brains dead in their tracks after a couple of minutes.

But doing this would be prohibitively expensive and very slow, not to mention likely to produce interpretation errors due to the complexity of the data and scale of the task.

Or, to put it another way, as Liu bluntly says: ‘Banks couldn’t reconcile their balance sheets because it was too expensive to do so.’

If only there was a better way of doing things…

The Birth of Eigen

Now we scroll forward to the near present. While working at Linklaters, helping lawyers with many issues related to the complexity of the market, Liu decided that creating an AI system that could exploit natural language processing (NLP) and machine learning would be a great solution to the problems of Linklaters’ clients. 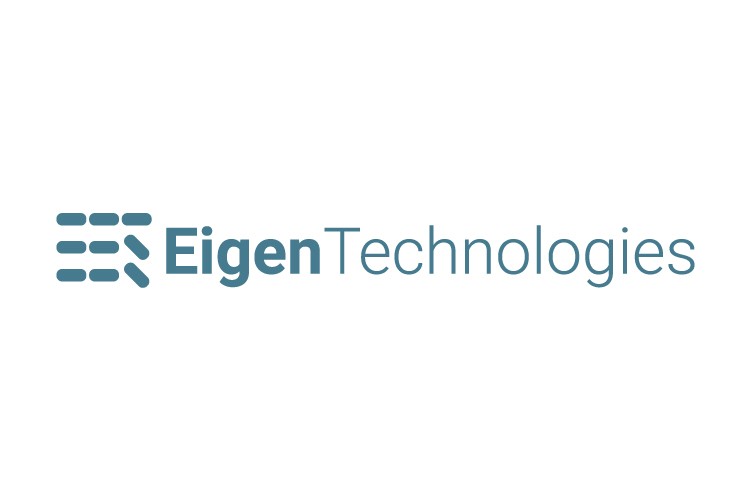 So, in 2014, Liu along with co-founder and Chairman Jonathan Feuer, a managing partner at CVC Capital Partners, got together to create Eigen Technologies, with Feuer providing the capital. Several iterations and many hires of top mathematicians, physicists and machine learning experts later, they were ready to put their AI system to work.

Perhaps not surprisingly, Linklaters was Eigen’s first client, back in 2015, which certainly helped get them going. Liu also points out that they have not taken outside investment.

‘We generated revenue from the start. We’ve bootstrapped ourselves to where we are now,’ he notes.

He also stresses that the company is very research led and how has a team of around 50 people, with an additional office in New York and a deployment in Singapore. When they get paid, a big chunk of that money goes back into more hires and more R&D to further improve their NLP, which leads us to the next key point: speed.

Liu is confident that Eigen has one of the fastest systems in the market.

‘We have done a number of benchmarked tests now with clients against other AI companies where the client produced a USB stick of data which we all had to work with. In each case we were faster than the others in training the system.’

Artificial Lawyer saw several very impressive demos of the AI system at Eigen’s offices, one of which needed just six contracts to get its NLP up to speed in analysing and extracting data on a particular set of documents.

However, these were not witnessed under ‘lab conditions’, nor was there an official control test against other AI companies. Nor, it should be pointed out, have we yet seen a public and open ‘speed learning test’ of Eigen versus other companies in front of a general audience.

Until the leading legal AI companies come together for an independently judged public ‘bake off’ then the wider market cannot know for sure. That said, Liu is 100% certain of his AI’s capabilities.

A second interesting aspect is the integrated addition of rules-based sorting, as well as the ability to ask natural language questions of Eigen as it tears into the contract data.

Artificial Lawyer was shown demos where natural language questions were typed in, trained live in a couple of minutes, and the system responded by analysing the document stack and then providing answers based on the question, primarily with true/false responses.

Questions can include: ‘Does this loan fit our purchase criteria, (e.g. English governing law and transferable to a hedge fund or under default)?’ Questions such as these have been used by Eigen when it served a hedge fund to purchase a portfolio of non-performing loans.

This was a nice extra touch, as one could imagine a lawyer wanting to interrogate the data in this way, i.e. via natural language questions, much as legal AI research system ROSS Intelligence is able to provide answers to normal text questions.

And perhaps this interrogation aspect is a key characteristic of how Eigen approaches the subject of AI review. I.e. this is not necessarily all about event-driven, transactional review, such as due diligence in M&A, but rather about allowing a company, law firm, or bank, to gain visibility of its data core, or contract stack, to read its own DNA, one might say.

Liu adds that they are not using neural networks to do this and the focus instead is on investment in newer methods of machine learning, backed by his growing team of maths and science PhDs. He adds that Eigen also has a suite of APIs already developed, which allows it to link to a wide range of other software and platforms law firms or banks may already be using.

The system has also been successfully trialled with a range of other languages, including, Mandarin Chinese, Dutch, Spanish and German. Though, apparently Japanese with its mix of kanji ideograms, plus katakana and hiragana phonetic signs is proving to be a challenge.

First, Eigen is coming out of the shadows after three years. The company now works with a number of different clients across the legal, financial services and consulting sectors. This is because Eigen is looking to serve the wider legal and financial services market.

At present they have around 30 clients across different sectors, including major banks. One job recently involved an analysis of a bank’s entire portfolio of financial contracts for a regulatory submission. This included around half a million documents, generating around 7 million data points.

Liu notes that they have a variable fee structure, with volume of document data, or number of data points wanted, having an impact. They’re also able to conduct the work on their own cloud servers, or inside a firm or bank, including running the AI analysis over completely air-gapped, on-site computer systems to provide maximum security.

Fundamentally, Liu wants Eigen to appeal to the C-suite of execs in financial service businesses and their top lawyers, who want to know the answers to key questions, such as: ‘What is the risk exposure of all these OTC derivatives? What are we really legally liable for according to this vast mass of futures contracts?’

Going back to the earlier formative experiences as a management consultant, Liu points out that if you went to the CEO of a major company and asked them how the business appeared to be doing in broad financial terms, or stock market value, they’d be able to give you a good answer.

But, if you went to the Chief Risk Officer or General Counsel and asked what risks and potential liabilities all of their contracts may expose them to in total, they couldn’t tell you and that is a problem that AI can solve.

And perhaps that is the best way to think of Eigen and where it sees an AI market opportunity, becoming the ultimate risk analysis tool in high value financial matters. Though, Eigen will have plenty of competition from established names in the legal AI market.

What happens next remains to be seen, but the legal AI market is not yet sewn up and Eigen has everything to play for. Let the battle commence.