Artificial Lawyer recently caught up with two leading lights in client-first legal tech at UK-based insurance law firm, Kennedys: Karim Derrick, Head of Research and Development, and Richard West, a partner who heads the Liability Division and is a member of the firm’s Strategy Board. Both are working hard at delivering legal innovation for the firm’s clients and tapping the ‘New Wave’ of legal technology.

The first thing that Artificial Lawyer notes is the fact that here we have a lawyer who sees the value of tech to the delivery of legal services to clients, and a tech expert who sees how machine learning and data analysis can be used within the legal world.

Both took different journeys to get to this point. West some time ago, as far back as 2009, had developed an interest in data analysis and automation for insurance clients.

‘The inspiration came around nine years ago when Richard Susskind came to a partner meeting,’ says West. Not every partner was overjoyed at the message, but West saw something.

‘We were handling volume personal injury (PI) matters, but we didn’t want to compete purely on price,’ he explains.

The answer was to look to technology to make a difference. The firm also came up with a new tagline that related to better use of technology: ‘Only use a lawyer when you need to.’ Or perhaps another way of putting it would be: ‘Use a law firm, but let that work be automated where possible.’

For Derrick, who only joined the firm in 2017, the journey has been less direct. Derrick had previously worked in education and had applied his technical skills to solving the problem of marking students’ work without having to rely on multiple choice systems. The answer was Natural Language Processing (NLP) tech, which could read students’ papers and help give a score.

The parallels with the legal world were significant.

‘The problem was that you can’t scale excellent teachers,’ Derrick explains, i.e. a regular teacher is a professional with knowledge of their subject, but their capacity as an individual to respond to student needs and marking requirements could only be stretched so far. Society can’t afford enough excellent teachers to meet demand.

‘So in assessment they instead used multiple choice tests. It was a short-cut, a quick win,’ he notes, but which as some educational experts suggest is not the best way to measure performance, compromising validty with reliability.

Derrick later expands on this. One might say that this situation is a little like where we are with lawyers today.

We have legal experts in a field whose knowledge cannot easily be scaled. Instead we have used lower-paid paralegals to do very narrow legal tasks at scale, but this is not a perfect solution either.

Hence, why the new range of NLP and machine learning tools on the market and those being developed by Kennedys internally are of such importance.

West notes that the tools they’ve developed already, such as new iterations of their Klaim insurance defence tool, have seen significant use by the clients, which in turn has produced plenty of useful data. And that data can then be used to help the clients further and inform new versions of the product.

Understandably the firm doesn’t want to tell all of its rivals exactly what kinds of tools it’s created and which data insights it’s most focused upon.

But, they will set out one part of the platform, which revolves around Acknowledgment of Service forms (AOS). The defendant – in this case an insurance company – has to file such forms. Kennedys’ Klaim system ensures that the key information is filled into digitally hosted templates, which is one of the key ways that valuable data is collected.

This is just one aspect of a much larger platform, that we’re going to have to wait see more of. But, we can say that Kennedys would not have hired Derrick if they weren’t serious about developing the platform to help clients in other ways.

For example, the firm is teaming up with the University of Manchester to develop next-generation fraud prevention software for its clients using machine learning systems. They have also formed a partnership in India with Cognitive Computing Services, which is focused on rapid prototyping of text analytics and machine learning applications.

West adds that after the success in the UK, they’re looking at expanding the same insurance defence platform to the US, adapted to work in all 50 States. And, it’s worth mentioning that Kennedys has six offices in the US already. There is also a V.4 version of Klaim, which is yet to launch.

And this ability to keep developing new iterations is very much to do with having a Head of R&D in the shape of Derrick.

As West notes, although the firm is global in coverage, it’s not a Magic Circle mega-firm in terms of having millions of pounds to test and explore new ideas. They have to really make any R&D investment have an impact.

‘The key focus is on products for clients, it’s not about efficiency gains for us,’ says West.

Derrick picks this up and pointedly says of legal tech innovation: ‘One thing that I’ve seen is that so much activity has an internal focus, so little is client focused.’

The whole process is also a virtuous circle, both Derrick and West explain. The tools help the clients, their use of the tools produces more data, and that supports new insights and innovation that again helps the clients.

It also no doubt helps to form a lasting bond between law firm and client, and that certainly helps the lawyers. So, it’s one of life’s win-wins, although it’s fair to say competitor firms that don’t do the same will likely lose out in the future.

Derrick then talks about how whatever Kennedys is doing now is part of a bigger picture of change in the legal world. He notes, by way of example, that the UK’s Ministry of Justice is working on building the long awaited online courts system, which is another sign of how things are shifting. 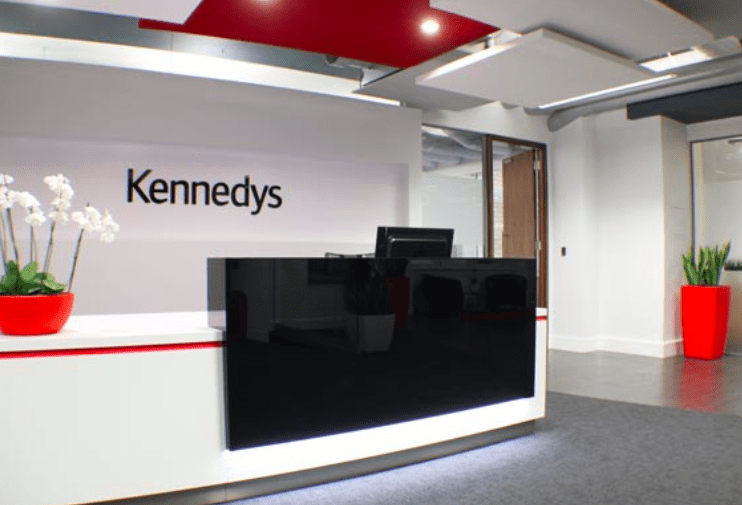 And of this bigger picture of legal technology, what does all of this mean in terms of the future of Kennedys? Their view is that Kennedys will keep growing in terms of revenue, but whether the number of people in the firm will grow as fast is not certain.

West has to leave for a partner meeting, so Derrick and Artificial Lawyer return to the parallels of law and education.

‘Both lawyers and teachers believe what they do is a craft,’ Derrick notes.

He then draws a little graph to explain the reality. It’s a curve that is almost exponential at one end, but the majority of the line is a long, flat tail, with the vertical axis showing complexity and added value.

What does the graph mean? Only a small part of what is demanded of lawyers, or a teacher, is of sufficient complexity to justify expensive professionals, but there remains a long tail of activity that is essential, but of low value. As things stand society can’t afford enough quality lawyers to go around.

And the answer? Automation. And perhaps that’s a great place to leave things.