Joshua Browder’s pioneering legal bot platform, DoNotPay, has launched the first ever fully automated consumer service to reduce the price of your flight after you have booked.

Browder, from North London, and currently a student at Stanford University in California, has seen his legal bot evolve rapidly since it launched with an initial focus on revoking parking tickets. He has since developed applications to provide legal support for refugees and to help victims of the Equifax data hack to make financial claims in the US courts.

This latest application utilises legal terms in airline tickets that allows people automatically to get a reduction in price when cheaper tickets are available.

The consumer rights system can extract the terms of your ticket to find a clause that allows you to be rebooked at a cheaper price. For example, the ’24 hour rule’, weather warnings/departure time changes, already refundable tickets, airline compliance with price gouging laws and cancellations.

Browder explained to Artificial Lawyer the background to the new application – and the key message is this: people want fully automated legal and consumer rights processes.

‘Over the past three years, I have seen what works and what doesn’t. I was amazed that people were actually winning (both in their judgements and appeal) thousands of dollars from Equifax, despite all the ‘experts’ that said otherwise,’ he said.

‘However, I realised that even asking a user to print out a document and go to court is too much. For true ‘access to justice’, it has to be automated from start to finish. In making this product, I aimed to live up to the promises of a true ‘Robot lawyer’ (though I know it’s a controversial term). Once set up, it protects a user automatically and a person doesn’t have to do anything: the money just gets paid straight to their bank,’ he added. 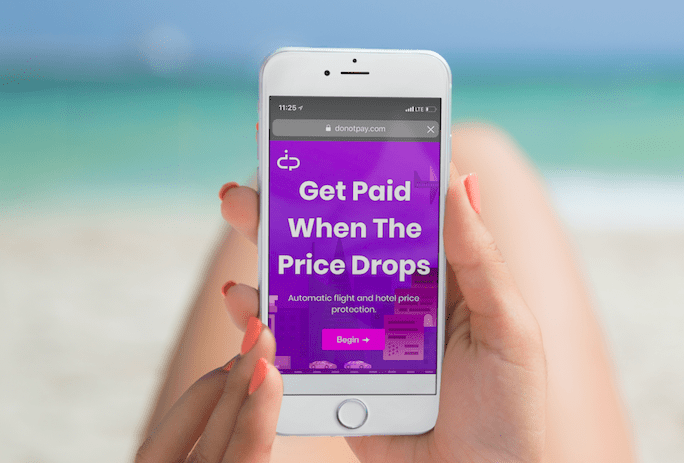 He went on to say that the product works with all US airlines and travel booking websites, and once set up in around 30 seconds, it will lead to people automatically earning money whenever they fly.

The core logic behind the application is that flight and hotel prices change all the time, he explained.

‘Retail price protection has existed for a while, but never for travel. Our product forces airlines to pay people whenever the price of their ticket drops,’ Browder concluded.

For example, if someone booked a $380 flight from New York to San Francisco on United Airlines and the price drops to $120, they are automatically paid $260 by the airline.

To achieve this, the DoNotPay app finds all the travel confirmations in your email and checks for a cheaper price for the same type of ticket 17,000 a day (every five seconds) until your flight departs.

It will then switch you to the cheaper ticket and the airline has to refund the difference straight back to your original form of payment. DoNotPay will repeat this process an unlimited amount of times until you are paying the lowest price that was ever offered for your fare class.

The product is completely free and people keep 100% of what they save. It can be found here.