Legal AI research company, CaseMine, has launched a beta version of a new English case law analysis system powered by natural language processing (NLP) and is pioneering a capability that has largely been untapped by machine learning systems in the UK.

Perhaps surprisingly, although the US has now a growing number of AI-driven case law research systems, ranging from RAVEL and LexMachina, which are owned by LexisNexis, to start-ups such as Gavelytics in California and fast-growing AI research companies such as Casetext and ROSS, in the UK the same level of AI company activity focused on research has not been seen.

Some experts have suggested the lack of NLP/machine learning-driven research systems in English law (as opposed to more standard keyword-driven systems) is in part due to issues related to Crown Copyright and court case data, i.e. in that IP rules might prevent private companies making commercial use of this data for productising. 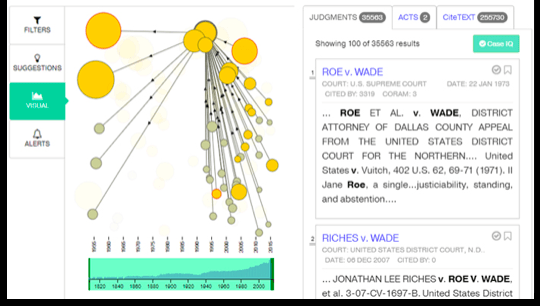 One of its key capabilities is to find all related cases to aspects of a matter that a lawyer may be researching, working at a higher contextual level than keyword relatedness.

Artificial Lawyer caught up with the company’s founder, Aniruddha Yadav, to hear some more.

‘According to the legal advice we got, although judgments may be subject to Crown Copyright (which in itself is not certain), they are licensed for use under the open government licence. Thus, they can be re-used free of charge and without requiring prior clearance provided the source is acknowledged,’ he added, which is great to know.

Explaining how the system works and what it will offer to English lawyers, Yadav said: ‘The data we have was collected from a variety of sources, mostly sourced from public resources like court websites. The raw data was further cleansed, annotated and inter-linked algorithmically.’

They have analyzed around 200,000 UK cases. The courts they have included are: the UK Supreme court, going back to 2009; cases from the Court of Appeal that go back to around 1960; most High Courts (including chancery,commercial, administrative, patent) and tribunals (including VAT, Tax, Immigration etc), which go back on an average around 25 to 30 years.

‘We also have Upper Tribunals going back to similar time periods. We have some lower courts too. We try to update cases as soon as they arrive,’ he said.

In short, this is a hugely comprehensive data set of English law cases.

He added that the UK variant of CaseIQ (the name of the company’s system), like its Indian and US counterparts, performs contextual legal information retrieval. The context contained in uploaded legal documents is automatically extracted and understood through proprietary algorithms. These documents may include pleadings, lower courts judgments that one might want to appeal against, and various kinds of memorandums.

In terms of specific capacities, Yadav said: ‘When a pleading is uploaded, CaseIQ recommends other cases with similar material facts and legal issues present in the pleading that might make your pleading more persuasive.’

But, this may just be a first step, and now that the company has the English law data and the tools to explore it, there are many future options to produce more capabilities.

Commenting on what this move into English law research means, Yadav concluded: ‘The UK is very important to us for not only being the second largest legal services market, but also for being the the source of Common Law on which many judicial systems of today are based.’

‘Ultimately our mission is improving access to justice through the leveraging of technology, wherever that may be, a developing nation like India or developed western ones like the UK and US.’

( P.S. If you are an English lawyer and are thinking of trying the system out, Artificial Lawyer would be very interested to hear your feedback and how it compares to what is already on offer. )