Artificial Lawyer caught up with Jake Heller, CEO of legal AI-driven case research and analysis platform, Casetext, to hear his thoughts on the company’s fifth anniversary.

Heller begins by noting that the fifth year of successful operations for the startup will mark the launch of a campaign to bring Casetext and its CARA research tool to literally thousands of smaller law firms in the US that cannot afford the big brand legal research capabilities (which incidentally have both now launched AI-powered functionality – see story).

‘The anniversary gave me time to reflect on what we’ve achieved. We’ve done so much work to make a good product and now have many Big Law firms as customers, but I wondered: can we make an even bigger impact?’ says Heller, whose company has received over $20m in venture funding so far.

‘What if we could expand functionality and make it so that we could help the 700,000 small firms [in the US]? We could make a big difference,’ he adds.

Right now they have clients such as White & Case and Quinn Emmanuel, firms that see the benefits of doing NLP-supported case review and research and can afford all the bells and whistles that the full CARA package includes.

But, small firms have a double whammy of a challenge: they lack the financial resources to invest in AI research suites and they lack the additional staff resources to do that research work manually. The answer is an economy-priced AI system that is affordable and very fast that allows lawyers to prepare for trial in a comprehensive, but rapid way. This is what Heller now hopes to achieve.

Heller also notes: ‘One lawyer alone has more need to be efficient than a group of ten lawyers working on a matter.’

And this has a deeper impact: clients who don’t have huge resources go to smaller firms. Smaller firms may go to court with less ability to do detailed case research. Hence, they may lose in court versus larger, more prepared clients. The end result: a justice deficit, where ‘access to arms’ becomes the defining factor, not the quality of the lawyers or the facts of the claim. And that can’t be a good thing.

However, selling into the 700,000 group of law firms is not easy. Heller notes that selling a software package to one lawyer at a time is tricky. Selling to a huge firm like White & Case is not easy either, but once adopted the system may be used by dozens of people there.

At present Casetext serves about 250 small law firms, a drop in the ocean out of the total, but sufficient to make Heller see he is onto something.

After getting feedback from the smaller firms, one message resonated. When asked what they would do if they couldn’t use Casetext, which is understood to be more affordable than the Big Two’s research offerings, the partners at the firms said they probably would have to refer to a law library and do the research by hand. But, most small firms don’t have large law libraries. Or they could chance Google, though Google is clearly not the best means to conduct detailed legal research. In short, they’d just have to accept they were going into court at a disadvantage. 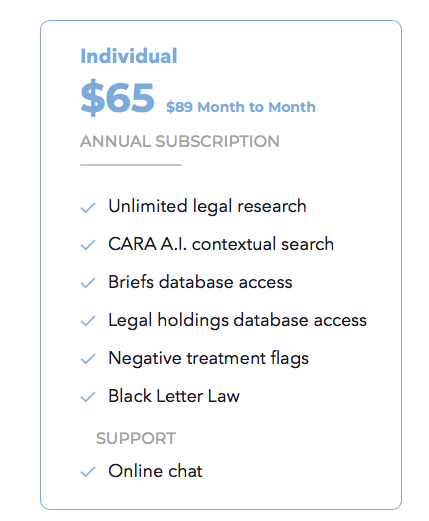 Artificial Lawyer has to say that the economics of legal technology is something we all need to talk more about.

It’s often an issue that gets brushed under the carpet because it’s Big Law that often gets the first taste of new automated applications. But, Big Law is a small part of the legal world as a whole, certainly on a global scale. And it’s where there are cost pressures where automation, whether using AI or any other method, really has most value.

So, it’s ironic that the firms that most need automation – as they are under price pressure all the time – are the least able, or likely, to use such technology.

To wrap up, Heller points out that Casetext can be paid for by credit card. No need for a massive contract and tonnes of apps in addition that you don’t want.

That may seem a minor point in a firm with PEP at $1m per annum, but for a smaller firm not having to commit to an annual subscription or need to go through a complex customer contracting process could be a big deal. Heller adds that it’s possible they could even start a ‘pay what you use’ model, like we have for mobile phones, though this is not officially planned yet.

Good luck to Casetext and Heller and congratulations on the fifth anniversary. The message he brings is one that is hard not to support: legal tech is great, but if it doesn’t also help the rest of the legal market and is just for Big Law then what are we doing…?

P.S. Below is a short video about Casetext for small law firms.