KPMG’s 2019 Technology Innovation Hubs report has found that the top five innovation hubs in the world are:

While coming fourth overall may not be great, the UK was one rank lower in the previous year.

The global survey of 740 business tech executives globally from companies, venture capital firms, and angel investors that focus on technology, also found that nearly 60% believe that it is likely or very likely that the technology innovation centre of the world will move from Silicon Valley by 2023.

Which centre would take over remains to be seen, but based on KPMG’s data it would probably be New York or Beijing in China.

Does any of this pertain to legal tech? Yes, indirectly. Centres of innovation tend to also see plenty of VC funds and investors, which can be vital for funding new ideas, they also see concentrations of talent with a focus on key areas such as machine learning. So…in this regard it matters. And, it’s nice to see that little old London is ranked equal fourth after such massive centres as Silicon Valley, New York and Beijing in terms of its position as a tech hub in general.

It’s interesting also to see London matched with Tokyo, a place where we are only just starting to see a legal tech sector emerge. However, its skills in areas such as advanced automobile manufacturing and robotics no doubt helped it to reach a high position in the tables.

Ian West, UK head of TMT at KPMG said: ‘It is great that the UK’s technology sector is appreciated as the most promising market for technology breakthroughs in Europe, and that London is seen as a major hub for big data, fintech and a variety of digital technologies. Despite the uncertainties presented by political hesitations and other economic factors, the UK and London has not lost its shine when it comes to its technology pedigree.’

Here is the list of top cities seen as leading technology innovation hubs:

As can be seen, the USA has five centres in this short list, Europe has three (in London, Berlin, and Paris), and Asia Pacific has seven. The Middle East has one, in Israel.

Coming back to the UK, KPMG said: ‘More than $7.7 billion was invested in UK start-ups over the course of 2018. This was more than 1.5 times the level invested in fast growth businesses in Germany, and 2.6 times the levels of investment seen by the start-up ecosystem in France.’

‘Technology underpins the competiveness and development of almost every sector,’ concluded West.

Overall, good news for the US and parts of Europe, but especially good news for Asia, which has the most recognised tech hub centres as a region in the list.

The report noted that the following makes a good centre for innovation, which is useful food for thought: 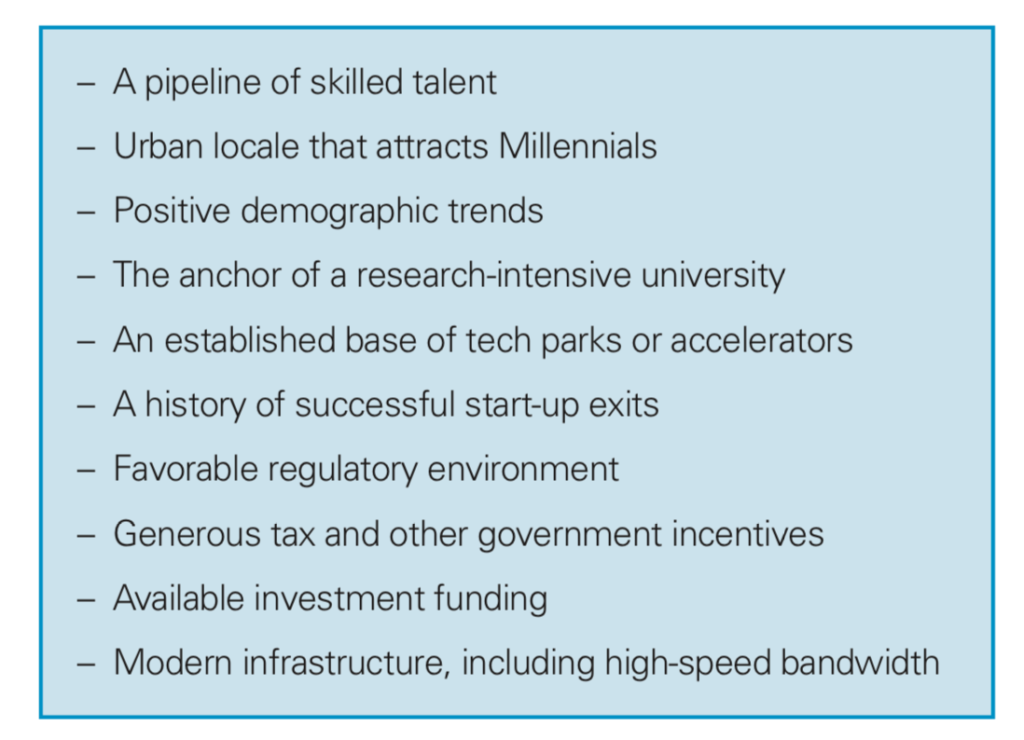