Yesterday, one of the largest legal tech events in Europe took place: the British Legal Technology Forum (BLTF). What went down and what can we learn from the mood music inside the event about the current state of the legal tech sector? Here are a few thoughts.

The BLTF is a classic legal tech event, with a huge exhibition space, a maze of vendor stands and multiple stages with a mass of keynotes and panels. It was chaired by legal tech godfather, Richard Susskind, and had sponsors such as digital security company, Masergy, which AL hadn’t heard of before, but apparently helps several major law firms protect themselves, and stalwarts Thomson Reuters. So far so good.

But, what has AL learnt? And interestingly that was a question people kept asking AL’s chief reporter as he wandered the stages and rooms. And that is a very good question. What did I learn?

One of the funniest things was what AL is calling the Post-Hype AI Hype, which refers to the strange position we have put ourselves in by declaring that the AI hype wave is over and that now we are going to only focus on practical stuff and not even use the term AI if at all possible.

Sounds fair enough….except it’s impossible. Several speakers started off their presentations by introducing the Post-Hype scenario, and in doing so inadvertently created a new kind of hype, i.e. the post-hype hype about AI.

Also, the point about not using the term AI was quite hilarious. A speaker would do the usual post-hype preamble, say that they no longer used the term AI, and then gave a 20 minute speech where the term AI was used every 45 seconds.

Why? Because there is no way around it. Sometimes they’d deviate into saying ‘machine learning’ or ‘natural language processing’ – but the truth is, it’s just so much easier to say AI. And AL would guess that just about everyone in the room knew what this meant in the legal sector context. So why avoid it if we all understand it? Hmmm….we live in strange times.

So, irony was the first learning of the day. The second learning is what James Joyce called ‘ineluctable modality‘, though in this case it’s the ineluctable modality of the term AI. And for that reason Artificial Lawyer has decided not to enjoin the post-hype hype party, and instead to press on to the next stage of this technology’s evolution and its journey.

Artificial Lawyer will proclaim the AI terminology with pride and not try to pretend we can get around it. Who cares if a bunch of marketing people have over-used the term? We know what it means.

The Legal Market is Not A Perfect Market (Or Maybe Not Even A Real Market….)

The main keynote speaker was Lisa Sewell, Managing Director UK & ME, Dentons, who gave a classic rendition of why the legal world will change and how legal tech will be a key part of this.

She pointed out how Amazon changed the world of retail and that was pure capitalism, with the company that is offering the best service and best prices winning the day. She also mentioned the Big Four and regulatory openings as threats to the status quo.

The key argument was that the status quo is under threat and that, to use the title of her talk, we needed to get elephants (i.e. law firms) to run, rather than plod along. 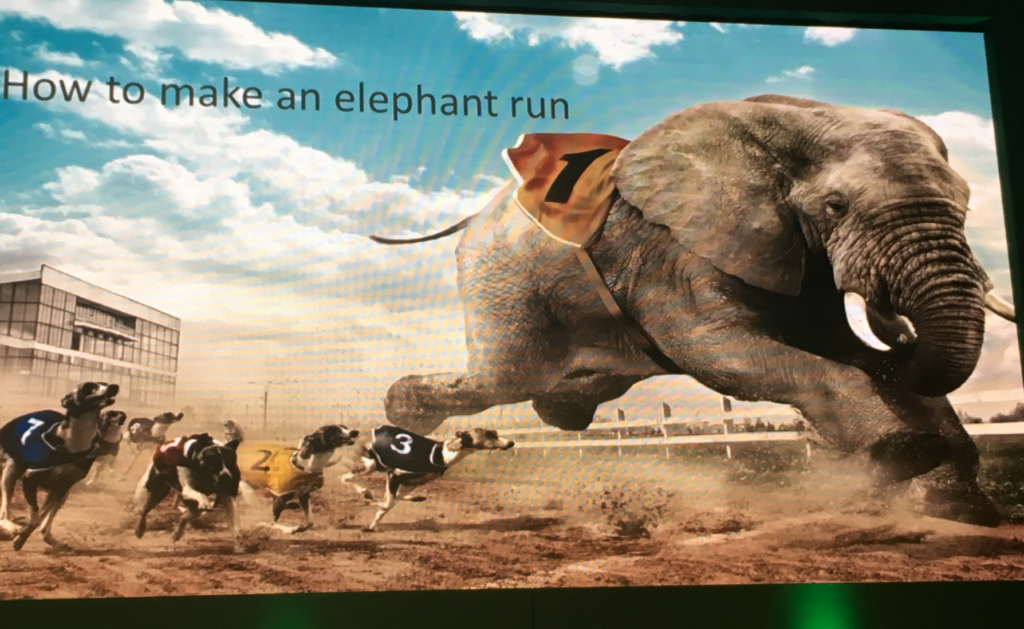 Susskind later made an observation along the lines of: partners at top commercial law firms are doing very well and are happy with the way things are. And of course they are…! They’ve never been richer (at least at the very top end of the market in relation to the higher value advisory work.)

This to some degree dented the argument that we’re in a free market that will naturally see efficiency and the need for it lead to change in the legal world.

Artificial Lawyer picked up the point when questions were allowed and asked: Isn’t the real problem that law firms are not under sufficient pressure to change because the shareholders and C-suites of corporates are not putting enough pressure on their internal legal teams to change? I.e. we have a broken market that does not operate as a free market in the legal world because the real buyers have been replaced by a procurement group (the in-house legal team) that is not held to the same level of account as other business units.

Or in a nutshell: the legal market is not really a true market, nor functions like one.

Sewell replied that law firms are responding to pressure from clients by finding new ways of producing legal work, such as via finding cheaper legal resource. But, that didn’t really answer the question, or address the broken market idea AL is proposing.

Any road, the ‘Broken Market Theory Of Legal Sector Inefficiency‘, which is the title of a 12 volume epic that AL is writing, will have to wait. Let’s press on.

iManage’s RAVN Team is The Legal Sector Version of Spotify

Out of all the vendors that presented, the talk by Nick Thomson, the new boss of iManage’s AI team, RAVN, was probably the most interesting.

Thomson, as readers will remember, took over RAVN with a view to knocking it into shape and figuring out how to utilise its great AI capabilities in unison with iManage’s overall DMS strategy.

Aside from the nice factoid that Thomson reduced around 85 RAVN projects down to around 15 that had real business applications, rather than being cool experiments, what he explained was that RAVN is basically the legal version of music streaming service Spotify.

It’s what…? Let me explain.

AL loves metaphors, analogies and parables, it always seems to be the best way to explain things, especially something that can be quite abstract like legal tech. And, as has been said by many a clever person: if you can’t explain something simply then you don’t really understand it.

So, this was both a refreshing presentation and got the brain buzzing with ideas – two extremely hard things to do.

The last thing that really stood out from the mass of speakers were the views of the panel on the reality of using AI systems, which Richard Tromans, Founder of Artificial Lawyer, chaired. The panel was a stellar cast of:

It was a bit hard to take notes and chair the panel at the same time, so here are some of the key points amalgamated together from the three speakers above.

The key learning here was around the positive tension between trying to build an enterprise level legal tech architecture, that encompassed data pathways, knowledge, event driven AI review work and KM-based AI review work, along with growing a population of lawyers in the firm that were happy to use the tech and become internal advocates for it………versus the need to also keep bringing in point solutions in order to keep up to date with what was in the market, to pilot them, and also keep a range of other solutions on the go at any time, as not all projects needed the same AI solution.

In short, you have a platform challenge and a point solution challenge happening at the same time, with a heavy dose of cultural change mixed in, just to make things even more complicated.

It was also interesting to hear how the financial services sector these days took a platform, ‘total enterprise’ approach, with even the remotest corners of a bank, for example, using the same tech ecosystem.

This was compared to a law firm, where although there were some universal tech applications, a lot of the new tech e.g. around AI software, was still at a level of a collection of point solutions, meaning that the firm was in a state of perpetual piloting, as Kate Tomlinson highlighted.

But, the panel felt that although law was behind fintech that eventually we would catch up, and hearing about the efforts of CMS, Freshfields and NRF, there is plenty of reason to be optimistic there.

Plus – Special Bonus Insight: Lawyers Are Better Than Doctors (At Data Security)

Artificial Lawyer managed to have a quick chat with Masergy (see above), and heard about all the things they do to protect law firms from hacks and the like. But, the one bit that stuck in the mind was that lawyers are much better at data security than doctors, (at least in the US), because the medical world is more worried about malpractice law suits and paying for professional insurance than losing patient data.

This was an interesting insight into the way different professions balance risk.

Craig D’Abreo, of Masergy, also noted that although about half the law firms they encounter still worry about sending/keeping data in the cloud, that from their experience it’s quite likely that keeping data on premises is even more risky. After all, which business is going to have invested more in data security?

A – a company that is 100% focused on data security and holding your data.

B – a law firm that mostly spends its money on paying lawyer salaries.

And that’s all folks. Many thanks to Frances Armstrong for inviting Artificial Lawyer along. BLTF remains one of the most important legal tech events in the calendar and it delivers the chance to really gain some real insights that you may not have had before.