Many readers will have seen the news that Artificial Lawyer published last night about the signing of the deal between Big Four firm, EY, and the Legal Managed Services (LMS) arm of Thomson Reuters. But what now? And what does this really portend for the legal world? Here are some thoughts.

Let’s Start At The Beginning

What really is LMS and why did TR buy it in the first place back in 2010?

According to Wikipedia, LMS, or Pangea3 as it once was called, was:

In 2005, Pangea3 opened its first office in Mumbai with 35 employees. It has since grown to 1,000 U.S., U.K. and Indian attorneys, engineers, scientists and professionals providing global legal outsourcing services in seven offices across the United States and India.’

OK, so it all started 15 years ago and grew fast to around 1,000 people. However, when TR bought it in 2010 it was already 650 staff. So, in the intervening 9 years it only grew in size by 350 people. Tech may have played a part in keeping the numbers down, but under TR the LMS didn’t grow exponentially.

Below is a cutting from the original announcement back in 2010. It makes interesting reading and really adds some context to what has just happened now with EY. 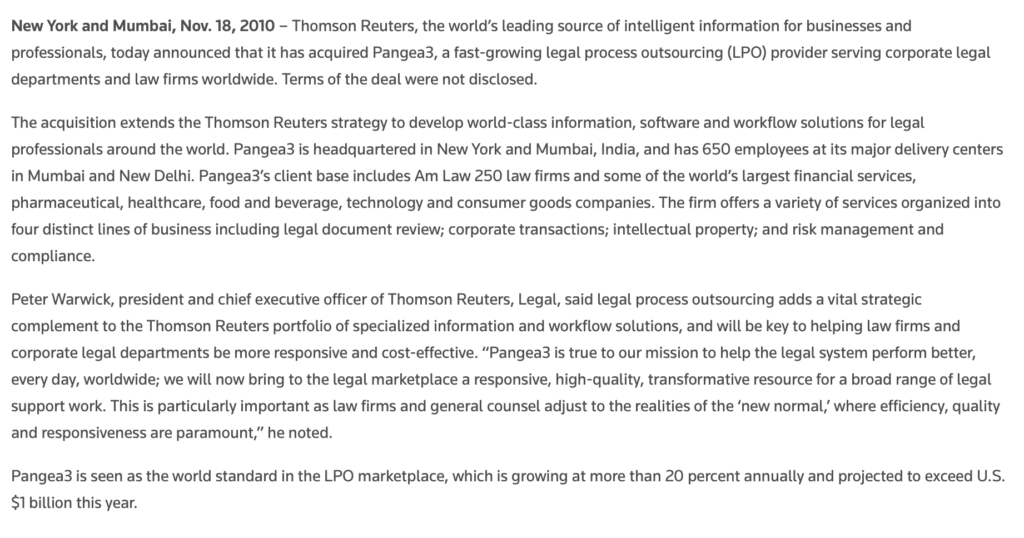 At the time Peter Warwick, the boss of TR legal, said that the LMS was a ‘vital strategic component to the TR portfolio of information and workflow solutions’.

The key word there is ‘strategic’ – i..e part of a wider, thought out, business plan. And a plan is there to get somewhere.

But, where was TR trying to get to? To build a global law firm, albeit one focused at a process level? To compete directly with the very same law firms it is selling content and tech tools to?

AL remembers back at the time of the deal noting that it seemed a bit unusual in terms of cannibalising legal work. But, TR seemed happy.

However, now the world has changed. Aside from TR stripping out parts of the business that it doesn’t see as core any longer, for example the sale of the Financial and Risk group, the time when law firms didn’t see LPOs and process-focused legal businesses as a threat is over.

This is because there is going to be a bifurcation in the world of legal work, between complex and process. And law firms still want to hold onto the process work. If they didn’t they would not be investing in legal AI systems, or building process centres in less expensive parts of the world.

Here is an image AL made for the news of the EY/Riverview Deal, it sort of sums things up. 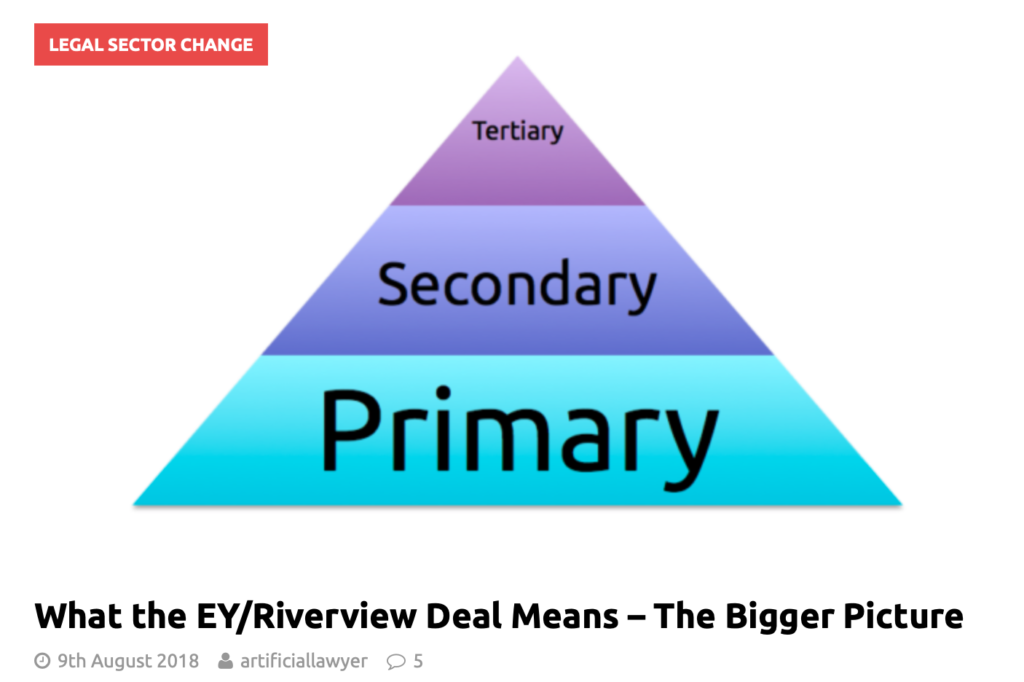 The logic and wider market change behind the Riverview deal is exactly the same as for LMS. Legal work can be seen as primary, secondary and tertiary labour.

EY sees this and has realised that with its huge scale, multi-practice offering, and huge client reach, it can exploit legal process work in the primary and secondary, while also offering some tertiary/complex work to clients.

It could have built this up by doing individual hires. But that would have taken years. Why not just buy what is already there….if it’s on the market. And, as AL mentioned in the news piece from last night, sources had told this site that TR had decided to sell the LMS about 6 months ago. It was a match made in legal process heaven.

In many ways there is no big ‘what next?’. EY will add the 1,000 staff to the ones it already has who cover process/managed services and who look after AI-driven doc review. Life will go on. It’s just that EY will have a lot more firepower in this department than before.

Strategically there is also no deviation from previously. If you want to consider the pyramid of legal labour above in more detail, have a read of the piece from August 2018 here.

But, from AL’s point of view, what matters now are two things. One is fairly technical, the other a macro-market issue.

First, will EY decide to keep using eBrevia, which is now part of Donnelley Financial, to do the bulk of the AI-driven doc review, or will it use Luminance, which it has just signed a major deal with. The answer may not matter too much to EY or the clients, but it will matter to the AI companies. Just think of the volume of work that EY’s process arm will see in the years to come and the clients it will work for… Huge potential there. Huge revenue also for the AI companies. So, for the legal AI sector the EY deal really matters.

Of course, they may want to keep using both –  or even add a couple more legal AI tools in there too. There is no rule about only having one.

Second, what is the macro outlook? Clearly rivals in the process space will be ‘watching closely’, as they say. From Elevate to UnitedLex and many others, there is now a real competitor forming in the shape of ‘EY PROCESS LAW’.

They will not necessarily have to respond this week, but they know now that competition in this space is only going to get more fierce and that will drive strategic decisions on growth and building new capabilities that offer some competitive edge.

The other Big Four will also be watching closely. One would guess that PwC that has a big legal process centre in Belfast will be especially interested in what happens next. Will it drive them to buy up an LPO of their own as well? They could easily pay for whatever is out there in the market. With revenues of $41 billion in 2018 it can buy whatever it wants.

For law firms again this will not drive an immediate response, but in the longer term they know if they stand still on offering process-plus AI review then they are going to start to see clients slip that work somewhere else.

Many are already in a good position, especially some of the large UK-based firms, which have invested time into AI and built process centres already.

The US firms…? It’s not so clear. First, EY Law cannot practice law on the ground there because of Sarbanes-Oxley and Bar rules on co-ownership of legal practices. But, EY can still suck process work out of the market to places where it can operate.

So, in the US, it remains to be seen how much impact this will have. The real impact will likely be in London, the rest of Europe and Asia-Pacific, where EY can operate generally as it wants to.

OK, got to go. But, here is the last word from someone at LMS – and apparently the vast majority – if not all of the current staff – are meant to be transferring over to EY, which is good to hear.

Eric Laughlin, Managing Director, Legal Managed Services, Thomson Reuters, said: ‘Clients acknowledge that they need to modernise their legal operations; with Pangea3 and EY together, legal departments will benefit from broadened legal services offerings that bring the legal domain knowledge and scale to help guide and implement their transformation agenda.’

P.S. The transaction is expected to close in the second quarter of 2019, subject to the satisfaction of various closing conditions.