Legal AI pioneer, Seal Software, has launched a marketplace that will aim for clients to eventually share, or sell, their own NLP models to other users of the platform, in what is a groundbreaking and highly collaborative move.

The marketplace launch is part of a new version of Seal, V. 7, that covers a wide range of improvements. But, this is perhaps one aspect that could move the market in the medium term, as it lays the foundations for corporates to share their own AI review-related IP with others.

To start with the marketplace will provide clients with Seal’s set of ‘accelerators’ for matters such as GDPR or LIBOR, but, Julian Tsisin, VP, Legal Technology and Operations at Seal, told Artificial Lawyer: ‘We want to build a community so they can share models securely. The community can then share and grow.’

Seal works primarily with corporates, rather than law firms. What the marketplace will do is allow a team at one company, in telecoms for example, to share specific NLP models they have trained up for certain types of document that perhaps are not common. This then accelerates the ability of an industry sector to leverage Seal’s legal AI platform, as others don’t have to do all the training themselves.

As noted, if a Seal client wants to sell their models they can. They also can control who they share it with, and only the model goes to another party, none of the training data goes with it. Or they can just use Seal’s collection of ‘accelerators’, as usual.

Overall, this should create a more collaborative approach to the use of AI tools, at least for those that already use the Seal platform. Artificial Lawyer recently heard from a General Counsel about this very point, as to whether there was a place you could find a collection of NLP models made by other legal teams.

Tsisin added that eventually this could lead to market standards emerging for certain types of documents.

This seems to be a logical extension of the use of automated tools and collaboration in the legal market. I.e. as more businesses seek efficient ways to contract, and then review those contracts, this will steadily drive a move to standardisation in some areas.

Seal will continue as usual to sell its ‘accelerators’, i.e. pre-made NLP ‘kits’ that allow a business to quickly review for specific issues, such as GDPR or LIBOR – which can be modified and built upon by a client. And the standard ‘out of the box’ sets of provisions will also be there. Customers will also continue to be able to train up their own models and use them as they wish, whether they want to share them, or keep them just inhouse.

Tsisin noted that although companies may compete on some levels, when it comes to matters such as legal document review there are significant benefits from a collaborative approach.

He also explained that he saw no reason why LPOs or others, could not eventually one day also develop NLP models inside Seal and share, or sell, them in the marketplace for the benefit of corporates.

‘The whole industry can share and benefit from this,’ he added. 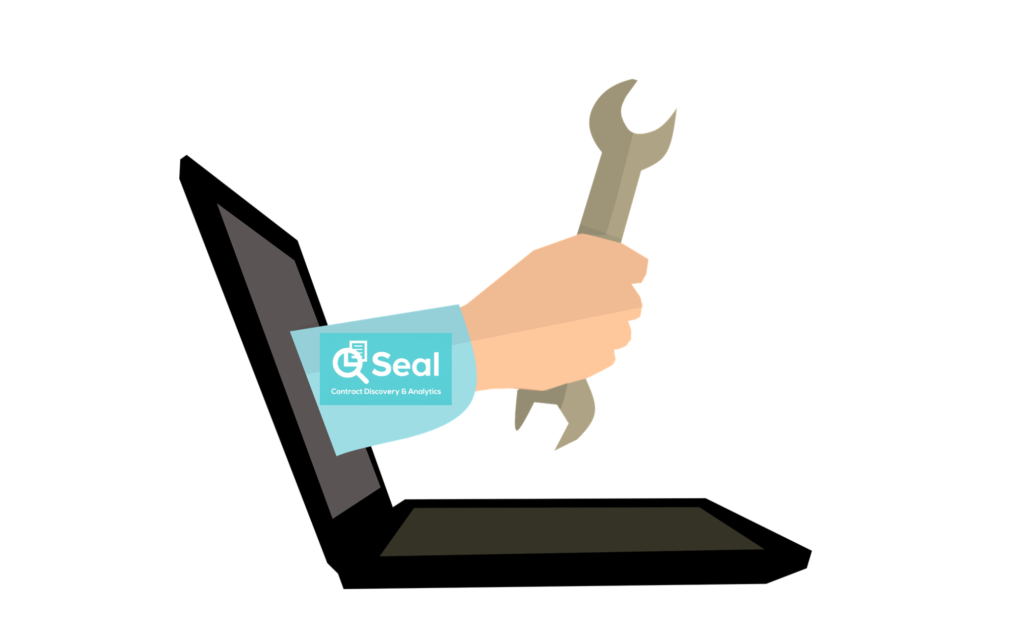 More broadly, Tsisin said that although the marketplace is important, the new V.7 release is also one of the largest and most comprehensive changes to what Seal offers to date.

One aspect he noted was an improved UI and search facility, making it a lot easier for clients to find their documents, or aspects of reviewed documents in the Seal system.

The UI now adapts to the type of searches you do as a client, making it more efficient so ‘you can have your own user experience’ he said.

They have also reconfigured the backend of the platform and are taking a containerisation approach, which makes the deployment of the Seal platform much more efficient for users.

There is also an improved logic engine so users can add rules that can then be executed on data coming out of a review. And much more. The full list of improvements can be found here.

But, for Artificial Lawyer, it’s the marketplace that looks to be the game changer. If the world’s leading companies – many of which use Seal – all start sharing, or selling at an affordable price – custom models that help other legal teams then it’s a clear win-win.

It could increase the use of AI tools, (and specifically Seal – as the models still have to work via their platform), it helps drive standardisation, and more generally it supports an ethos of collaboration for the benefit of all.