Smart contract consortium, the Accord Project, has been welcomed into the Linux Foundation – the global and well-resourced open source organisation that has over 1,000 corporate members, ranging from companies such tech giants Google, Intel and Microsoft, to manufacturers such as Toyota, Airbus and GE.

The Accord Project, which grew out of its foundational member and smart contract pioneer, Clause, has already become a global group of law firms, corporates and regulators/standards bodies with the aim of creating a shared approach to the development and use of complex smart contracts in the legal field.

However, to come under the wing of the Linux Foundation is something else and takes Accord up to a whole new level, both in terms of the exposure the underlying tech stack they have developed will now get, and in the potential for the greater financial, strategic and technical support they will get from the Foundation’s stellar group of members and board.

The move is totally in keeping with the initial strategy of Clause and the wider constellation of members created by Accord – which has been not to just get the technology right, but to create the right industry buy-in and support from standards setters.

In this regard, the ‘adoption’, as it were, of Accord as a project that the Foundation will now support and nurture globally is of huge value. 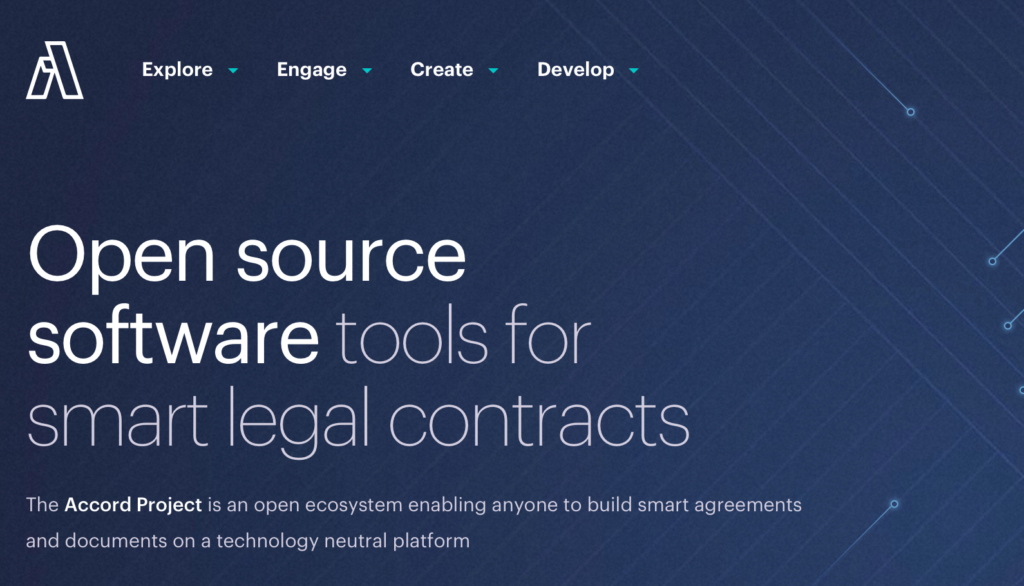 To put what Clause and Accord have done in context consider this: most legal tech startups focus on getting to a solid first product, perhaps do an incubator or two, while steadily widening a small circle of leading law firms or inhouse teams as pilot clients.

This is a great strategy and takes an enormous amount of energy, effort and endurance.

But, Accord’s main team – which is in many cases also the Clause team – with leading figures, such as Peter Hunn, founder and Dan Selman, CTO, and many others – have built a global network of organisations not just piloting the system and contributing to improvements in the software, but also working with bodies such as ISDA, IEEE and IACCM to create standards and protocols for using smart contracts.

In short, their strategy has been to build an entire eco-system around their technology, at the same time as building and improving the core software.

They’ve also – just to make their lives even more complex – taken a two-strand business strategy, with the Accord Project’s software offered primarily for free and open source, downloadable from Github, while Clause – the ‘kernel’ at the heart of Accord – has just moved to a commercial footing.

As Accord explains, they build Apache-2 licensed Open Source libraries of code, and these can then be picked up and used by any commercial vendor to build products.

And they’ve done all of this in just over three years.

Plus, yesterday Accord held its inaugural Forum event in London – which Artificial Lawyer was a supporter of and media partner for. And, there will be a full write up of the event and the many great presentations next week.

So, gaining the support of the Linux Foundation is really just the ultimate validation of the incredible hard work and tenacity of the team behind Clause and Accord.

And, it’s worth adding that if smart contracts do eventually see widespread adoption – which Artificial Lawyer strongly believes they will – then the Accord Project and the Clause team will have played a central role in making that happen. Bringing a point solution to market is one thing – and that is an incredible achievement in itself – helping to pave the way for a global change in how people contract with each other is really on another scale.

Let’s give the final word to the Foundation and Accord.

Mike Dolan, VP of strategic programs at The Linux Foundation, said: ‘The Linux Foundation is home to communities that are advancing the world’s most critical software infrastructure. The Accord Project represents an opportunity to collaboratively build the framework necessary for the next generation of contracting. Their work is essential in supporting the software that runs our lives.’

And, Dan Selman, co-director of the Accord Project and Chair of its Technology Working Group, said: ‘Our goals for the Accord Project are to promote the use of open legal technology, attract a self-sustaining base of contributors, supported by a rigorous governance structure. Linux Foundation has been an excellent steward to scores of open source projects, large and small, over many years.’

‘We believe Linux Foundation is the perfect home for Accord Project and look forward to learning from the collective wisdom of the Linux Foundation community and taking advantage of the various services and programs they offer,’ he concluded.

Developers, attorneys, business and finance professionals and other contract users can access the Accord Project online at accordproject.org and the code at: