Legal blockchain company, Integra Ledger, has launched a Blockchain Integration Wizard – which aims to makes it easy to integrate data derived from any source inside a law firm or legal team with a blockchain layer. The launch comes with the news that Elevate Services, the fast-growing law company, is now using Integra’s blockchain tech in relation to eSignatures on live client matters.

In short, what the ‘wizard’ does is allow a user to draw data from a range of tech solutions via a tick box interface, specify what aspects you wish to focus on, for example, esignatures or certain types of document data, then set up the process of creating hashes on a permissioned public blockchain to retain an immutable record.

David Fisher, CEO of Integra, told Artificial Lawyer: ‘The wizard is a website that lists lots of tech companies, for example Luminance, LawGeex, Net Documents and many others. You go through and click which ones you’d like to set up. Then you click on the aspects that you want. The entity data is stored on your DMS and the hashes are on the Integra blockchain.’

This permissioned blockchain is itself created by the legal community, via the many law firms and other legal businesses involved that each act as a node in the network. In this way the legal community is running its own blockchain that it can use to verify data and provide evidence such as if a document really was signed. The hash linked to the signature can also then relate back to key entity data associated with a specific document.

Fisher noted that the transaction cost of creating an esignature via Integra’s system is a fraction of a dollar, as compared to a dollar or more for many standard esignature systems. When used at scale this makes a difference – and in the long term cost may become a key selling point for the technology.

There is also the added benefit of the secure and immutable database, which no single party needs to own, or has to worry about managing, as it’s a shared ‘data layer’ sitting between all the organisations that have been granted access to it. Again, there is a cost and resource saving here.

In fact, from Artificial Lawyer’s point of view, once you move beyond the debates over the underlying technology – which many users may not even want to know about – one of the key arguments for using this approach is simple economics, and every business wants to save money. 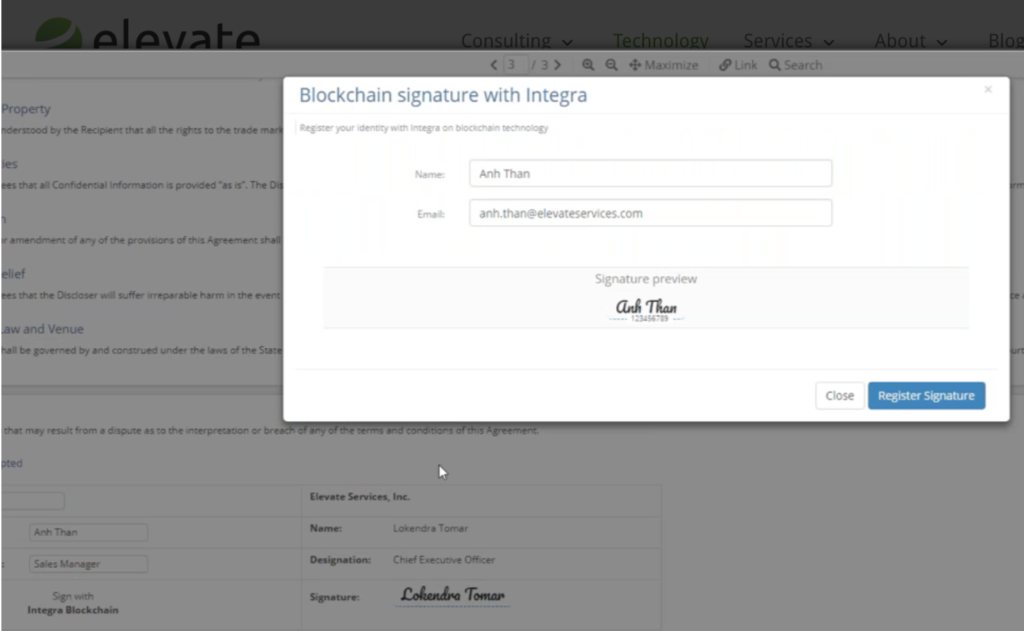 Fisher added that the goal here is to make blockchain technology as easy as possible to make use of in the legal world and overcome the barriers that remain.

One example of a major legal business making use of the tech is Elevate, which is now using Integra’s blockchain for esignatures.

John Croft, President of Elevate, told Artificial Lawyer: ‘There is an ever-increasing amount of data in the world and there has to be a better way of dealing with it. So, for now, we have taken one simple thing: signing a contract; and are now using blockchain tech to create an indelible stamp [of the signature]. This provides proof and is more secure.’

Fisher concluded: ‘Every time you sign with a blockchain signature there is a hash of that doc. And with Integra it’s verified by the world’s law firms and legal businesses.’

Integra is also the founder of the Global Legal Blockchain Consortium, which today has 250 members around the world. In effect, this group may eventually become the backbone of the Integra Ledger blockchain layer.

There is a quick mention of Elevate’s use of Integra in this short video below, which covers their CAEL contract management platform.

– Thanks to RSG Consulting for inviting Artificial Lawyer along to the event in London where Integra and Elevate made their announcement.