In what is a tale of two demo days, Mishcon de Reya’s MDR LAB and Big Four giant PwC, have held their end of programme events for their incubator and scale-up accelerator respectively.

The TL/DR version is this: the legal tech startup/scale up world is still in great health and producing applications that both surprise and address real needs. That said, there is also a developing ‘pick your family car model’ scenario emerging at the same time, where there are now multiple providers of similar applications, each with certain special adaptions and specific benefits, and the challenge for the buyer is to pick which one suits them best, i.e. rather like picking between a number of different car manufacturers for a four-door saloon, where from a distance many of them appear to be similar.

MDR LAB’s demo day, helmed by the always engaging Nick West, who is CSO at the firm, introduced six companies at the firm’s HQ in Holborn. Each made a short pitch to the audience and several mentioned that ‘if there are any investors in the audience we’d like to have a chat..!’.

West noted that MDR LAB was more than 10 weeks over the summer, and was about a long term engagement with the firm. This was a view echoed by one former cohort member, Thirdfort’s Olly Thornton-Berry, who said: ‘A dog is not just for Christmas….and the Lab is not just for summer.’

PwC’s Scale programme took a different tack. It picked eight companies, which in theory are intended to be scale-ups, i.e. beyond startup level and now at the point of rapid growth. Their event was held at the Law Society, in the huge Victorian era Common Room. The audience was populated with many PwC staffers and a number of clients.

The audience members were given a score sheet, with questions about each scale-up’s pitch and value proposition. You could also make more detailed comments. You then had to hand in your feedback to PwC. PwC intends to use this to see what its own people think, and also to see if clients have any needs that can be addressed by these legal tech companies, or perhaps others. In short, PwC was making sure there were some real client engagement outcomes coming from this demo day.

Head of Tax at PwC, Marissa Thomas, (because Legal is inside Tax at PwC), made the introductory speech for Scale and she mentioned that there is a ‘huge need for legal teams to transform and modernise’. PwC wants to help them to do this, in part via its New Law team, and also via its Scale as a Service project, which looks to help clients make use of the tech companies they have worked with.

And, Sarah Mack, also of PwC, who helped organise the programme and Scale event, added that: ‘Legal teams are seen as cost centres, but that is changing’ in part because of the use of technology.

She noted that they had initially looked at 250 legal tech companies, had detailed interviews with just 25 and then chose eight for the programme.

Each Scale company made a short pitch, but then each of them had to go around the room, moving from table to table every five minutes, where they were grilled by the people seated there. All in all an intense experience for the tech companies, who really were under the microscope and received a lot of detailed feedback from a large audience.

OK. So that’s what happened. Below is a summary of the various startups and scale-ups with some mentions of the aspects that stood out.

This is a UK-based prop tech startup, backed by the Land Registry. They have tried to solve the problem of residential sales falling through with a ‘Property Handshake’ – which is in effect an easy to create contract between two parties, backed by an insurance policy, to help cover any losses from property deals not going through.

Hunters, a large real estate agents, is now distributing the application. They are looking to fundraise and say that they want to remain independent, rather than merging with other new prop tech companies such as Thirdfort.

Readers will already know this company, which provides English law litigation analytics, including analysis of individual lawyers and judges.

They explained that they don’t make predictions per se themselves, but rather create a data-backed ‘baseline’ that can be used by a firm or corporate to build their own predictions.

They added that it has been hard to get hold of court data in the UK.

They seek to work with governments and large companies. Their catch phrase is: ‘Social media has been weaponised.’

They can tell if the same person is behind certain posts and unveil patterns that tell you about what is really happening. They wanted to work with MDR to better understand the legal dimension, and law firms are themselves becoming more involved in this kind of cyber-related brand protection work.

Some of the examples they shared were real eye-openers, such as the ‘British Brexit campaigner’ who after analysis was clearly shown to be working from Moscow, even down to stopping their tweets when it got to lunchtime in Russia’s capital.

Based in California, this is a CRM system for lawyers that doesn’t need lawyers to do anything. So….should be a winner…!

You send in your contacts and it auto-searches the web for anything that looks useful and sends you an update about each item that it finds. You click on what you like, then click to start an email and it auto-populates the start of the email to your contact…..making the whole CRM experience super easy.

A member of the audience noted that it looked a lot better than Google News alerts.

This is a simple and clear application that helps lawyers to edit and proof their contracts. Looks useful.

Basically it shows you who is suing who. Started in Ireland and is now launching in the UK. It can also produce a dashboard so you can look at a client and see all the matters they are facing and involved in with one simple click. There is also a more detailed search interface so you can really drill into their database of court proceedings.

This will help lawyers as they can gain extra insights into their clients’ position, help with conflict checking and generally help a firm to really stay on top of what is actually going on in terms of disputes at any given time.

The aim here is not to predict outcomes, but to lift the veil on what is happening across the disputes field. Getting data has not been easy for them either here. But, they are hoping to grow the database to include all they can in the UK, including Magistrates Courts. Liked this one a lot.

Started in 2010, and is an esignature company. It’s also been using blockchain tech to support this since 2012….so, an early starter!

Many readers will already know this legal AI doc review company, even if it has kept a low profile. It does much of what the other companies in its field do. They have a particular focus on showing issues with contracts and identifying language that shows obligations.

Interesting to learn they are now working with: JP Morgan, ING, the UK Government and Cap Gemini.

Also, they don’t charge per contract. It’s unlimited and with a single fee. (Like that!)

A reg tech/compliance application. It seeks to understand what issues a company is worried about and then scans the planet’s regulatory databases for changes and then keeps you informed.

They noted that some large banks now have many thousands of people working on compliance – just to keep the bank up to date and compliant. Clearly room for some major efficiency savings here.

A contract automation company. It was introduced by Kaisa Kromhof (pictured above – main).

A key selling point the company noted was just how much knowledge gets lost if you don’t have document automation. Creating templates really helps to store this knowledge in the business. You can create Q&A forms to help fill in the templates and can send the questions to other parties to also fill in.

The other key point here was that Contract Mill is designed to be really easy to use, taking about 15 min to learn, they said. It can also be installed on a firm/company desktop via a widget.

The presentation was via a recorded video from Australia, which was different. This is a deal management platform, similar to others that readers will be familiar with.

The key aspect here is that Lexical has a focus on the first review stage of a contract’s negotiation. It also refers to a playbook and then spots issues in response to this.

This can ‘reduce contract response time from 1 hour to 10 mins’.

They will also make bespoke solutions for you. 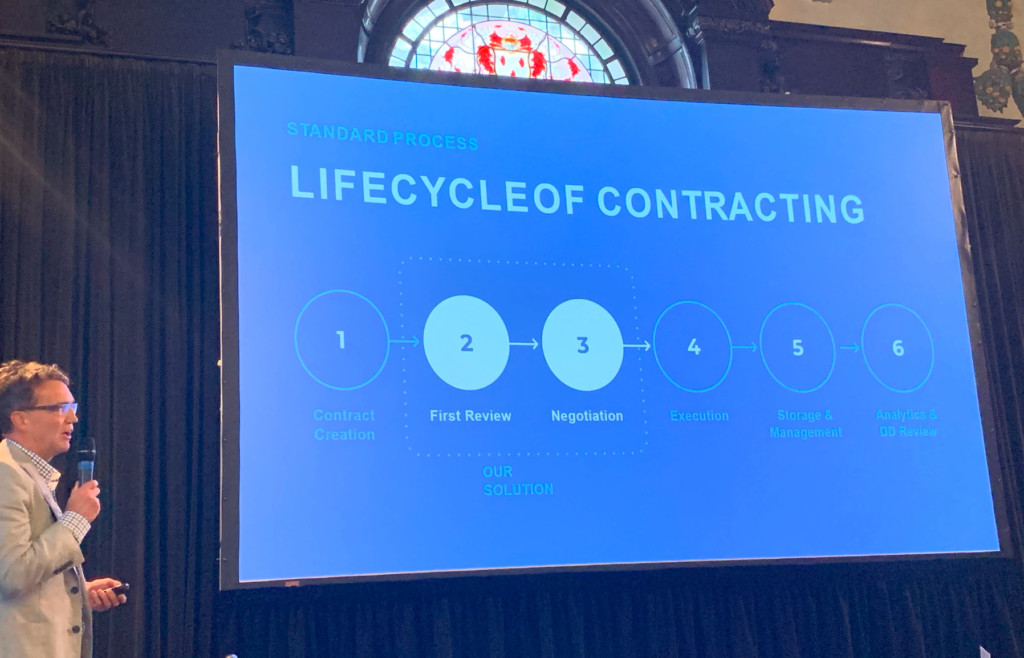 Is an NLP KM tool, mainly focused on gaining a better insight into one’s own data, such as policy documents for example in a corporate database.

Overall, a very interesting group across two demo days. When you add these two legal tech growth programmes to that of Slaughter and May, and that of Allen & Overy, and include the many others around the world, from Spain to Austria, and to the US, then there is a lot happening here, even if some of the applications are now starting to overlap with others in the market – although such a development is to be expected as the market grows and matures.

Clearly the tech companies are learning from the experience, and the firms are too in return. A win-win for all those with the desire to get involved.