Wilson Sonsini, the leading US tech-focused law firm, has co-invested in a new legal AI doc analysis system called Lexion, in a $4.2m seed funding round that will see David Wang, a Corporate Strategic Innovation Counsel for the firm, join the startup’s board. The other main investor was the Madrona Venture Group.

This is a healthy level of investment for an early seed round in what is at present a relatively small legal AI company based in Seattle. However, it has credible roots, having come out of the Allen Institute for Artificial Intelligence (AI2) – a pioneering centre for AI, created by Paul Allen, who co-founded Microsoft in 1975.

The AI company is led by three co-founders: serial entrepreneur and CEO, Gaurav Oberoi, AI technology leader Emad Elwany, and engineering veteran James Baird. And, as noted, it now has the backing of one of America’s top law firms in the tech sector.

But now, two questions: what does Lexion do, and does the market have room for another legal AI contract/doc analysis/review system?

First, what it does. In short it reads commercial contracts via what appears to be an already trained NLP/ML set-up. It then identifies and shows on a dashboard key data you may need in your business, e.g. renewal dates, obligations, status and a range of other factors.

It can then arrange all your contracts in a logical order, listing them to show different key aspects, such as the ‘next milestone’ in the agreement. And naturally, it includes all the basics, such as names/parties and amounts to be paid (see below) 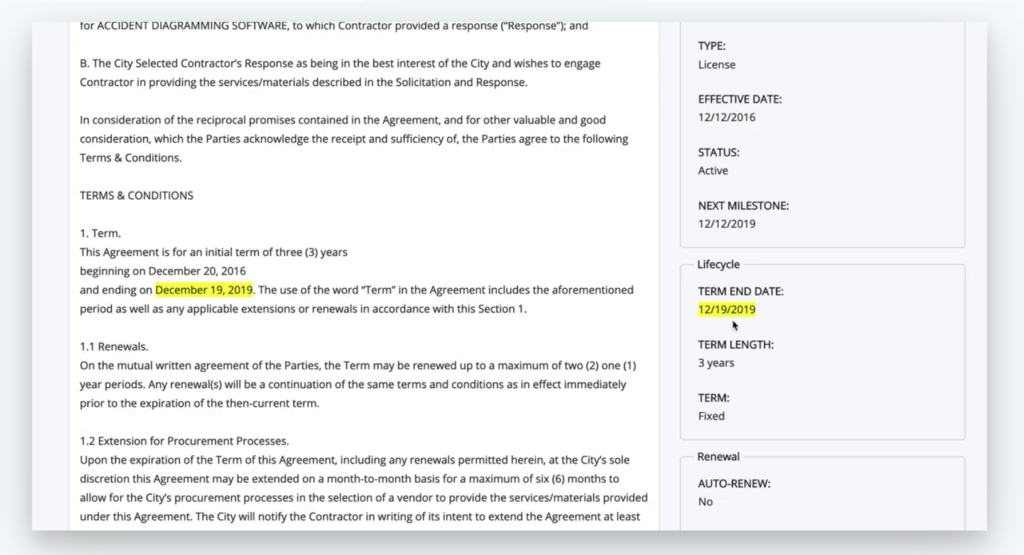 Second question: can Lexion break through in a market already packed with legal AI applications that help people to understand contract data? The answer is: yes, it can.

Why? Because despite readers of Artificial Lawyer probably knowing the brand names of several such AI platforms, the vast majority of the world’s companies do not, nor perhaps have even started to think about using one. This is especially so for medium-to-large companies, i.e. large enough to be swamped in contracts, but not on the scale of the big banks and tech giants that have already started to explore these applications. There are thousands of such companies in the US, and globally: millions.

Another positive is the pricing. It starts at just under $900 a month. So, let’s say around $12,000 per year, or £9,600. For a company with a growing accounts and/or legal team, this sum would likely be seen as a good investment that helps the company to stay on top of things without needing to hire in extra staff.

And, the people involved is another reason. Artificial Lawyer contacted Wang at Wilson Sonsini and he replied: ‘I would say that after taking a serious look at the advancements in ML/NLP outside of legal, where those advancements are coming from, and the kind of technical talent needed to make ML/NLP really work, it was our conclusion that only a company with ML/NLP as the core competency was going to be able to meaningfully advance the solution to the challenging problems in our industry.’

‘Lexion is this kind of company. We know this because AI2 is the source of the technology, because of the founding team, and because we’ve seen what they can do first hand, in the context of our deep experience as a technology law firm,’ he added.

Or in other words, this is not a team of ex-lawyers, or an already well-established CLM company or ALSP trying to develop NLP, it’s a group of techies who live and breath the technical subject matter.  They’ll also get guidance from a leading law firm – which has also invested in it and placed a senior lawyer on the company’s board. So, they have the legal aspects and a solid tech team.

Overall, and given the focus on companies they have a good chance of making an impact. It doesn’t offer some of the more subtle language analysis and Q&A capabilities that other systems have (it would seem), but perhaps that doesn’t matter. Many companies just want fast and efficient analysis and transparency of their key legal and financial obligations in their ever-growing contract stack. And Lexion does this.

If Artificial Lawyer had to hazard a guess, this will grow fast among companies in part because it has not been marketed or pitched as a ‘legal’ tech product.

It’s just ‘a product‘ that is useful to companies. Its goal is to appeal to people who likely see legal contracts not as legal work, but simply as a record of things they’ve got to do and people they’ve got to pay, i.e. practical, day-to-day realities. And Lexion’s goal is to make this as simple as possible to see.

In addition, Oberoi, Lexion’s Co-founder and CEO, said in a statement: ‘Contract management is a pain point for every organisation. Whether you manage 30 or 10,000 agreements, you still need to keep track of key obligations. Yet, the most common approach – searching through file folders, reading through hundreds of pages of legal text, tracking terms in spreadsheets, and manually emailing reminders – is not scalable for any organisation and often results in missing critical obligations and opportunities, while draining significant management time and resources. We are excited to solve this problem with cutting-edge automation, packaged in an intuitive product.’

Lexion also stated that ‘...organisations lose, on average, 9% of revenue every year due to poor contract management through erroneous overpayments, failure to apply discounts, and missed expirations, according to research by the International Association for Contract & Commercial Management.’ Which is something of a shock.

Overall, it looks like Lexion has every chance to succeed. It’s also very interesting to see Wilson Sonsini (aka WSGR) invest in what is a company that could scale very rapidly. That could leave the firm holding an equity stake in a very large company one day.