Legal AI doc review company, Diligen, has launched a faster, better and what appears to be far smoother system for teaching its NLP software what to look for in a document set, greatly reducing its training times.

Artificial Lawyer was invited along to see the demo earlier this week for what is being called Diligen Prodigy. This site has seen quite a few legal AI review demos in the last few years, and it’s fair to say this one did indeed come across as genuinely slick and easy in terms of the way the software was taught what were good examples of a section of text or clause and what to ignore.

The short version (see slides below) goes something like this:

The demo that Artificial Lawyer saw took about 10 or so minutes of training and there were about 60 clause examples used to do the training. These examples were fed through and then decided upon very rapidly – though the speed may vary on the type of clause and the legal knowledge of the user in terms of knowing one clause from another.

Two things that stood out here: the ease of use, as the system effectively kept driving examples to you, all you had to do was say ‘yes’ or ‘no’; and the accuracy counter, which took the stress out of checking accuracy – as it simply said, ‘OK, now you are good to start’. And that’s very handy.

Overall it’s a neat example of how legal AI companies have gone from having very technical and sometimes clunky interfaces that demanded you do all the hard work, to now having a very strong focus on user experience and making it as easy as possible. And that’s got to be a good thing. That said, you still have to make a decision with regard to each example that is offered up to you.

Is this a big deal? Well, it depends who you talk to. For example, Kira Systems has its Quick Study feature, but user feedback shows that not all training is really quick. Luminance seeks to promote the idea there is little proactive training at all that lawyers need to do, and that the ‘system learns as lawyers use it’ – although interactions that involve some type of text selection by the lawyer have got to count as training, right?

From what this site saw, the Diligen system was very smooth. Was this very smooth because it was a prepared example? Perhaps, but it looks like it would have worked just as well with any type of doc set, as long as there were sufficient documents to provide a meaningful number of clause examples to teach the system.

Either way, the UI was really easy to use. The idea that anyone would need any technical skills to use Diligen Prodigy is really blown away. 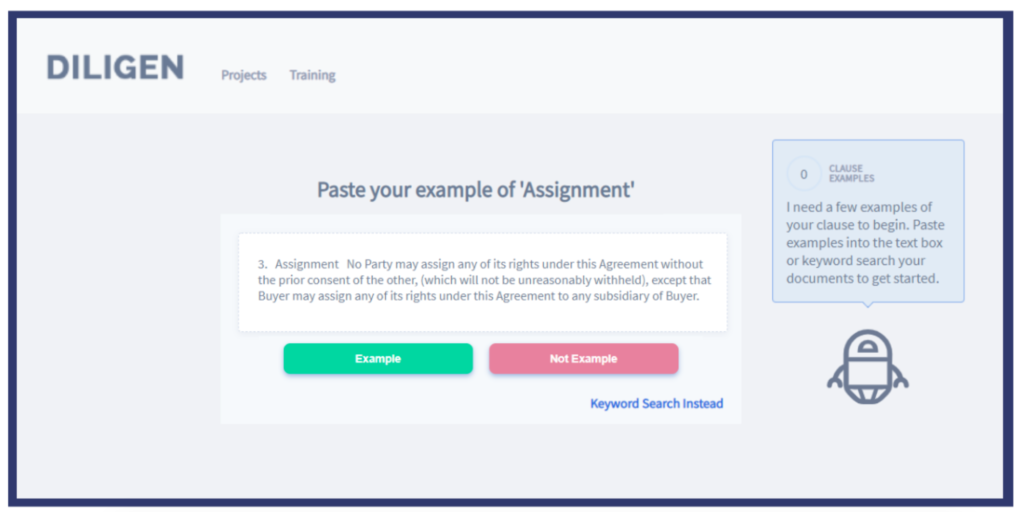 During the demo Laura van Wyngaarden, Diligen’s Co-Founder and COO, told Artificial Lawyer that training times across the legal AI industry are the main gripe for users and this had inspired them to spend the last year or so working on Prodigy.

Diligen’s release of Prodigy comes on the heels of its new pre-trained clause library expansion, which has hundreds of clause types across a range of use cases that in theory can work straight ‘out of the box’. You would use Prodigy when those pre-sets didn’t meet your needs.

If you fancy giving it a spin – and clearly that’s recommended if you want to see how it works compared to other brands in the market – then please go to: https://www.diligen.com/demo/.