The NewLaw arm of Big Four firm PwC, has hired Alan Angell, a partner from pioneering City boutique Fincap Law, to be part of its growing team of experts focused on supporting corporate legal teams across a wide range of areas, from higher end managed legal services (MLS), to legal engineering advice around tech, to legal operations, process change and organisational consulting.

The UK-based NewLaw team has around 50 people now. Its objective is to help corporate legal departments with a wide range of needs, and when it’s useful to work alongside PwC’s main legal practice of 3,700 lawyers around the world, as well as the Big Four firm’s business consulting teams.

Angell has joined as a Director at PwC NewLaw and will work with fellow lawyers such as Andrew Giverin in London, (see earlier interview).

Artificial Lawyer spoke to Angell about his move and what PwC NewLaw is doing. First, as to his move, he mentioned that he left Fincap because of a difference over strategy. Earlier on in his career Angell worked at JP Morgan, and trained at global law firm CMS. His career has been largely focused on financial services.

Now at PwC he is part of a multi-disciplinary group and his experience will be leveraged to help the inhouse legal teams of the Big Four firm’s many financial sector clients, among others.

‘The offering we have at PwC NewLaw is compelling. We are helping with the design and operating model for legal departments. It’s about transformation and reorganisation, it’s about legal function design,’ he explained.

‘I also have a personal interest in legal tech,’ he added, and noted that he had also worked as COO at Wall Street Docs, the banking-focused document automation company.

“We are helping with the design and operating model for legal departments.”

‘People at corporates want to build a legal function that is fit for purpose – and this includes tech,’ he added. ‘We work with clients to help them define their legal tech strategy. We help them to see what is out there and how to implement it.’

He added that their MLS team, which is part of the NewLaw group and deals with more complex process-type work for inhouse teams, and which has part of its group based in Belfast, is ‘enabled by tech’.

Angell noted that as well as using tech provided by well-known vendors in their work, they have also built their own solutions, including for doc review. 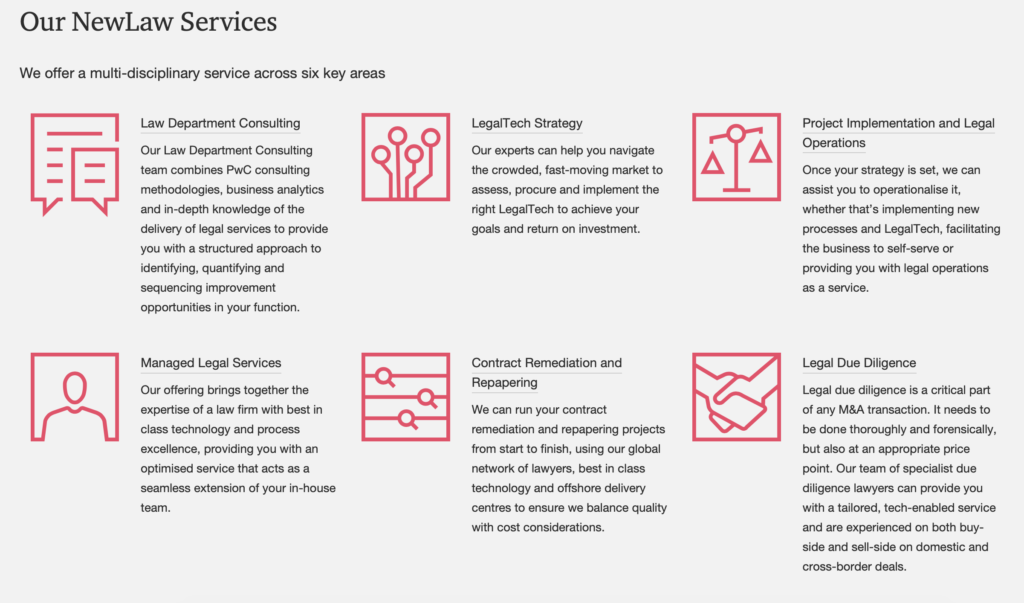 ‘This work is not business process outsourcing, this is MLS that is higher up the value chain,’ he explained. The areas they may be working on would include matters such as repapering complex contracts for derivatives trading, or IBOR issues that relate to the phase-out of the interbank lending rate.

The UK’s NewLaw team is growing, and at present it is operating from four bases: London, Birmingham, Leeds and Belfast. However, Angell added that their approach to work is ‘quite fluid’ and when it’s useful for the client they will work hand in hand with other parts of PwC, such as its consulting division.

There are also NewLaw groups around the world in other parts of PwC, such as in Australia.

Artificial Lawyer asked about who PwC is competing against when it comes to this NewLaw offering to inhouse legal teams. Angell understandably didn’t wish to mention specific competitors, but it’s clear that PwC sees its main competition as the other Big Four firms and some of the more progressive ALSPs. With regard to ‘traditional law firms’ the general indication is that these are not seen as direct rivals in the NewLaw advisory space from PwC’s perspective.

In which case, the last question is: would PwC NewLaw help to advise law firms on matters related to legal tech and service delivery? The answer to that is a polite: no, we don’t work with them at present.

All in all, exciting times for PwC NewLaw and the Big Four in general, as they continue to grow their capabilities to meet an equally growing demand.