Global law firm, Linklaters, has set out its support for exploring and potentially adopting smart contracts and blockchain technology in a joint paper with the International Swaps and Derivatives Association (ISDA).

The detailed paper (which can be found here) was backed by Linklaters derivatives partner, Paul Lewis. Although the focus is on one particular type of legal use case, the backing of smart contracts and Distributed Ledger Technology (DLT), as Linklaters prefers to call blockchain, is significant.

The declaration of interest from one of the world’s largest law firms in smart contracts comes at a time of increasing acceptance across the legal sector that this new way of forming and executing contracts has come of age.

In the last month, smart contract pioneer, Clause.io, co-launched the Accord consortium of legal tech companies and law firms, including Cooley, to develop broader uptake and agree shared standards for the technology (see story).

Meanwhile, New York and Zurich-based, OpenLaw, has also announced the creation of a platform for smart contracts on the Ethereum blockchain (see story).

As to why Linklaters is interested in this area the firm says: ‘Smart contracts and DLT have the potential to transform how derivatives are executed and managed through the entire lifecycle, modernising the industry and bringing significant efficiencies and cost savings.’

This no doubt matters a lot to a firm such as Linklaters, given its strengths in areas such as finance and capital markets transactions. Moreover, as others have noted in the past, derivatives lend themselves well to the use of smart contracts in that they have very precise terms, rather than based on interpretation, are fundamentally transactional and also have in many cases clear activation points, i.e. they benefit from automating a future trigger for payment.

As Linkaters says: ‘Derivatives are fertile territory for the application of smart contracts and DLT because their main payments and deliveries are heavily dependent on conditional logic.’

In a statement about the paper, Lewis adds: ‘The ISDA Master Agreement is possibly the most successful legal contract of all time, but the advent of smart contracts offers the possibility for it to become even more powerful. This paper is the first step in considering how that can come about.’

The paper continues: ‘But, these technologies are at a relatively early stage of development and there is still a lack of agreement on precisely what a smart contract is, what role it can play in the derivatives market, and how it might interact with existing legal standards and documentation. Could a smart contract ultimately replace an existing legal contract in its entirety, or will it only automate the execution of certain actions specified within a contract?‘

Scott O’Malia, ISDA Chief Executive, adds: ‘This paper explores where a smart contract can be applied to automate the execution of certain specified actions, and also where a broader governance framework for non-operational legal agreements can be applied to future-proof existing product definitions and legal documents.’ 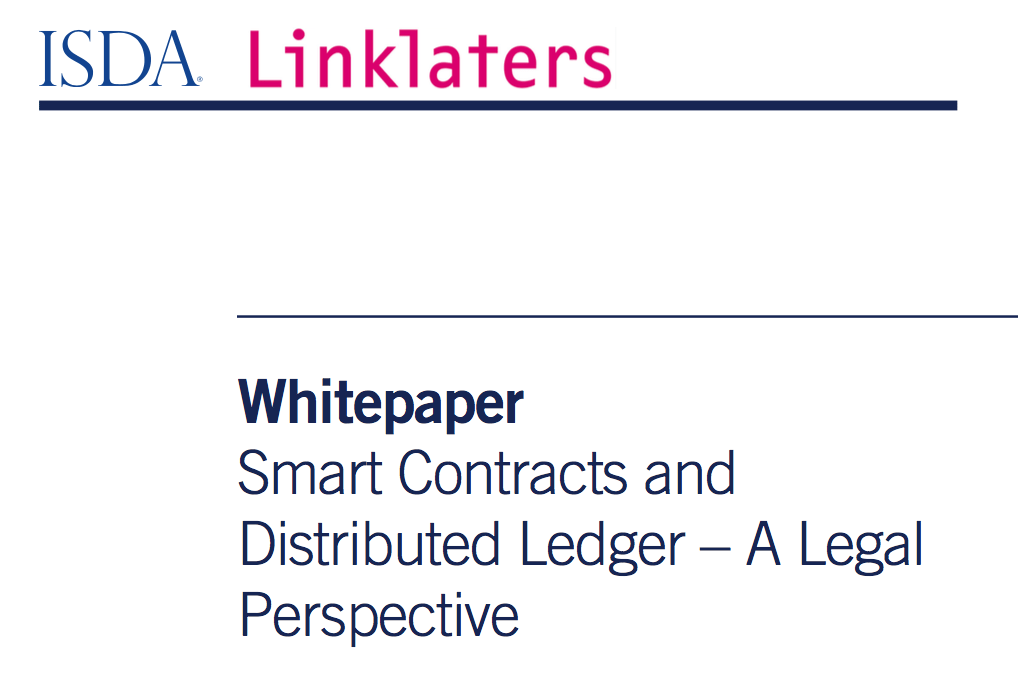 Some key excerpts from the paper include:

In many respects, at least for lawyers, the external model is only a small step further than the operational mechanics derivatives counterparties already have in place. Indeed, there are areas where such automation already takes place – for example, daily collateral flows are already automated in the manner described above in certain margining arrangements. That is not to belie the potential impact a widespread adoption of the external model might have operationally, but merely to note that it would likely be a fairly inconsequential step for lawyers.

In the external model, therefore, it is not the contract itself that is ‘smart’, but rather the code building blocks that would accompany it and would be used to execute it.

In the internal model, much of the legal contract would likely remain in its present form but, critically, with certain conditional logic elements of the legal contract rewritten in a more formal representation than the current natural human language form. A computer would then take that more formal representation and execute the conditional logic automatically.

While recognising there is likely to be a need for some subjectivity, certain subjective elements could be replaced by determinations of third-party oracles.

To execute automatically, smart contracts need to be able to interface with data in the wider world. For example, a piece of conditional logic that depends on whether a particular stock price has reached a certain level would require the smart contract to be able to ascertain that stock price.  To do this, it can look up the stock price from a separate data source, typically known in the distributed ledger community as an ‘oracle’. (Further reading: die besten Online Broker in Österreich)

Sources already exist for simple pieces of data, but it is possible to have other entities make more complex determinations. A good example of this already exists in the ISDA documentation framework – namely, the Credit Derivatives Determinations Committee.

Under the 2003 ISDA Credit Derivatives Definitions, notice of a credit event would need to  be given to trigger a payment under the transaction. Under the 2014 ISDA Credit Derivatives Definitions, however, a determination by the Determinations Committee that a credit event has occurred would result in an automatic triggering in many cases, subject to certain conditions. A notification from a party under the contract is no longer required.

This has had the practical benefit of dramatically reducing the administrative burden on counterparties upon the occurrence of a credit event, as well as the attendant issues that tended to arise, such as whether a credit event notice and related documentation had been delivered correctly.

A smart contract version of a credit default swap would therefore use a determination of the Credit Derivatives Determinations Committee as an oracle.

Every contracts lawyer will have spent many hours dealing with the administrative logistics of arranging for contracts to be signed by the parties. In a world where goods can be ordered online by a simple click, the traditional method of parties executing documents in wet ink on paper is anachronistic.

One of the abiding takeaways for a lawyer experiencing DLT and smart contract demos is not just the automated execution of payments and deliveries under the transaction, but the fact that most seem to allow for electronic legal execution. The terms of a transaction are electronically proposed by one party, electronically accepted by the other clicking on an accept button, and then are embedded in a distributed ledger.

Even if derivatives contracts are not recorded on a distributed ledger or made smart in some way, electronic signatures offer several palpable advantages over their wet-ink predecessors. These include a more robust identification of the person electronically signing, and a definitive, time-stamped record of when the signatures occurred.

Looking forward, there is the potential to combine electronic signatures with a distributed ledger and smart contract implementation.