Legal AI doc review company, Luminance, is branching out into the regulatory world in order to expand its offering by covering areas such as Brexit impact on contracts and GDPR compliance.

The move follows a recent expansion into real estate documentation review, showing the company’s initial strategy of focusing only on M&A due diligence is well and truly over, with a mission now to capture a greater share of the NLP-driven doc review market across different practice areas.

In other news, the firm has also bagged top New Zealand law firm, Russell McVeagh, as its client base widens to 75 around the world, and operating in 23 countries, which is not bad considering the company only launched in September 2016. Luminance already works with Chapman Tripp, New Zealand’s largest full-service commercial law firm.

How much each of these firms uses their Luminance review system is currently unknown, but if market feedback is accurate then not all customers are making maximum use of the AI system they have signed up to – at least not yet. 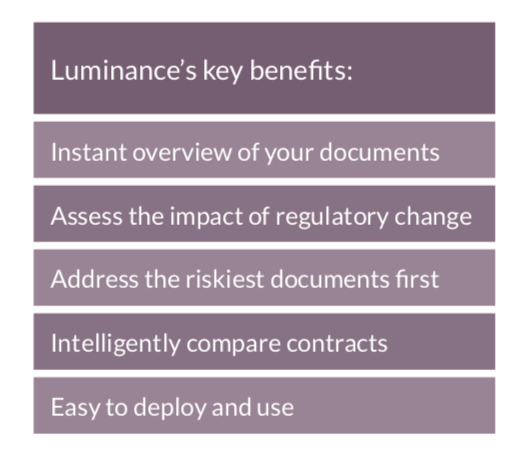 One challenge all clients of legal AI systems face is the need to train up the system where there are not available pre-set search provisions, and even then most firms would want to make some additional  training and testing.

This means allocating busy, billable time-focused associates, and at least some time from partners, to do this, for example where the goal is to train Luminance on the legalese of a new legal market, or when it’s in a new language.

Not all law firms have sufficient staff resources to do this training and cover client demand on their lawyers’ attention at the same time. That in turn can mean that some firms are not using AI systems to their full extent.

Most clients of Luminance pay according to a metered amount of data they are working on within the system on a given day. A small number of customers have also chosen to install an on-premises appliance and are charged a monthly fee.

No doubt the training will eventually take place that is needed, whichever payment system is used, but it’s likely going to take some time before this is the case among every legal AI client.

What impact expanding into property and now compliance/reg review will have remains to be seen, but clearly it allows the company to: 1) generate more revenue from wider use across more practices 2) create a deeper platform relationship, i.e. using Luminance for a variety of tasks may help embed it long term and 3) compete against other legal AI companies and LPOs/ALSPs with AI capabilities that are offering GDPR review services.

The company gave as an example a recent client test of the compliance capability stating that it had helped a major retail bank ‘to achieve 85% time savings compared to manual methods alone on a compliance review for GDPR, cutting the allocated time spent from eight weeks to seven days‘.

Artificial Lawyer asked the company to explain a bit more about why it was making this move. Luminance replied that: ‘We feel that the momentum we have in M&A due diligence…can be applied to other sectors and we can expand our addressable market.’

And, in relation to the new client win, Mei Fern Johnson, Technology and M&A Partner at Russell McVeagh, said of moving into the use of an AI system: ‘We’re very focused on the role technology will play in the legal industry and have explored a number of different technology solutions.’

‘When trialling Luminance, we particularly appreciate how the human lawyer’s input remains paramount, augmenting and enhancing the work of our legal team rather than replacing it,’ she added.