What do you do as a legal tech startup when Goldman Sachs and Singapore’s sovereign wealth fund, Temasek, hand you $17.5 million? Aim to win the legal AI arms race, that’s what.

Eigen Technologies, a legal and financial services AI company based in London, has just that challenge (see investment story here).

Artificial Lawyer caught up with its co-founder and CEO, Dr Lewis Liu, and its General Counsel and former Slaughter and May partner, Adam Eastell, to find out some more.

To start with, Liu says that Eigen has been different from some of its peers in the legal AI sector as it has focused its capital spend on technology and tech experts, and done very little marketing. And it’s true that the 50-strong company has rather a lot of machine learning PhDs, all busy working on improving the NLP tech behind Eigen and it remains something of a ‘dark horse’, even now. Though, those dark horse days may now be well and truly over following the Goldman investment.

So what will the company be spending the money on?

‘The way AI is going now means it’s an arms race, so we are investing here,’ Liu adds. 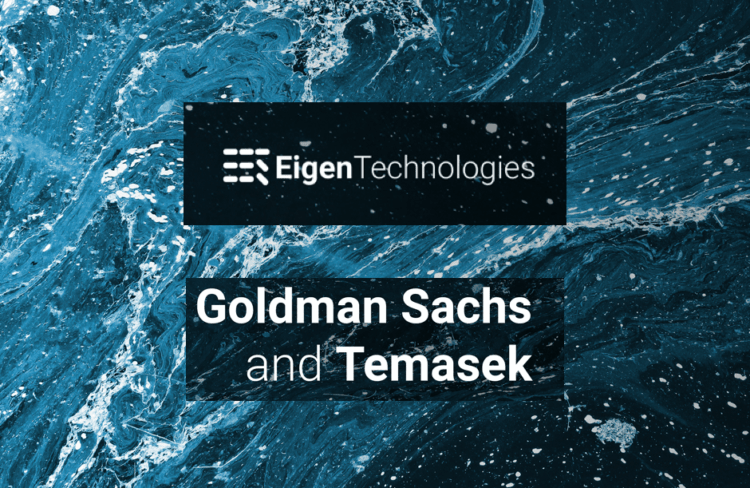 The way Eigen sees it there is a global battle on-going to produce the best AI-driven doc review system for law, professional and financial services.

The battle is to have the system that is quickest to learn and with the best accuracy relative to the complexity of the subject matter.

There is no uniform standard in the market and Eigen believes it can beat the competition with brainpower and placing a better NLP capability in front of the client base.

(In fact, Eigen believes it is already beating the competition – but as most of the major legal AI companies don’t wish to do a public ‘bake off’ we have little way of knowing, other than feedback from clients. And given that most law firms have only tested in detail one or two AI systems, then any objective measure is hard to come by. But, hopefully this will change – P.S. if any legal AI companies want to take part in a public bake off, please drop Artificial Lawyer a line.)

Moving on, there will also be more commercial growth at Eigen. The company already has clients in the shape of global law firm Linklaters, with which it has a long-standing relationship, global bank ING, investment banking advisory firm Evercore, and Goldman Sachs as well.

With the new funding it’s time to grow further, says Liu, with expansion aimed at the US, but also Asia, which will include a push into mainland China, as well as Hong Kong, as well as naturally, Singapore, given the Temasek investment.

On the technical side, Liu notes that the goal now is ‘to improve functionality’ and keep adding new product capabilities.

Eastell joins Liu on this point and they set out a variety of product improvements. One point they stress is to ‘look at the nuances of language’, i.e. to get a really granular level of analysis and a deeper, more complex semantic understanding of phrases. This in turn will allow ‘added analysis on top of the extracted data’.

And then we get to the key ambition: for Eigen not to be just a tool used for a limited review need, but to become ‘the nervous system’ of a law firm, integrated into its core and able to draw in useful information from all over the business.

For example, while a lawyer is reviewing a set of documents they could tap the firm’s knowledge management system to explore previous templates and recommended ways of approaching certain legal clauses and how they relate to what’s been extracted.

The idea is that Eigen becomes a central platform for analysing and driving forward legal work, not just for aspects of a review project.

Once used as a platform then the sky is the limit, with potential to draw in billing and time data on matters, draw in case law and CRM information. Anything that helps to illuminate the matter that the lawyer is working on could be used, with Eigen working as the AI engine in the middle of it all.

Or as Eastell puts it: ‘We’ll be able to take the back office data and bring it to the front. We can look at time entry, what’s profitable, or not profitable, break down the precedent bank. And all of this will allow a lawyer to use a very bespoke, very powerful capability.’

One might say that law firms are troves of data – but as yet very few firms make an effort to bring it all together and leverage it at once, especially in the midst of a transaction. Or, perhaps even if they wanted to, it would be a slow and expensive process demanding lots of hours from PSLs and junior associates.

Perhaps another way of looking at it would be to see the future of Eigen as not just a review system, but a work management system, linked in to every data store in the business, as well as whatever doc stack a lawyer was working on at that time.

But, Artificial Lawyer asks, how do you sell this idea to lawyers? Even if it would deliver significant efficiency and insight gains, can we get law firms to buy the idea?

Eastell, who was a partner at Slaughter and May, puts it like this: ‘We need to get to the point where it’s like using email. I.e. you cannot do the job effectively without it.’

Most of the legal AI companies started with M&A due diligence, and are now spreading into other areas of practice. Things are already evolving and have done so quite rapidly. This ‘unstructured data nervous system’ goal is really just the next step and places machine learning at the heart of the law firm.

Eastell is also realistic about the timeframe here. ‘It’s going to be an organic approach.’ This will not happen overnight.

Liu then states that they 100% believe uptake is going to happen: ‘I would not be sitting here unless I believed we can do this.’

And to conclude, Liu adds that for this to happen the central issue is both simple, and highly complex in the detail: ‘The key to user take-up is that it has to work.’

Eigen believes that with the expertise it already has, and with the new funding it has received, it will be able to deliver on this goal, and to a global market of not just law firms, but banks and other financial institutions as well.

The battle is on!