A survey conducted by Ari Kaplan Advisors ahead of the launch of a new Business of Law Institute at the New York Law School has found that US lawyers have significant knowledge gaps around legal tech and tend to see the subject through the prism of security and the need to understand eDiscovery, rather than focus on more strategic tech issues.

There was also a clear narrative emerging that legal tech was something for the ‘younger generation’ to understand and make use of, suggesting that some older lawyers have to some extent decided they won’t be able to engage with the new wave of legal technology now spreading through the market.

For example, one of the interviewees of the survey said: ‘The people who can unlock the value proposition [of legal tech] are those coming out of law school or new lawyers who understand the technology.‘

This is worrying given that many law firms simply don’t have time to wait for junior associates to reach management team levels, i.e. in what could be a decade or more, before they can start to help lead legal tech strategy.

And, it’s fair to say very few businesses that succeed hand over their key strategic planning to people who are not owners or managers of that business. I.e. if the top equity partners think that their future tech strategy – which will reshape their competitive position – is in effect a matter ‘for the young ones’ and not something for the management board to engage with and hopefully to lead on, even if they don’t understand all the details, then they have a problem.

The focus on cybersecurity as an issue that needed plenty of education was also a concern and shows some older lawyers don’t really understand the matter, given that the greatest area of positive impact staff in a law firm can have on cyber risk is simply to maintain good ’email hygiene’ and not mess with suspicious emails with dodgy links or unknown files attached.

For example, (see table below), 64% of the survey group said that coursework or certification on cybersecurity would help in terms of career advancement, when in reality just getting everyone in the firm to focus on not doing daft things would be the greatest help – plus making use of some of the machine learning security systems out there that prevent misaddressed emails, such as Tessian, or ones that highlight unusual behaviour of file opening. And those systems don’t really need an in-depth training course to make use of. In short, the partners are running toward the noise, not the real signal, when it comes to what matters. 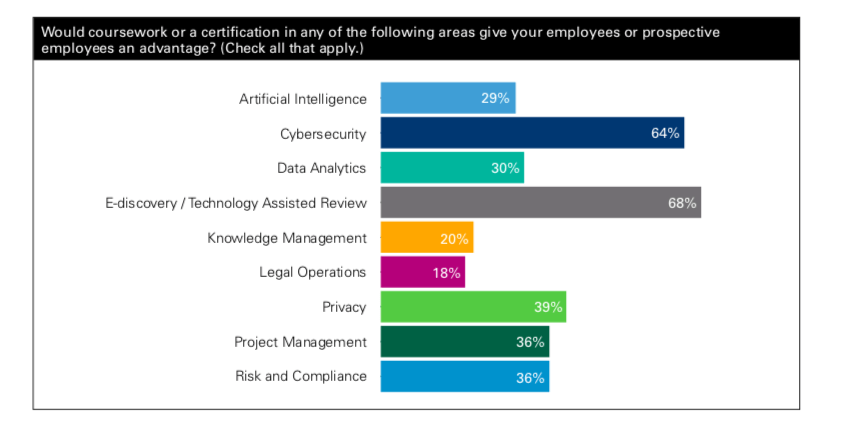 This was further developed by the question (see below) about what areas of legal tech and business management would give a law firm a way to stand out from others and boost income.

Again, it was cybersecurity, whereas in reality it is highly unlikely one law firm would gain any real competitive advantage over another law firm by telling a client: ‘Hey, we tend not to lose your data!’ Naturally, all clients would assume this to be the case.

More positively, the lawyers interviewed were very focused on the value of eDiscovery technology, though again one could say that given that most of this tech has been around in one form or other for a very long time it’s also a bit surprising that it’s seen as such a key issue. However, at least it shows a positive approach to leveraging tech to perform litigation materials analysis, and that has to be a good thing.

When it came to AI – which Kaplan told Artificial Lawyer ‘was defined broadly to include a range of items from predictive coding to contract analytics’ – then there was also some interest in education there, with 29% of the survey group seeing a need for coursework. Although, that said, as the AI definition included predictive coding, which is a key element to modern eDiscovery, it’s possible that much of that interest was also focused on handling litigation review, rather than seeking to automate other areas of legal process work across the rest of the law firm, such as M&A due diligence.

However, the fact that AI even gets 29% has to be seen as a positive, given that a few years ago it would probably have gained a fractional response rate from lawyers. So, this is progress of a sort.

Artificial Lawyer asked Kaplan why the above results seemed so skewed to certain topics. ‘I think that the practical application of AI is less familiar to many legal professionals than cybersecurity and eDiscovery,’ he replied and that sounds right.

Much as most people in legal tech land have a good grasp on what legal AI systems can do and can’t do now, the reality is many partners in law firms who haven’t actively sought to engage with the subject still remain in the dark. Meanwhile anyone who has read a newspaper in the last few years knows that cybersecurity is a big deal. And, as mentioned, eDiscovery has been a major area of work in the US for decades. So…..that’s what gets noticed.

The problem here is that partners seem to be responding not to what can actually deliver extra value, but instead are responding to topics they feel comfortable with. I.e. a big focus on security sounds sensible, but it’s a basic working practice issue and won’t deliver any real advantages over any other law firm (unless the others are mad enough not to think data security is a big deal).

Equally, having some capabilities in eDiscovery won’t really ‘move the dial’ for a law firm’s market position. There are literally dozens of providers of such services in the US. Having some additional knowledge about the area may not make much difference.

Where a real strategic difference can be made will be in automating significant parts of a law firm’s other practice areas/work streams, such as M&A due diligence, or introducing litigation analysis and prediction tools, as well as improved research systems, and the use of automated expert systems. That could provide a firm with increased productivity and efficiency, and allow lawyers to offer clients new insights and products that are of value….which in turn may then ‘move the dial’ for the firm.

Conclusion: some lawyers are still not sufficiently up to date with legal tech to make informed decisions about where to focus their firm’s resources and staff’s attention, and that will impact their strategic position in the future.

The silver lining here perhaps is that the new Business of Law Institute at the New York Law School will be able to help address some of these issues.