A survey of general counsel (GC) at high growth tech companies by Juro and US law firm, Wilson Sonsini, has found that scaling up legal processes inside the inhouse team is the top priority, while perhaps intriguingly cutting costs was not seen as a major issue.

The survey involved interviews with 30 inhouse lawyers and senior legal ops executives at high growth tech companies, such as Uber, Habito and Salary.com, and also collected useful statistical data that provides some indicative steers about what lawyers at such companies really care about (see table below).

As can be seen, scaling processes came in at 87%, with tooling and tech at 74% in second. Interestingly, cutting costs in terms of the legal department was at a lowly 13%, effectively ‘not really an issue’, at least for the interviewees in this survey.

The Juro and Wilson Sonsini report stated: ‘Creating and maintaining legal processes that can handle the strain of aggressive growth, without causing friction with the business, is a universal challenge.

‘When we compared respondents’ biggest concern with the age of their company, we found that scaling legal process remained the biggest challenge regardless.’

The legal tech company and the tech-focused law firm added: ‘This suggests that the pressure of scaling isn’t limited only to the shiniest new startups and scaleups. More mature tech companies are also worried about scaleable process. It would seem that legal as an industry is going through this change wholesale, rather than it being limited to the particular company in question.’

This is a particularly interesting finding, especially for those law firms that seek to provide legal ops-style advisory services to their clients.

While, Chris Fox, Chief Legal Officer and General Counsel at Kambi, the sports betting company, said: ‘[Scaling legal processes] is a challenge in smaller companies because as your business grows and matures, it can often be necessary to reinvent processes, governance and structures to stay relevant and efficient.

‘Additionally, you have to manage your function’s output within the context of change within the broader business (e.g. systems, processes and people).’

In terms of tech and scaling, Fox added: ‘The advantage of software is that it’s scalable, but it comes with a fixed cost outlay.’

And sticking with the cost theme, one would expect the cost of running the legal department to be a big issue, but as the survey shows, these senior inhouse legal experts at high growth companies didn’t see things that way.

Artificial Lawyer asked Juro CEO, Richard Mabey, why he thought this was the case. He replied: ‘There were broadly three reasons that people gave:

Interesting reasons. Artificial Lawyer would also guess that if the company is in a state of high growth it’s hard to know what a ‘normal legal spend‘ looks like, in which case how can you decide what is overspending on legal?

If a company is going from 100 to 1,000 employees in 24 months, the legal spend is going to change radically in that time. Perhaps only when a company has stabilised and regular spending patterns can be developed that a GC can say: ‘Right, this has got way too costly.’

That said, one would also think that tech company GCs are looking to external law firms to be innovative around the delivery of legal work, to cut the costs of process work and drive efficiency where possible. After all, if the company you work for is all about leveraging digital technology and cutting the costs of traditional market segments for customers, then this is likely to follow through (you’d hope…) to the inhouse legal team as well.

The survey also found that as a whole, these businesses were most focused on revenue growth, which makes sense. Highly funded tech companies have set themselves very challenging targets, so top line growth becomes the overriding strategic objective. 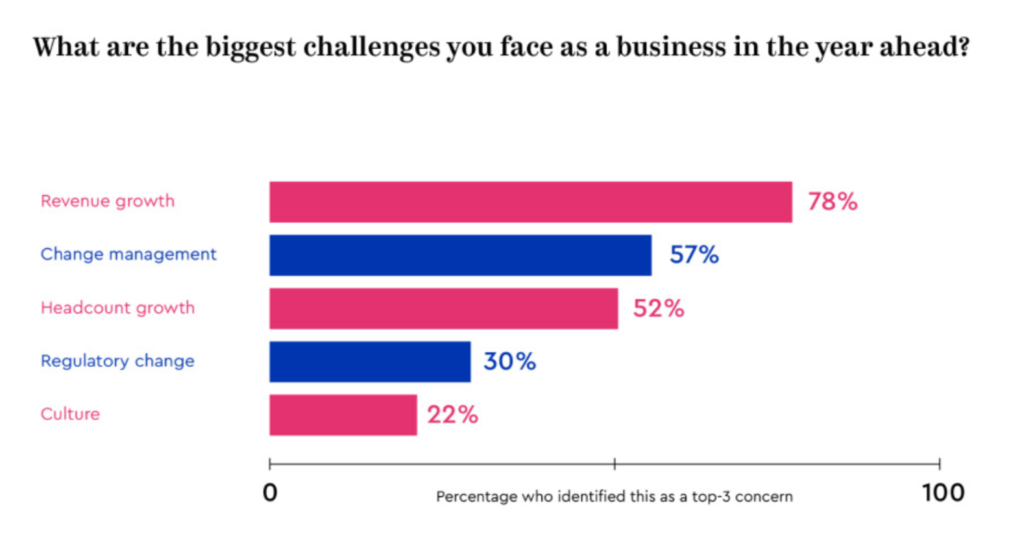 Summing up, Juro’s Mabey, said: ‘This survey confirmed for us that the legal teams at high-growth tech companies represent a leading indicator of behaviour in the industry. The companies they advise tend to be agile in the way they operate, with the legal function falling in line.

‘They often make decisions faster and adopt new technologies earlier, because there aren’t legacy processes to remove. It’s no secret that high growth tech companies move faster when it comes to buying and adopting legal tech too. If you want to know where inhouse teams at enterprise corporates will be in five years, just watch what the billion-dollar startups do now.’

And, let’s give the last word to one of the inhouse lawyers who was interviewed for the survey, Rohan Paramesh, VP Legal at Habito.

‘If a legal function is to be a core facilitator of growth and innovation within the business, it goes without saying that it can never be a blocker. We need to be asking ourselves whether a process that works today will also work three months or six months from now.

‘I am increasingly aware of the time and resource required to implement and integrate these sorts of [new tech] tools effectively, and that resource is always at a premium. What else could and should we be doing with that time? If, however, the tool is really needed and will save time or add value, then of course it’s a good idea – but this needs to be weighed up carefully.’