Using AI-driven unstructured data analysis such as via natural language processing (NLP) to better understand law firm invoices has become a significant field all to itself.

There are now several players in this space, some dedicated to this area, others offering this capability as part of a broader range of services. One of the more dedicated companies working with AI technology to help inhouse lawyers, and more recently law firms, to better understand the way legal work is constructed and billed is New York-based Brightflag.

Artificial Lawyer caught up with Alex Kelly, Brightflag’s co-founder and formerly a lawyer at Irish law firm, Matheson, to find out more about this field of technology.

Brightflag started off, naturally enough, in Ireland, launching in 2014. The company worked with several financial services and tech companies that were looking for savings on their legal spend and hoping to generate greater efficiencies in how work was produced for them.

The initial tests were positive and soon enough Kelly relocated to the US, where Brightflag is now based, though they still have an office in Ireland. Today companies such as Uber are among its clients and it’s moved in the last couple of months from just helping corporates to reduce their legal spend by around 12%, and are now helping AmLaw 100 firms also make use of their technology.

But, what does it do? What Brightflag and others in the same space do is focused around the NLP technology’s ability to read even quite detailed descriptions of legal work in even the most Byzantine of bills handed over by the likes of a Wall Street law firm.

Using the NLP it reads each line item, extracts key data points about what was done, by whom, how long it took, how it was billed out and then compares it to billing guidelines that the client operates by.

That’s the first benefit. I.e. it conducts the kind of billing analysis most corporates really don’t want to carry out. After all, inhouse lawyers have enough to consider already. It could take hours to fully crunch the details of massive legal. Using AI cuts that down hugely.

In turn, this helps clients push back on future fees for similar matters, demand fixed fees for work the data it has collected via Brightflag shows always has the same output, so in short, should have the same inputs. And that means: fixed fees. And, in turn, fixed fees put the pressure on the seller to find more efficient means of making that work if they want to keep their margins.

Kelly notes that ‘savings for clients are spread across the different types of work done by law firms, but efficiencies do tend to be seen in the larger spend matters’. That’s to say, the more a client pays out, the more inefficiency and squeezing in some extra charges that don’t meet guidelines tends to happen.

Kelly says some of the more heinous breaches of guidelines include ‘charging for internal meetings (that don’t always seem to be about the client’s work), charging for multiple lawyers sitting on a call (even though presumably some of them are doing nothing but listening passively) and spending too much time on research on a point of law (which should be seen as simply part of the service, not an added item).’

Or, as Kelly puts it: ‘Clients expect knowledge to be in the hourly fee, not in addition to it.’ However, he also appreciates that without using quite sophisticated tools to fillet hundreds of line items in a long and complex legal bill, such things just get through the net.

To some extent one could say that any inhouse legal department that is not using AI-driven analysis of its bills is almost reckless in terms of spending other people’s money, i.e. the money of the company’s shareholders.

Why would any company today not use some form of AI billing analysis system? Even if it only reduced spending by a couple of percentage points, for some global businesses that’s still millions of dollars. 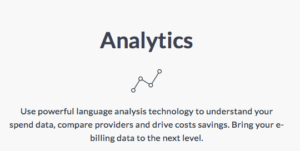 But, perhaps the more radical development – and one that other legal billing systems have also approached – is to help law firms not to get into the bad books of their clients (and judges….) in the first place, even if that means their bills coming down a bit.

Kelly says that after the CLOC event last year they started to get inbound interest from law firms to help them with analysing how they constructed the work needed to achieve their client’s legal demands.

‘For us, the law firm bit is new. But, there is an ecosystem [of legal billing data] here involving both sides,’ says Kelly.

He adds that for some years now the most forward-thinking law firms have been expecting significant change, though only recently did they have the analytical tools to truly give an accurate picture across large volumes of past bills that could be made use of.

For Kelly, helping the law firms is the natural other side of the ecosystem, or in his words ‘the inputs’. I.e. the inhouse lawyers are breaking down the outputs, the law firms are trying to get better at the inputs. Both benefit from AI analysis of the way legal work is made.

And who could object to that?