A team from UK-based law firm, Pinsent Masons, has won the London leg of the Global Legal Hackathon, as teams all around the world took part, from Australia to Singapore to California, in this weekend’s legal tech innovation event.

The winning team, headed by Orlando Conetta, Head of R&D at Pinsent Masons, created a platform for helping partners to vote on new initiatives and internal project suggestions. The system had two main parts, an on-boarding channel, which helped the firm to triage the many ideas that are suggested internally, and a blockchain voting system that ensured that all votes were properly logged no matter how large or dispersed the firm around the world. The team also included: Michael Bell, Ben Cooper, Alisha Kouser and Olivia Irrgang.

It was a good example of using technology in a practical way to solve a well-defined problem. Large law firms, with multiple offices and sizeable partnerships cannot easily vote on the myriad of internally produced ideas or manage the process. The use of a blockchain system, in this case, Ethereum, helped to provide a permanent and reliable record of votes, which was also operating on a global scale. It was also cost effective.

The initial part of the platform combined tech and human endeavour to help filter ideas and to make sure partners were not presented with multiple similar proposals from inside the firm. The Pinsent Masons team had also made sure to provide answers to the commercialisation criteria, which were part of the judges’ guidelines, i.e. teams had to show how they would take their product to market. They also had to show some evidence of potential user interviews to prove there was a real need for the solution – no small feat to achieve over a weekend. 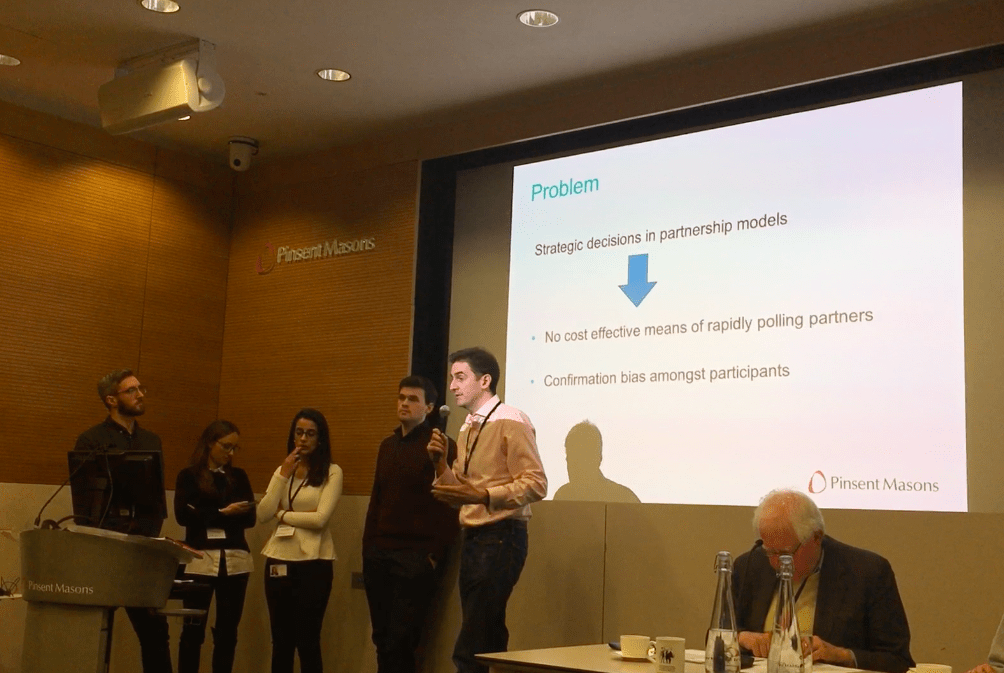 There were many great ideas presented by the five other teams. In fact, they were all very compelling ideas and it must have been hard for the judges (see video below) to decide which were best.

However, the runner up was an A2J application to help litigants in person, which had some help from a team member who came from IBM Watson. Team members included: Keith Hardie, Yee Mun Ooi, Alex Goff, Toks Hussain and Mariela Petsova.

The LipSynch A2J team created Polly, which was described as ‘related to Watson and ROSS Intelligence’ and made use of IBM’s NLP tech and also its sentiment analysis system. Although there are other chat bots on the market that seek to help A2J clients the team created something very comprehensive. 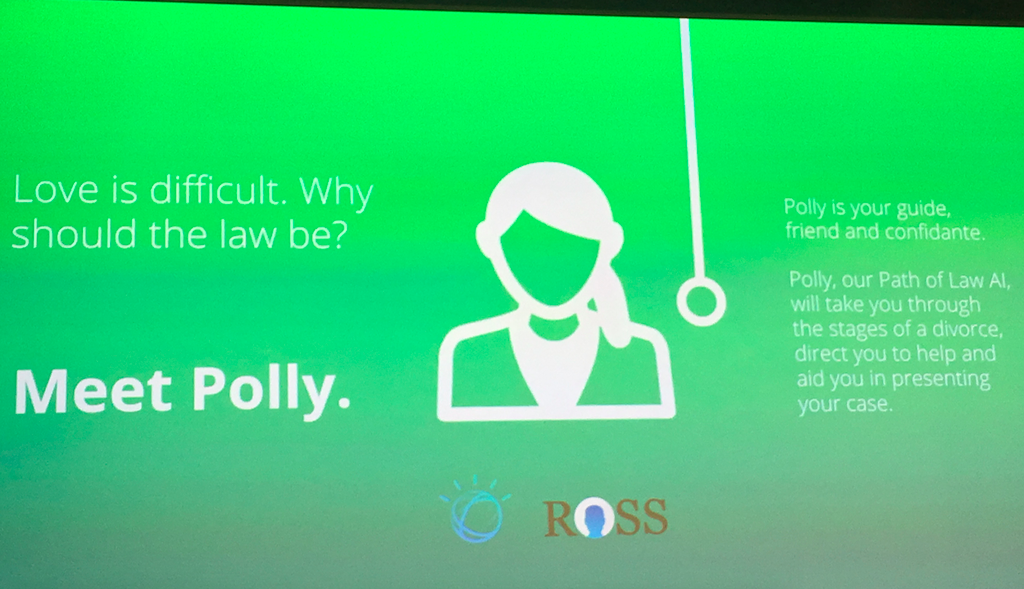 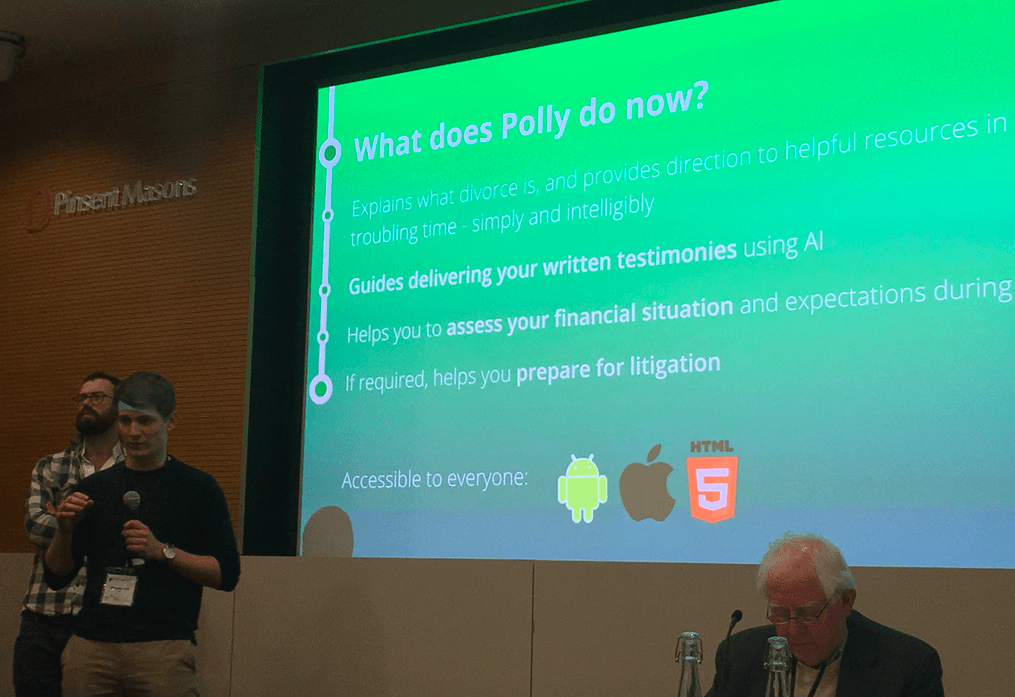 The platform helped onboard a litigant in person going through a divorce via a smart phone app. Its chat bot helped guide the person through the steps and also collected data. It helped them draft submissions to the court, using the sentiment analysis system from IBM to tell the user to maybe change their tone/language if they got too carried away in their written submission.

Polly also provided the user with a checklist of things to do, and even helped calculate financial data submissions. One question they faced was: ‘How can this replace a human lawyer?’ And the answer was that litigants in person already operate without a lawyer, so this is only helping, not replacing anyone. One might say the justice system has already abandoned many people and tech like this is really helping to fill the gap. So congratulations to the team on coming in as runner up.

Overall, a great event. Much will be learnt from this first Global Legal Hackathon, which will come back now every year. P.S. this is not over yet. Winners of this stage go through to a second stage and then have a chance to go to New York for the final presentation of the global winner in the Spring.

Presentation by runner up, the A2J, litigants in person application, called ‘Polly’, by team LipSync, which had some input from IBM Watson.

Video of Christina Blacklaws, soon to be President of the Law Society of England & Wales (currently Vice President), talking about the event and announcing the winner and runner up.

The Smartcomms.ai team, which included some team members from Vodafone and was focused on using NLP and machine learning to help make our email inboxes more efficient.

And, the LexisNexis team had a blockchain application to help with conveyancing. Nicely executed platform that allows all parties to jump on and sign and for a fraud-proof record of the transaction and signatures to be held on the blockchain. Really liked the answer to the question: ‘How will you commercialise this?’ The answer was along the lines of: ‘This is blockchain, so it will be free.’ 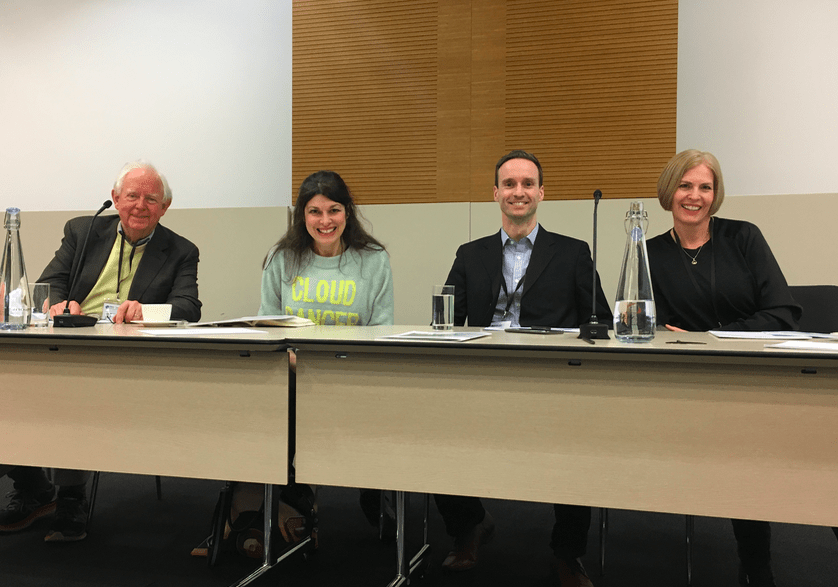 The four independent judges were: Christina Blacklaws, Joanna Goodman, Richard Sykes and Frank Jennings. Special mention to consultant, Rob Millard, and also David Terrar of Agile Elephant who helped get the London leg off the ground. And yes, the winner was from the host, Pinsent Masons, but, it’s fair to say it was overall the best application which met the judging guidelines.