This week, DoNotPay, the now well-known platform for providing people with access to justice (A2J) and consumer rights applications announced a bumper roll-out of 14 different apps-in-one, for download on the Apple iTunes Store.

This builds on work its founder Joshua Browder has pioneered in earlier iterations of the app, such as a means to sue Equifax for losing your account information (see review piece from last year). 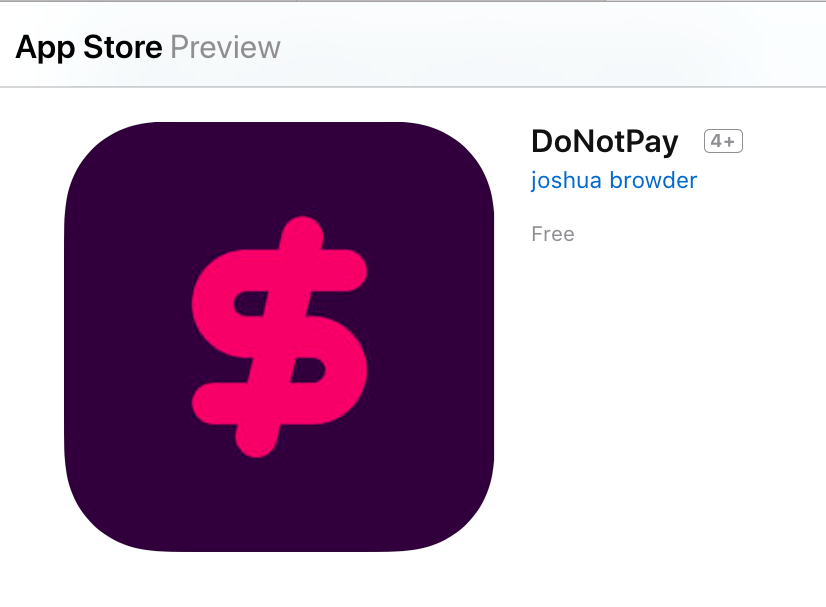 This was in effect a ‘helping hand’ system that showed people how to make a small claim, helped them fill in a basic court document, and then directed them to the nearest court to hand in their small claim.

The tech behind it was relatively simple, but it was effective. The idea was also not Earth-shattering, but it was perceptive and smart.

The new 14-in-one-ways-to-get-A2J-and-your-consumer-rights app is simply building on the same logic: to give people what is already theirs. What is meant by that?

Giving You What Is Already Yours

DoNotPay does not do anything that you could not do by yourself if you were motivated to do it and knew how to do it.

The right to make a small claim already exists. The civil procedures have already been put in place by jurisdictions all over the world. The case law is there already. The documents you need to complete already exist. It’s all there.

But, not everyone uses these analogue tools. Why? Because it’s difficult. It’s difficult to go from being someone who generally avoids legal issues and courts and claims and complex documents filled with jargon to becoming someone who actively seeks out a path through this legal world on your own.

It’s difficult because most people would assume that to get into the weird legal world they see on TV you need a lawyer. And – naturally – lawyers are expensive. So….nothing happens.

Rights that a democracy has created for itself sit unused, gathering dust. Systems put in place to help ALL PEOPLE – not just those who have inhouse lawyers, remain hardly touched by the very people they were designed to help.

What Browder and DoNotPay have done is brilliant in its simplicity and audacious in the way it says: ‘This is all yours already, why don’t you just take it? It’s free, we’re just going to help you use it.’

And perhaps this is one of the core issues of A2J? I.e. not that the justice system doesn’t work efficiently, or that lawyers are too expensive (which they are), but that people simply don’t know where to start, or how to engage and then move through even the most basic of legal or consumer rights procedures.

Artificial Lawyer had a quick chat with Browder about this, who adds: ‘The law is extremely inefficient. It leads to unequal outcomes and bureaucracy. But one positive thing I have always seen is that there are so many tools, from small claims court to consumer protection rights, that work in the favour of the average person.’

‘These tools are designed for someone to go at it alone, yet lots of people struggle to fight for their rights. DoNotPay is all about helping people use existing tools in the legal system. Anyone who claims it is “dangerous” to help someone sue in small claims court (which they could do anyway) is missing the point,’ he concludes.

OK. Let’s just have a look again at the list of those 14 applications (for now only downloadable in the US).

5. Earn refunds from Uber and Lyft when a driver takes a wrong turn.

6. Fix errors on your credit report.

7. Save money on over 20,000 prescription and over the counter drugs.

8. Scan your McDonalds, Jack In The Box, KFC and Carl’s Junior receipts for free fast food.

9. Find a California DMV Appointment in days rather than months.

10. Apply for a United States B2 Tourist Visa extension or Family Based Green Card.

11. Dispute fraudulent or low quality transactions with your bank.

13. Make money on your airline and hotel bookings with price protection.

Not a single one of the things above you could not do on your own. None of them give you new rights or powers that you did not already have (if you live in the right location).

All they do is encourage you to go out and get what someone else, somewhere in the vast sprawl of civic, justice and consumer organisations out there, has already created for public use, from overturning parking tickets, to exerting your rights in relation to late deliveries, to applying for a Green Card to live in the US.

Yet Browder’s logic is overpowering: why pay for what is already yours?

In short, most people (and most SMEs…) can’t afford a lawyer, and they don’t feel they can access justice, or even their consumer rights without some additional help. End result: a justice deficit that is not good for anyone and arguably hurts the economy and democracy itself.

Is DoNotPay a complete answer? No. But it shows the way forward in several ways.

Taking this forward, this further supports the many initiatives already underway to provide legal guidance and information to people and SMEs via digital platforms.

It adds credence to the view that many simpler legal processes can be partly automated, with ‘on-ramp’ sites and platforms that help people to complete forms, that are then automatically sent to the right places, reducing the time and expense of any legal procedure, from divorce to property purchases.

And it refocuses the legal world’s eyes on what this is all about: solving problems for a society that operates via a rules-based system. The purpose of the law is not to provide jobs for lawyers, or generate billable hours, there is no right to being a highly paid associate, there is no right for law firms to exist. All of this exists for one purpose: to serve the wider society and the economic and legal needs it generates. And that is something the legal world so often loses sight of.

Is DoNotPay the answer to all legal needs? No. Small claims are called that for a reason. Larger, more complex matters don’t fit into neat pathways like this. Consumer rights that don’t meet the pre-set protocols for repayment or compensation also can’t be solved with a neat iPhone app. Being able to fast-fill a legal form does not mean that somewhere in the legal ecosystem a human lawyer won’t still have to read it, process it, deal with it, and probably pass it on to another lawyer.

But, DoNotPay does point to a better way of doing things. It asks the question: why are we making it so hard for people to utilise this amazing thing our own society has created, known as ‘the law’?