This morning, what is probably the world’s most famous legal bot, DoNotPay, is launching in 1,000 legal areas across all 50 US states and also the UK.

As was exclusively revealed in May to Artificial Lawyer, DoNotPay founder, Joshua Browder had decided earlier this year to massively expand the bot to handle far more than the parking ticket appeal capability it had rose to fame on. Since its launch it had already added consumer law capabilities as well as providing help to refugees. 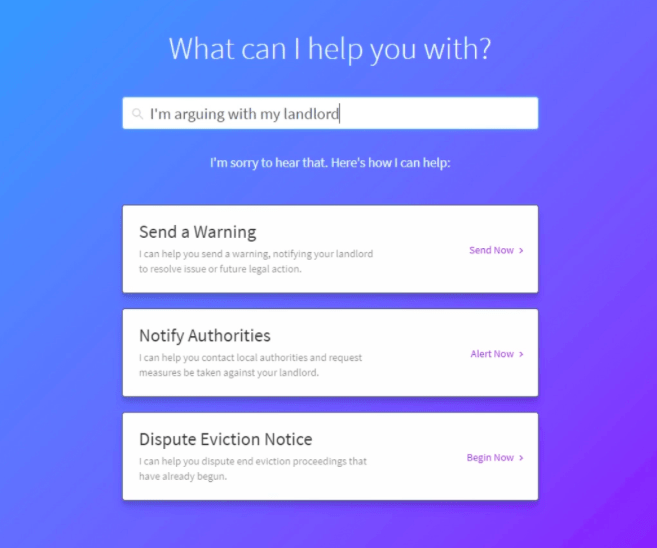 The new July rollout is the result of this plan and greatly expands the total number of areas where it can be of assistance. The new expansion will cover a much broader range of legal issues, from reporting harassment in the workplace to making complaints about landlords.

While the bot is not giving ‘legal advice’, at least from a strict regulatory point of view, it is designed to help a person move their legal issue forward by first identifying the problem, then using Q&A questions produced by the bot to gather the necessary data to make a simple, but relevant, document that can be used in that type of situation, for example a claim against a person or entity.

The tech used involves IBM Watson for some of its natural language processing capabilities. DoNotPay has also been using Facebook Messenger to host the bot.

In a message to Artificial Lawyer, British born, but currently US-based Stanford University student, Browder said: ‘The user can type in their issue in their own words (for example: “my airline scammed me” or “my employer is racist”) and receive immediate suggestions as to how DoNotPay can help.’

‘Once it knows the problem, the bot talks to the user to get the details and automatically generates a legally sound document which can be sent directly to the authorities. If the user needs more help, we will point them to the right direction (often a charity) within 24 hours.’

While clearly this is a bot working in the legal field, it is probably fair to say Browder has mixed feelings toward the legal profession. Or, as he says: ‘I originally started DoNotPay two years ago to fight my own parking tickets and became an accidental witness to how lawyers are exploiting human misery.’

‘From discrimination in Silicon Valley to the tragedy in London with an apartment building setting on fire, it seems the only people benefitting from injustice are a handful of lawyers. I hope that DoNotPay, by helping with these issues and many more, will ultimately give everyone the same legal power as the richest in society.’

In which case it is perhaps best to see DoNotPay 2.0, (or is it 3.0 now?) as very much an Access to Justice (#A2J) project, rather than seeking to build a consumer legal brand such as RocketLawyer, even if many of the practical uses of the legal bot are commercial in nature, e.g. helping in a dispute with an insurance company or airline. 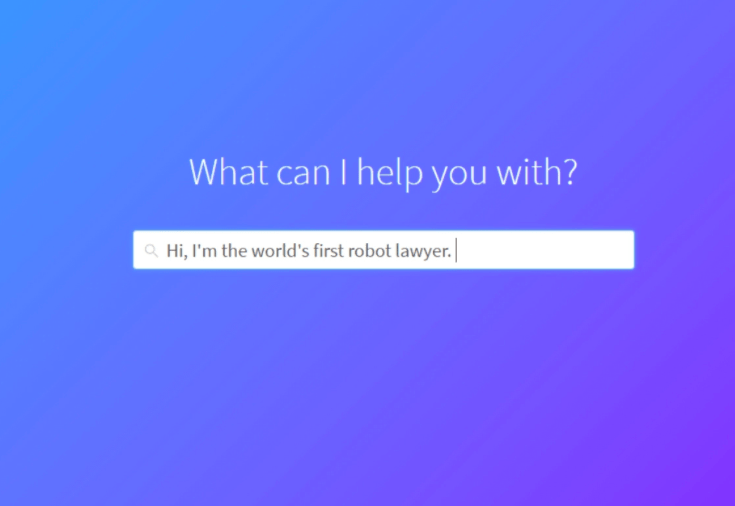 What seems to unite the many strands of the offering is the focus on addressing what Artificial Lawyer terms the issues of ‘information asymmetry’ and ‘inequality of arms’. That it to say, first, the general public simply has never been given the information they need to handle a legal dispute, so are immediately at a disadvantage.

Handling legal issues is not taught at school as part of the general curriculum. Legal information is often behind pay walls or framed in impenetrable jargon and generally presented as something the general public shouldn’t be seeking to understand without a lawyer’s input.

The other issue is ‘inequality of arms’, i.e. the insurance company has a team of hundreds of lawyers, the member of the public has none, or they can use a lawyer or claims company that may only want the case as part of a broader consumer claim without really taking an interest in the individual. The reality is that many people simply cannot get the right lawyer to help them, if any at all. This is the case in England & Wales where legal aid is not available for vast areas of the law, including employment and civil claims.

This is exactly the problem that Browder and DoNotPay want to solve. Speaking to Artificial Lawyer in May, Browder added that despite the expansion the original brand would stay in place.

‘For better or for worse, I think it’s a brand people know. It has gone from DoNotPay ‘Parking Tickets’ to DoNotPay ‘Lawyers’!’ he said. 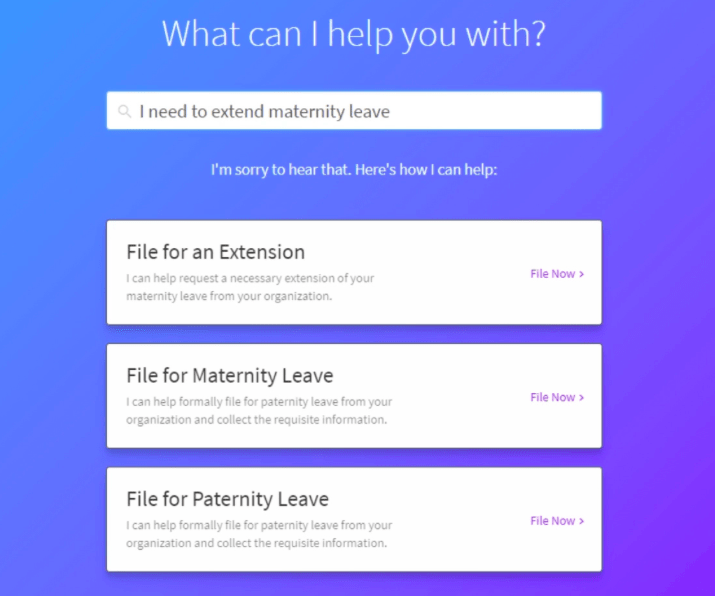 He also maintains that he will never charge for DoNotPay’s services, though he may then redirect users to other service providers, though as noted, the hoped for support will preferably be from charities.

Clearly this bot will not remove the need for legal advice once a dispute has escalated beyond the sending of the document to make a claim. For example, once the target of the claim responds, presumably with the intervention of their own lawyer, the user will then be under pressure to seek a lawyer as well, though a charity could help.

Moreover, although Browder’s legal bot performs very well in narrow Q&A fields, it can sometimes be prone to ‘communication breakdown’ when a user gives responses to the bot that have not been planned for, or are not recognised. This is often due to a limitation of the NLP program, which then tends to stop the flow of the process. It’s also the major challenge faced by all other bots, in the legal space or elsewhere.

Artificial Lawyer has tested out the bot’s earlier iterations and these Q&A limitations are likely to remain a challenge going forward. That said, it remains a superb project with A2J at its heart. Moreover, with continued machine learning in terms of the decision trees for each legal query, as well as improvements in NLP use, DoNotPay will improve the more people use it and the data set expands. 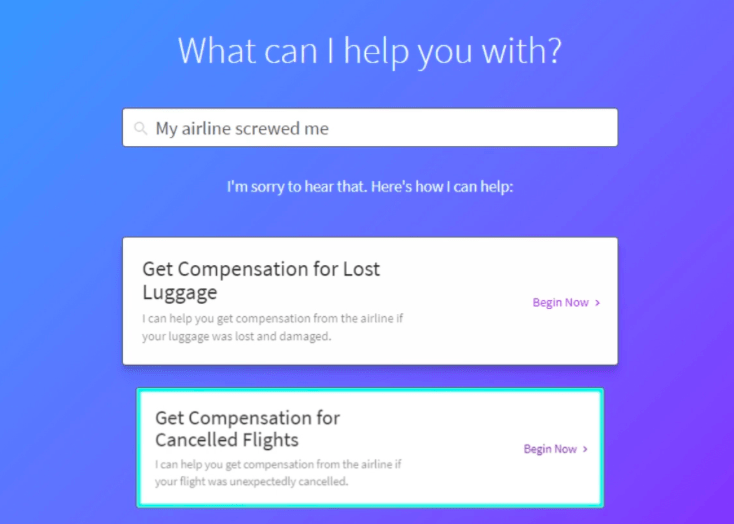 While critics may say that it is still at an early stage and hence is ‘not perfect yet’, the reality is that legal bots have indeed only just started to evolve and surely anything that at least helps a consumer is a very positive step. If this and other bots, such as UK-based, LawBot, can keep going through new iterations and improve in areas such as NLP and decision tree design then their value to consumers will likely grow rapidly.

That said, it’s important that the general public understands the limitations of bots and have realistic expectations of the services they can deliver, e.g. legal document/claim production. But, as said, this journey is just beginning. In two years DoNotPay has come a long way and will no doubt keep improving rapidly.

If you’d like to see a short video by DoNotPay about the new aims, please see below.