Although the deal was signed some weeks ago, the announcement follows almost immediately after the launch of a similar deal between rival consumer legal group, RocketLawyer and fellow smart contract leader OpenLaw (see analysis piece here).

LegalZoom said that the collaboration represents ‘an extension to their product offering, enabling users to access and use blockchain and non-blockchain computable contracting technologies’.

While for Clause the venture represents a huge extension of the technology into consumer-focused smart legal contract applications.

Clause has for some time now been working with major commercial law firms, in part through the Accord Project consortium, which it helped to create. It’s also been working with major tech companies such as IBM, and connecting with standards setting groups such as the IEEE – all with the purpose of bringing to working life the use of complex smart legal contracts.

The deal with a consumer legal group, which handles thousands of day to day legal issues, from employment contracts, to rental agreements, to wills, is a major expansion and moves Clause into the mainstream of the legal market. 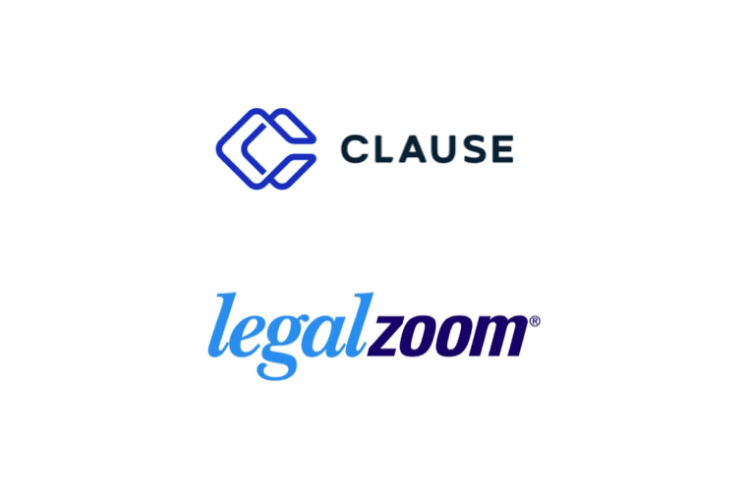 The new step, in parallel with the OpenLaw/RocketLawyer deal, also means that we now have two huge consumer legal platforms working with smart contracts.

And, as noted in an earlier story on Artificial Lawyer, digital signature giant DocuSign has just created an integration with Ethereum to provide blockchain IDs.

In short, the spike in smart contract and blockchain uptake by serious businesses operating in the legal world is continuing, if not accelerating.

The company went on to say: ‘LegalZoom will adopt the Clause technology and the Accord Project specification for representation of smart legal contracts, making documents available for editing, signing, and execution using the Clause API and platform. LegalZoom contracts will be augmented with Smart Clauses, enabling the contracts to perform blockchain-based transactions and integrate with web services such as accounting, invoicing, or payroll systems.’

Although, it’s understood that the transactions are not necessarily going to be ‘Ethereum-centric’ – one of the most popular blockchain platforms. This may instead suggest that transactions will operate with tech provided by IBM, with which Clause has built a close relationship (see here). And it’s worth pointing out that Clause has also always seen the potential for smart contracts to work without the need for a blockchain platform.

Commenting on the landmark move, Peter Hunn, Founder of Clause, said: ‘This development … will augment LegalZoom’s existing model with functionality that enables LegalZoom users to connect their existing business systems to contracts that are automatically executed when a milestone is achieved or a task completed.’

‘By teaming up with LegalZoom, the value of this technology can be brought to millions of small- and medium-sized businesses and individuals around the world,’ he added.

And, Vanessa Butnick Davis, VP and Legal Managing Product Counsel of LegalZoom, concluded: ‘LegalZoom’s North Star has always been to democratise law. Making sure every American and small business owner can access the same resources previously available only to larger corporations. This collaboration makes cutting-edge technology available to and useable by consumers and small businesses in ways previously unimaginable.’

And for anyone who is wondering where LegalZoom is now in terms of scale and client reach, check out these numbers: since its foundation over 15 years ago, LegalZoom has served over 4 million customers in the US and the UK, and now has over 1,200 employees.

The company also recently received a gigantic $500 million secondary investment led by Francisco Partners and GPI Capital, giving it huge support for further growth in the US and other key legal markets around the world.

Clearly then this smart contract partnership matters to both businesses and puts Clause in contact potentially with thousands of customers.