‘So this is Christmas, and what have you done?’ sang John Lennon in 1971. So, what have we all done in legal tech land this fine year?

Well, let’s have a think…..there’s a few things that come to mind, some of which are outlined below with links to the original stories in Artificial Lawyer.

What a year it’s been for money flowing into legal AI technology! There have been plenty of other investment deals into other areas of legal tech as well. But here’s a few of AL’s favourites:

When iManage merged with RAVN in June 2017 some people expected to see a wave of other legal AI mergers and takeovers. But, that didn’t happen, certainly not at any scale. But, then this year we have seen three interesting steps.

And, perhaps as a sign of how the market for legal AI and automation tech is expanding, so too Artificial Lawyer has been expanding, offering readers three new services this year, plus the first of a new series of AL Product Reviews, the first of which has been Kira Systems. Plus, this site was chosen to be in the ABA Journal’s Web 100 list. Also, next year, keep a look out for some interesting news in relation to Artificial Lawyer Events!

We have also seen blockchain and smart contract technology make some important strides in 2018, taking things to a new level of buy-in from major players. We also saw some of the first signs of real world applications, not just pilots. Here are a few items that caught AL’s eye this year. 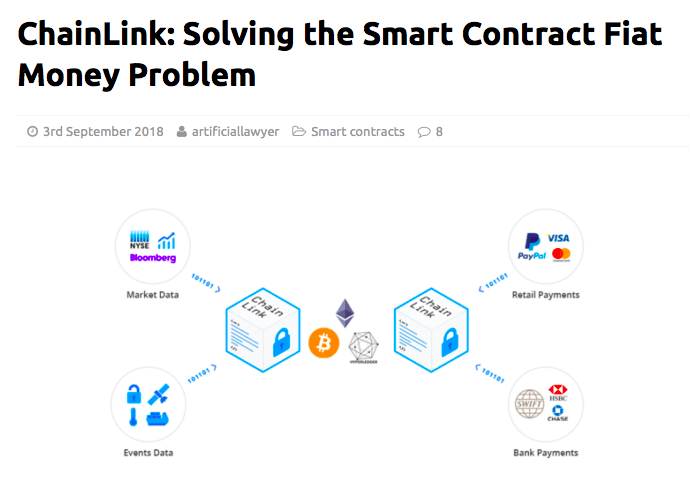 2018 has also been the year when the effort to develop regulation to support – and sometimes control – AI tools and applications went into overdrive. We’ve also seen a wave of research projects designed to help support legal tech adoption, such as the UK’s Law Tech Delivery Panel. Here’s some other ones:

Incubators and innovation spaces at firms such as Allen & Overy and Mishcon de Reya continued to do well, supporting new waves of startups and generally helping lawyers to see the benefits of all this technology. We also saw others getting involved in investment and/or tech company support.

The Big Four Knock on the Door (Again)

The Big Four (once upon a time the Big Five) have been exploring the legal world since the late-1990s. Today there has never been more attention on what they are doing, perhaps because they are now incorporating plenty of new technology into their offering to clients, such as legal AI doc review and more. They are also expanding more rapidly than before, as seen with the acquisition of Riverview Law by EY this year. AL’s impression from talking to the Big Four is that their goals are not to wipe out traditional law firms as some headline writers seem to suggest and some firms fear, they are simply (and quite logically) building out a legal service that helps their clients and that can, when needed, work alongside their other service lines. They also really understand the legal labour pyramid and how technology fits into this (see below). 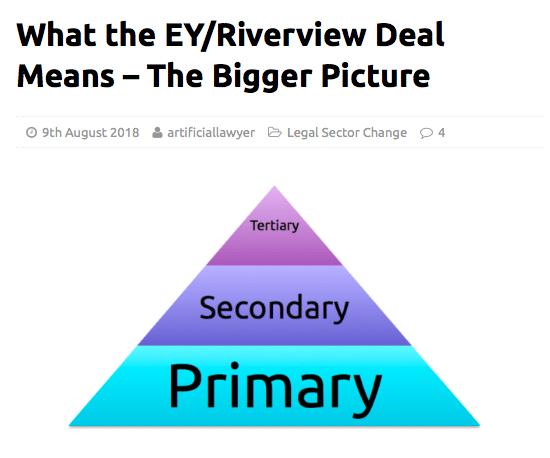 Other Bits and Bobs

Aside from the broader themes that are emerging above, we have also seen some interesting developments that are more singular, but equally of note in a review of 2018.

Whichever way you look at it, 2018 has been a tremendous year for legal tech and especially those parts of it that focus on ‘changing the means of legal production‘, as AL likes to say. There has been so much change, so much activity, it’s a full time job just keeping track of all the things going on.

It’s been a real pleasure meeting, and talking, and working, with you all, all around the world. Thank you for your readership, thank you for engaging and being part of the Artificial Lawyer global community of legal innovators.

I really look forward to engaging with you all in 2019 as the market no doubt will move through many new changes, some expected, and some that we cannot even guess at today. Whatever happens, it will be exciting.

Artificial Lawyer wishes you a very Merry Christmas and Festive period, and hopes that you have a very happy New Year!

(*** P.S. Artificial Lawyer will be there for everyone throughout the holidays, but normal publishing will recommence 7th Jan 2019. See you all then!)