Smart contract pioneer Agrello has become the first dedicated legal tech company in the world to launch its own digital currency, known as Delta.

The millions of dollars’ worth of Delta tokens will be used to support the growth of the Agrello smart contract platform, such as for paying lawyers for helping to develop legal smart contract templates, as well as using the new currency for functional payment use and retaining a tradable value just like other digital currencies such as Bitcoin.

The combination of smart contract technology and digital currencies is not new in itself, for example, Ethereum was developed with a focus on developing blockchain-based contracts while also having a tradable currency, though often with a rather Utopian vision of a jurisdicitionless crypto-economy that did not need lawyers to be at the heart of the process.

However, Agrello started specifically as a legal tech company focused on real world contractual agreements with the aim of using its own digital currency to underwrite and empower its users, many of whom it is hoped will be lawyers and corporates.

One might say this is an attempt to bring the use of cryptocurrencies and on-chain contracts back down to Earth and to the very pragmatic and ‘real world’ needs and requirements of the legal market, rather than remaining with an often idealistic view of an on-chain contract-based economy without the need for lawyers, statute law and national jurisdictions, that some blockchain enthusiasts still hold to.

There are also currently several legal tech companies developing smart contracts and contracting automation tools (CATs) that operate broadly in the same field in terms of automated/self-executing legal agreements. But none have gone so far as to launch their own currencies, even if some can be used with/link to on-chain systems.

Agrello is the brainchild of a group of Estonian legal experts, academics and technologists. The project lead, Hando Rand, in an interview with Artificial Lawyer said: ‘I was studying law and started working on contracts. As I was also very interested in IT, I saw a lot of similarities in assembling a contract and program code. It started 2014.’

‘I wanted to build a bridge [between these two worlds of contract and code] and started deeply studying it. I also was working on import-export deals, where a proper escrow was needed, but I was struggling to find a proper service. Thus, I thought of a smart contracting system that could also solve that. I was then also close to Alex Norta (now Agrello’s Chief Scientist) who had over 15 years of scientific work on the matter,’ he added.

The Agrello platform seeks to be a complete smart contracting system for lawyers and businesses with multiple aspects. On one level it is focused on the creation and utilisation of legal contract templates, which are made by lawyers around the world. The aim is that lawyers in every major jurisdiction will ensure the templates are legally enforceable in that country, something that has been a challenge with ad hoc blockchain contracts made by non-lawyers.

The templates are also given a ‘computable contract’ dimension, allowing contractual information to be digitised and connected to a blockchain, though it is understood that not all data will be on-chain.

There is also what the company calls an AI agent, acting as a personal counsellor within the platform. The AI agent guides you through your agreement, notifies you of your legal duties and rights, and identifies contract obligations that can be automated and executes them on your behalf. 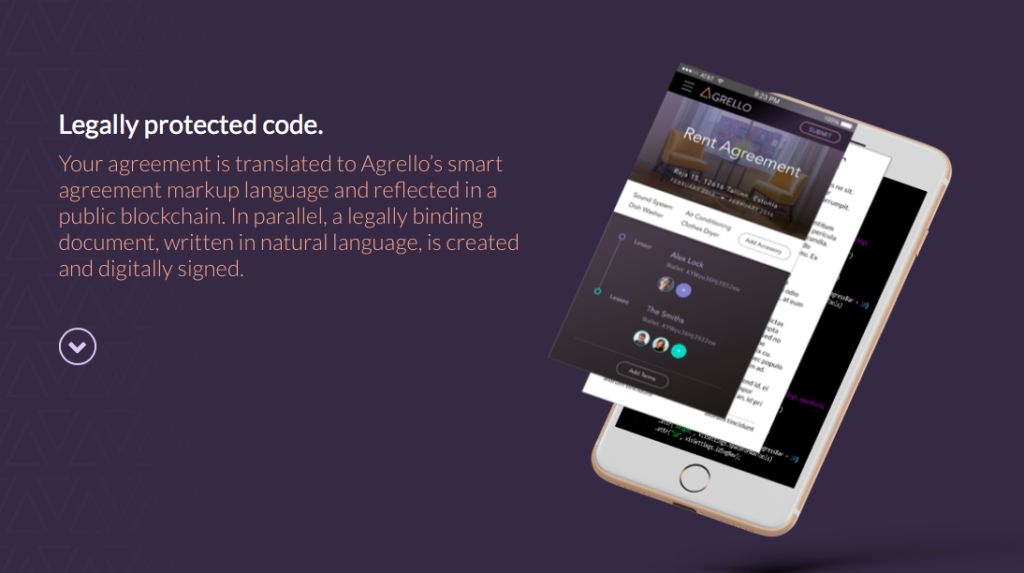 Lawyers will be paid in Delta to help produce and update what is for now a limited range of contracts to be used globally. These initially will be in areas such as rental, loan and sales agreements. The Delta tokens also act as both a currency for transactions and also as a form of ‘marker’ that engages with Agrello’s platform, providing a transactional information trail.

Or, to use the words of Agrello: ‘The Delta token provides three primary network functions. First, it enables value flows between the on-chain and off-chain protocol dynamics for users and template developers, allowing users to enable specific features and create incentive mechanisms for developers in the ecosystem.’

‘Second, the Delta token creates network effects between the users of the platform and seeks to encourage a vibrant community of template developers and template reviewers. As such, the Delta token should be considered a native and internal token to the Agrello protocol.’

‘Lastly, the Delta token acts as a secure and verifiable value transfer, to secure deposits in different currencies and across different blockchain protocols.’

All in all, it’s an impressive and highly ambitious project, made all the more so by launching its own currency. Moreover, the company appears to have very quickly made a success of its ICO. It will be interesting to see what happens next and whether other legal tech companies will also seek to create their own currencies for use with smart contract platforms.

If you would like to know more about Agrello, please see the video below.